I stumbled across a petition on Change.org started by a fellow blogger whom I happen to adore. I've met her. I've laughed with her. I've slept in the same hotel room with her. I find her intelligent and quite glorious.

I don't like her petition... though I may be in the minority.

The petition is to Francesca Bellettini, the CEO of Yves Saint Laurent with this request: "Do not use anorexic models in your advertisements anymore." She also wrote a blog post about it here.

My problem is that the petition was inspired by a photo of a thin model in an ad, and we don't know that this young woman is actually anorexic. Perhaps the genes she inherited, combined with her youth, keeps her rail thin. Isn't assuming all skinny girls are anorexic just as bad as assuming all bigger girls are lazy?

What really bothered me were some of the comments that I read on the petition page:

Too many in the world are truly starving. This picture is disgusting and absolutely not something that should be advertised as beautiful!!

...sickly, weak, image that makes a female appear to be an unhealthy pre-pubescent boy...

That is not what normal people look like, I guess you guys do not go outside alot, also it sends the wrong message to young girls about what is beautiful

I do not know who in the YSL organization picked such a model or this photo as representative of beauty. It looks like a concentration camp victim.

No twigs; curves are beautiful.

The comments go on and on and on...

Here's a picture stolen from my senior year yearbook of me stringing lights on a reindeer. 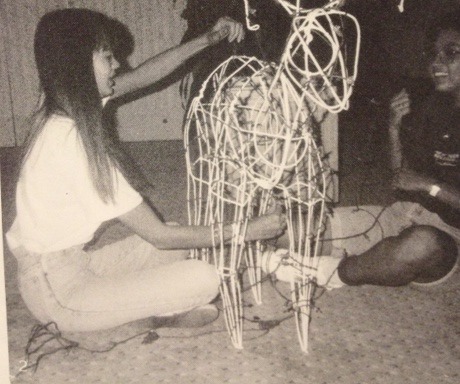 I was a thin girl.

I was an active teenager who was training in dance and had thin parents.

I also ate four large meals a day, numerous snacks and spent several months on weight gain shakes so the name-calling would stop. It didn't.

I know that "Aw, poor skinny girl" is not the majority sentiment, but body issues and self esteem have never been beholden to body type.

I'm not going to lie, being thin did open doors for me and I was able to walk through those doors and enjoy a short career in the fashion industry. 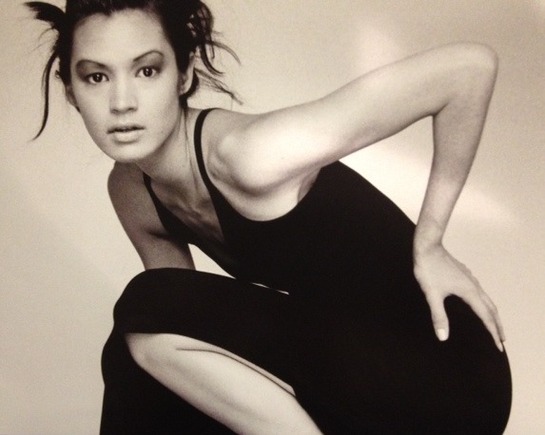 I made a good bit of money in a short amount of time, and well into my 20s, I would still walk down the street and hear other women throw over their shoulder, "Eat a sandwich."

In Shannon's post that I linked to above, she calls the use of very thin models cruel, and even "cruel for the girl in this photo, as booking this job has affirmed for her that if she's skinny enough, she'll work. She'll think twice about eating even one healthy meal a day fearing if she gains an ounce she'll be unemployed." The assumption is perpetuated that very thin girls don't eat a single healthy meal in a given day. Assumptions based on what people look like is not the message I think we should be sending.

I'm not saying the industry doesn't dangerously favor a certain body type -- it certainly does. The professional dance world does as well. However, I do believe it's changing, and there are companies out there like Dove that have been on the forefront of that change.

But banning thin models and calling them anorexic isn't the answer. Plus, it will never happen. Thin-ness isn't the enemy -- exclusivity is. Instead of banning one body type, we should instead be demanding all body types.

I know that the knee-jerk tendency is to put down one to uplift another and that often, the pendulum swings high toward both extremes before settling in the middle. But I would caution against this particular fight being one of those times.

I worry for the girls out there who are like I was -- who are suffering from the same self-esteem issues that most teenagers do, and are being told they are ugly not only by their teasing peers, but by adults around them who are crusading for change.

I'd like to note here that I no longer have to worry about being called "toothpick". Birthing two children, a sedentary lifestyle and a middle-aged metabolism has taken care of that. Also, the original version of this post was first run on MommyNaniBooboo.com.