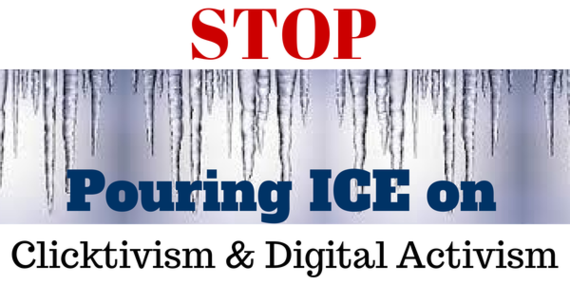 What do Justin Timberlake, Oprah Winfrey, the Kennedys and Bill Gates all have in common? They have all dumped a bucket of ice water over their heads this summer, to raise awareness for amyotrophic lateral sclerosis (ALS), also known as Lou Gehrig's Disease.

The ice bucket challenge isn't exactly new, according to the Wall Street Journal. It began last year on the professional golf circuit, but took off this summer when former Boston College baseball stand-out Pete Frates shared it on Facebook. Pro baseball players who knew Pete from his college days took and shared the challenge, and it from there it didn't just snowball -- it became an avalanche.

The point of the challenge is to raise awareness through the ridiculous act of pouring ice water over your head, catching it on video, and sharing via social networks. Participants then nominate three (or more) others to take the challenge warning, "You have 24 hours to accept, or donate $100!"

If you are even mildly active on social media, posts of friends and celebrities taking the ice bucket challenge have been virtually inescapable in the past two-and-a-half weeks -- you may even have taken the challenge yourself.

However, also difficult to escape has been criticism for the challenge, its flaws, and doubts about its effectiveness. Even as the evidence that it was clearly working has piled up.

Even though most, if not all, who've taken the challenge also donated to the cause, the only mention of money in most of the videos is the $100 donation due if you stay warm and dry over the following 24 hours, which makes it seem like those taking the challenge are trying to avoid donating.

At the same time there are those who condemn the movement as a wasted effort, just another example of "clicktivism" at its finest. Clicktivism, slacktivism, hashtag activism... whatever you want to call it, it's meant as a derogatory term -- though it shouldn't be.

The Oxford English Dictionary defines "clicktivism" as "the use of social media and other online methods to promote a cause." But Clicktivist.org clarifies:

"Clicktivism is not exclusively the support or promotion of a cause online. It is the use of digital media for facilitating social change and activism. More often than not this takes the form of supporting and promoting a cause on social media, but it can include a whole a range of activities..."

Yet the idea that most critics have is that clicking a button to "share" something is worthless, and people should get out from behind their screens and DO something. But what are they supposed to do? What beyond spreading awareness and raising funds to help those who are doing the research CAN people do?

It's a serious issue in our sector, this criticism of hashtag activism, and it needs to stop. What the ice bucket challenge is showing us is just what slacktivism/clicktivism can accomplish. When designed and harnessed correctly, these types of social media campaigns are exactly how awareness is created.

So why are we criticizing when the proof is in the numbers?

While those taking the challenge may not always state that they are donating, they clearly are. The numbers are mind-blowing: $15.6 million raised from July 29 to August 18, with $8 million raised between August 14 and 18 alone!

To put it into perspective, that's 800 percent over what was raised during the same period last year. It's hard to argue with that kind of success rate.

So what is behind all the negativity surrounding this challenge? Is it jealousy or sour grapes because our organizations aren't reaping the same benefits as the ALS Association? Hopefully we're better than that. But then why aren't we thrilled at the potential we're seeing unfold this season?

No. Of course, we want and need funds for our causes and organizations. But consider this: awareness is never wasted. Caitlin Dewey of the Washington Post said,

"Despite the oft-repeated claim that awareness does nothing, it almost always does something -- something small, perhaps, but something measurable."

Image from Pete Frate's Facebook page -- "I think we are making a difference." Yes. You are.

In this case it did something big and measurable, but let's broaden our perspective for a moment.

The reality is, overexposure is necessary in this day and age of constant information. It takes seven to eight exposures, on average, to motivate someone to take action. So any help with awareness is a boon.

The goal of clicktivism isn't to solve problems; it's to bring awareness to a cause that we otherwise wouldn't know about. This is the kind of activism that got us talking about Boko Haram (#BringBackOurGirls), gun violence (#NotOneMore), invisible children (#Kony2012) and other causes.

Sometimes voicing dissent (or support) is the only power we have. To call it meaningless or lazy is just another way of keeping progress at bay, and to alienate potential allies.

Engagement is a living entity. Your movement may start with a simple retweet, but guided by the hands of a savvy nonprofit marketing or engagement specialist, each small next step helps to cultivate clicktivists for your cause.

Will those clicktivists produce an 800 percent increase in tangible donations? Maybe, maybe not. But when it costs you NOTHING, isn't it worth trying when you have a model like this to follow?

While the doubters doubt, there are others who criticize the "look at me" aspect of the challenge. Just donate and call it a day, is their attitude.

But it's important to recognize that it's the zaniness of the videos that's catching most people's attention. ALS isn't a new disease -- so why is the ALS Association breaking fundraising records this year? Because it's worth $10, $100 or $1000 to watch your friends scream when ice water is dumped on their heads.

Not many people opt out of the video -- even if they give $100 or more to the charity. Though that's created another issue with opponents; All that water and ice seems a little "in your face" -- a luxurious waste -- when vast portions of the country are dealing with massive drought (and other areas globally don't have clean water to speak of). I am not a proponent of wasting water or another natural resource, but, did you know that raising a pound of beef takes 2400 gallons of water? Are those criticizing the water wastage going without steaks or burgers? I doubt it.

The critics have a point here, but this isn't a challenge created by the ALS Association, who might have chosen to be more mindful about it. This was a grassroots movement that has taken on a life of its own.

But the point is there are ways to take the challenge and raise awareness while remaining sensitive to the current realities faced by others. And when you create your organization's challenge, you can do whatever you find most humane, but know that, there will always be those who will find something worth being critical of.

Yes, This Can Be Replaced

Though those pesky naysayers are claiming it's not a real success if you can't convert these hashtag activists into taking more actions. More? What more do you want? An 800 percent increase in funds and 307,598 new donors isn't enough?

Instead of criticizing this enormously successful moment in social fundraising, we should be criticizing the lack of creativity and lack of engagement in ourselves. It could as easily have been our organizations had we just opened ourselves up to the possibility.

Instead of nitpicking, we should be looking for opportunities to encourage the small acts of kindness that have the potential to become sweeping waves of generosity. We should be celebrating this incredible victory on behalf of all nonprofits, and recognize that this IS capturing audience, and the only problem here is the way we're looking at it.

I mean, how can something that inspired this kind of effort by Bill Gates be anything less than a triumph? The ice bucket challenge is raising awareness by being inclusive, fun, humorous, and touching. It is a true viral offline/online campaign, and a great blueprint for other nonprofits to follow.

Not everyone is going to be able to give in Bill Gates fashion, which makes it even sweeter that clicktivism and the power of social can give nonprofits the same reach and potential as a multi-billion dollar corporation with a huge marketing budget.

Every little bit adds up, so if we can find ways to keep our message meaningful over a longer period of time, we allow for that momentum to happen. Maybe by engaging and using these hashtag activists to amplify our message -- even if they are unable to give -- we can do just that.

Remember, no matter what we do and how well we do it, there will always be those who will find fault. But if we listen to every criticism we'll stop ourselves from taking risks and seeking innovation, and that is not the kind of society we want to become.

If we instead spend our energy looking for solutions, I guarantee we'll find our own versions of the ice bucket challenge and its subsequent success.

For detailed tactics on replicating the success of the ice bucket challenge, visit the Social Media for Nonprofits blog.

See a compilation of just some who've taken the challenge here.