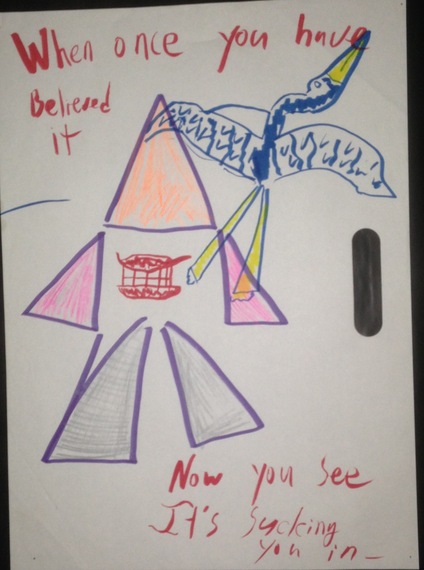 If catching up after a sick day is merely stressful, the cleanup for a few sick years feels positively herculean. I find myself in 2015 grossly familiar with where I've been. So like Charlie Brown and his football, I'm putting my trust back into the internet and hoping for connection. I'm asking for help in figuring out where I'm going.

I put so much of myself online, for so long, that I woke up one day in 2011 with nothing left. I spent the year following as a couch cushion, a soft fixture of my own red velvet sectional and the leather davenports of too many trained professionals.

There were the guinea pig months, where every fortnight heralded a new chemical cure with side effects worse than the initial illness. Two years of glacial gains and mudslide setbacks, cut with an endless bog of unactable ideas.

Incapacitation, for me, felt like being slowly drowned in my own ambitions. First I lost my will to put my thoughts on paper, which left my flowers of inspiration to bloom and rot under the cartoon lightbulb in my head. The world divided into things I wanted to do and things I could do, with little overlap. The cavern between desire and ability grew so large that a trip to the bank required as much planning as an alpine hike, and left me just as drained.

So I stopped worrying that I wasn't a part of the world, and turned my focus to how I had gotten to this point and what I would do when past it. The answers were linked. I had burned myself out as a blogger, and blogging is a reactive medium. Events happened, I reported them. Artists created, I critiqued them. Gay culture was an assault, and I was leading the defense.

I was fighting Them, for Us.

They strike, I perry. They advance, I beat. Sleeping with one eye open, exhausted and wary to stay current, I finally asked myself, "How long do you keep making the second move before you ask what you're running from?"

I was so busy reacting to the world around me that I ceased to be a part of it, and it was here that my infirmitude gave me a boon. The nature of my illness at that time, combined with its first wildly exacerbating attempt at treatment, set me out in a car for three weeks to get out of a few bad situations in a few different homes and re-experience the world of the living.

I drove from Chicago to a frigid Madison in mid-February 2012 and spent the next two weeks chasing the spring down to Georgia. When I wasn't making bad decisions in gay bars and thrift stores, I thought.

I thought while chain-smoking at 4:00 a.m. in a dark highway between Louisville and Nashville. I thought in hotel rooms and thought so hard and slept so long I thought myself out of the daylight. I holed up at the Athens Days Inn for 36 hours with the shades down, with a box of crayons and a blank sketchbook, and thought until I remembered what it meant to share a piece of myself without fearing my audience.

I've spent three years trying to grasp what I learned over the course of those three weeks, and the only way I can share it now is by telling you a story. It's a story I told myself during a period of time when I deemed it OK to treat myself like a child, albeit a child who'd read The Republic.

The artists and poets over there, painters and storytellers, musicians and dreamers, revolutionaries and leaders, would pluck out a piece of their soul and fling it across the chasm for their subjects on the other side. And when it landed, this song or movie, this idea or inspiration, those in the land of reaction would jump on it and each try to claim a little piece for themselves.

Unable to cross the chasm of pain and hard work, they stay where they are and tear up what lands at their feet, twisting and turning the organs of another's genius until they could present it, gored beyond recognition, as their own.

Such atrocities I'd committed there! An American president once said that the credit belongs to the man in the arena, and I'd found the illusion of apex at the tailgate. I still put thoughts online after this, interviewed musicians and made cat videos, but I couldn't find joy in them. I couldn't shake the idea that every second in the land of reaction sunk my feet another inch in the mud, and soon I'd lose the ability to cross forever.

Stability is a poor synonym for recovery, but I'm better these days. Fifteen months ago, the last hard hit I took woke me up and I decided to make a small, old dream a reality. I'm tackling a line by line rewrite of T.S. Eliot's "The Wasteland" as "White Gayland" a critique of the contemporary dominant gay culture. It's hardly a whole-cloth miracle to draw over someone else's blueprint, but I wanted the challenge of condensing 10 years of experience into a handful of stanzas. I wanted to write something I was proud of, something that wouldn't spoil after a week on the windowsill.

I finished part one of five, and couldn't find anywhere to publish. I'm highly unfamiliar with the literary and poetic world, and know from experience how most creative writing is received on most popular blogs. So I repeated an old mistake; I'm starting my own blog.

A continuation of my last blog, TheNewGay.net, I've started up TNG2.com as a home for aspiring creators with no place to go. My attempts to cross the gap from reactivity to creativity will begin with the next four parts of "White Gayland" interspersed with "A Different Dolphin," a serialized gay children's book written by New York City artist Aaron Clippinger and illustrated by myself.

This is the scariest thing I've done, including posing for Fleshbot and interviewing Stephin Merritt. Art lives longer than people, than articles, than tweets or likes or shouting matches, longer than any news segment or opinion piece, than protests, than riots, than wars, than fantasy or reality, than our children or our pets.

I'd like to have a home base for the creators outside of Buzzfeed, of social media, of "Internet famous," of "How many followers?" or "Where've you been linked?" A place for original work and unpopular perspectives, for video and visual art and whatever comes after, a place for those who don't fit in, who don't have a base, who have whole worlds inside of them and no venue for release.

I don't know exactly what I'm asking for, because I haven't seen yet. Only you, the creator, know what's in store. I just ask if this resonates with you -- If you've also longed to take the long hike down the slope of reaction and up the hill of true magic, but feared rejection by those already there -- let's journey together.

If this resonates with you, shoot a note to Zack@tng2.com. There's no deadline pressure, no weekly posts, no shitting out an anecdote to meet someone else's deadline. Just present me with your own best self and let's hope that, together, we can build our own endpoint.