When I was in third grade, my teacher instituted a Mini Economy in our classroom, and I started a library, planning to exploit my enormous collection of Misty of Chincoteague and American Girl books. When the first due date arrived, I realized my mistake: One of my favorite books had been returned in shreds, a huge split down the middle of the spine dividing the first half of the pages from the second. It was held together by mere threads.

I don’t recall who left my book in such tatters, but I do know one thing: A fierce protective instinct awoke in me that day. In the nearly two decades since, I’ve acquired stacks on stacks of books, but I rarely lend them out. The more I love them, the more I resist lending them.

Seem harsh? Maybe! (Ask my boyfriend, who once got snapped at for innocently asking to borrow my new hardcover Alice Munro collection.) It’s my small personal reaction to what I see as a widespread issue: the mishandling and mistreatment of books.

Before the third-grade lending library debacle, it had simply never occurred to me that someone might treat a book so brutally. My house was lined with books, the combined collection of my father and mother, who both had postgraduate degrees in English literature, and I couldn’t recall seeing a book in such a state. Well-read, yes; falling apart, no. I used bookmarks. I held stiff new books only partly open to avoiding breaking the spine and creating a permanent chalky line down the back. I used to remove dust jackets to protect them, but ultimately found it was more effective to leave the cover on, but ensure it remained properly aligned so the edges didn’t become creased and bent.

Not everyone feels this way. I’ve seen books with large food stains, recklessly heavy pen underlining and insipid commentary throughout (Oh, is the scarlet letter really a metaphor? Is it, previous owner of this book??), utterly destroyed spines, curling or creased covers and dozens of dog-eared pages. If those books belong to their destroyers, it’s absolutely their right to do so. But I don’t have to like it.

Especially since a lot of those book batterers are infusing the whole book ecosystem with their roughed-up texts. In my experience, the book belonging to a generous friend won’t necessarily prevent the borrower from despoiling it, even if they mean well. If your attitude is that books were made to be broken, you're going to handle them that way, even if you intend to be more careful with your friend's loaner.

Plus, these people are donating and selling their old books, regardless of whether they've effectively made it useless to other readers. One used book seller told the Guardian in April that "[h]is network of warehouses is bringing in, on average, 15 semi-trailer trucks full of used books every day, but less than 20 percent of those books arrive in saleable condition."

That includes an initial culling of "books that are totally destroyed," followed by others, due to "the poor state many of them arrive in, of course." Of course. This must be an enormous quantity of books pulped due to overly enthusiastic spine-breaking and dog-earing, yet the ones that sneak their way onto used bookstore shelves still aren't exactly in fantastic condition. Where can a gal get a good used book?

If your attitude is that books were made to be broken, you're going to handle them that way.

In college, on a budget, I’d search through the stacks of used books being sold for my seminar for the least damaged copy, but there was rarely one as kindly treated as I’d prefer. I’ve purchased secondhand books with words scratched out by some ballpoint-wielding moral crusader, large neon stickers proclaiming “USED” plastered on the spines, and laminate peeling off the abused paperback covers.

Many have argued that mutilating a book is an essential part of reading. “It's time to stop fetishizing books as sacred objects and start happily defacing them,” declared the subhed of a pro-marginalia manifesto by Laura Miller on Salon. She makes a solid case for the benefit of marginalia -- though personally, I find that the vast majority of margin notes, both third-party and self-inflicted, don’t add much and can actually be a distraction. There are those instances however, when they’re priceless, like the notes made by famous authors on each other’s books, or, more poignantly, in cases like this, from Miller's piece: “A woman … had inherited her late, beloved grandmother’s library of heavily annotated fiction and nonfiction books. She said that reading them was like being able to talk with her favorite grandparent again.”

Writer and professor Tim Parks has championed marginalia for their benefit to the reader, encouraging a closer, more critical attention to the text. If it helps a reader engage with a book, that is surely the highest goal -- and in my mind, the essential integrity of the book remains, provided the added notes aren’t too aggressively inked. Personally, I prefer to take notes in a separate notebook, but I’ll also lightly pencil notes in the margin. My notes, I believe, should be an unobtrusive sideshow, not an obnoxious streaker in black ink dominating the page.

Still, let's set marginalia aside: at least it's promoting active engagement with the text.

What about the concept that a tattered, dog-eared book has simply been “well-loved”? “A perfectly maintained book is akin to online reading: You can see it, but you can’t really feel it,” wrote Sheena Sidhu on Thought Catalog. “I view books as things to be used. To be marked with love and the signs of use,” argued a librarian blogger.

“Things to be used,” to me, doesn’t capture the value and power of a book. Some objects, at least, deserve more than to be recklessly ruined. A couple of years ago, as I rode the subway home, I noticed that the string of pearls I was wearing had been damaged -- each pearl, in fact, was chipped. The pearls had belonged to my late mother, and I’d been wearing them nearly constantly for years, a talisman and a favorite accessory. I was hysterical. My boyfriend, with the best possible intentions, tried to calm me down. “They’re meant to be worn,” he reminded me. “It’s better that you loved them and wore them out than if you’d let them sit in a box.” I (literally) swallowed tears and nodded. That sounded right.

Still … what if I could still wear them? What if I’d pampered them, wiped them after each use with a soft cloth and stored them wrapped in velvet? I hadn’t respected the pearls, their needs and limits. I’d run them ragged until they gave out.

That might sound insane, but years later, after reading Marie Kondo's The Life-Changing Magic of Tidying Up, this seems more true to me every day. Kondo’s focus on tidying up arises from an animistic worldview that values each object’s dignity and, for lack of a better term, feelings. A string of pearls is happier wiped and gently put away than left in a pile on the dresser after hours around a sweaty neck. A book is happier handled gently and slotted neatly next to its friends than bent, falling apart, and shoved onto an over-jammed shelf.

When it comes to books, I’ve always on some level believed this. Books act almost as living, feeling beings in my life, so why abuse them? Most of my books are nearly immaculate, spines unbroken and pages free of dog-ears. Among this collection, the beaten-up novels and philosophy tracts I bought secondhand for college courses stand out. And I have to admit, seeing their loose covers and scuffed corners on my bookcase brings me something less than unalloyed joy.

Again, other people can treat their books as they wish, but remember that this general laissez-faire attitude about book maintenance trickles down. Lending a treasured book to a friend with the request that it please, please be returned in pristine condition isn’t enough when your friend thinks a heavily scuffed dustjacket and stained page edges qualifies as “pristine.” Buying a book someone has seen fit to sell to a used bookstore shouldn’t leave you baffled by passages obliterated by that same overly aggressive first reader (yes, I’m still bitter).

My books are read. They’re loved. And they’re carefully preserved so that they can be read and loved again, by myself or by friends or future children -- or used bookstore shoppers. I don’t show my love for people by abusing them (right, friends and family?), so why would I show love for my beloved books by manhandling them? My books are loved whenever I read them, turn back to favorite passages, pencil in notes, slip in Post-Its, survey their neat rows on my bookcases, talk about them with friends, and think about giving my well-loved and maintained favorites to my kids one day.

My memories don’t need to be marked in wrinkled pages or soup stains; they’re embedded in the familiar text on familiar, time-softened pages -- all of which have been handled firmly but gently. As it’s becoming conventional wisdom that loving a book entails, essentially, chewing it up and spitting it out, I ask everyone to consider being nice to their books. They’re being nice to you.

You Don't Have To Destroy A Book To Love It: A Plea To Readers
Cute Kid Notes 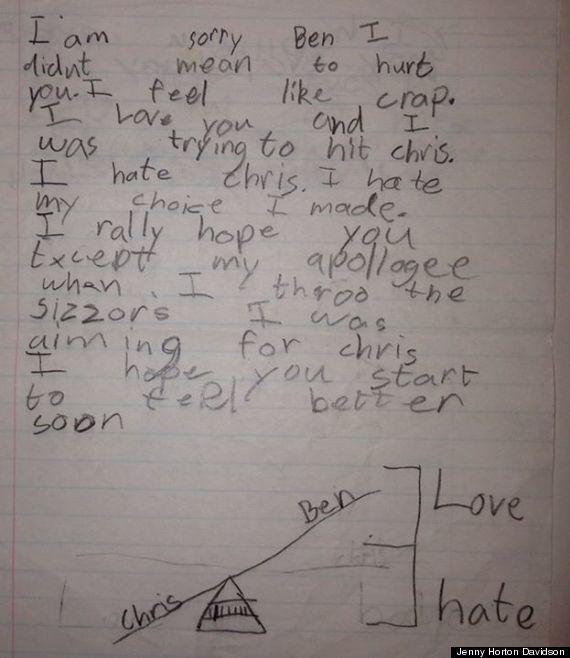