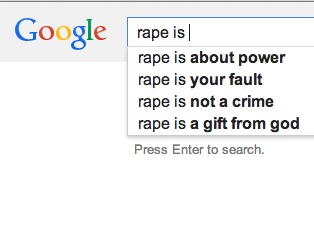 Using the word "rape" to describe anything other than the act of sexual violence is not only wrong, it is irresponsible. I have been hearing a lot of people throw the word "rape" around in a casual manner. Generally it is in contexts like this:

"Oh, did you see the game last night? [Team] totally got RAPED!"

"If we ever get invaded by [Country], I'm killing myself. I don't want to get raped in the ass!"

"Hell yeah! We raped those motherfuckers! You want to play again?"

Most of the time, I hear men saying these things. Often, these are good, respectful men who I am positive don't intend anything negative by throwing the word around. These are my friends, my coworkers -- people I respect and admire. I'm left in these situations wondering simultaneously why the hell can they think co-opting this word is okay and whether or not I should speak up. Well, I'm speaking up today.

I have been sexually assaulted three times. I have never spoken publicly about my abuse until now. Because I want to put a face to this crime. I want to contextualize the suffering that 1 out of every 4 American women have experienced firsthand. I am one of these women. I am a daughter, a sister, a friend. It is extremely difficult for me to open up about these experiences, but I feel very strongly that the more shame we feel and the more we hide, the less people will understand how serious rape is. I'm speaking out because I don't want to hear anyone misuse the word "rape" anymore.

The first time I was raped, I was 16 on a spring break trip with a friend. We were accompanied by adults, but were given the freedom to drive a rental car as long as we were home by 11 p.m. At 16, our hormones were raging and we wanted to find some cute boys. We wanted to flirt. Maybe we wanted to steal some kisses. We met an older guy on the beach, who invited us over for drinks. He drugged our drinks and took turns with us as we slipped in and out of consciousness.

The second time, at 17, I ended up in a bad situation with someone I didn't know very well. I worked with this person in a haunted house at a local theme park. It was finally Halloween, and a group of us were planning to attend Rocky Horror Picture Show and crash at another coworker's house for a group sleepover. After the show, we were all about to leave. He said he had to go home to get clothes, but didn't have directions and because he didn't have a phone, couldn't call anyone. I (stupidly) offered to go with him and use my cellphone to get directions from our friend.

We drove for what felt like hours and ended up at his parents' house, who "couldn't" know I was there. He snuck me upstairs to his room. While I was waiting for him to get his clothes together, he asked me why we weren't having sex yet. I said because I didn't want to. He refused to take me to the coworker's house, and kept pressuring me to have sex with him. My phone died. Trapped, alone, and scared, I didn't know what else to do.

The friend whose home I was supposed to go to told our boss, who was also my high school theater teacher, that I "blew her off to hook up" with the guy. He asked me into his office to shame me. I cried but I didn't tell him the truth. He had already made up his mind about what happened. He never cast me for a part again.

The third time, I was a high school senior. I went to my friend's house to watch a movie. I fell asleep on the couch in his room with my legs in his lap. I woke up to him licking all over my body, having removed my clothes from the waist down. I pretended to still be asleep, paralyzed with shock and fear. When he was finished, he went outside to smoke a cigarette. I ran to the bathroom, cried, cleaned myself up and left. We never spoke again.

I only ever told my parents about the third time. He had been my close friend, so surely they would notice that we stopped spending time together so abruptly. They offered to take me to the police, but I declined. These are just my own experiences -- a upper-middle class, white, suburban teenager. My extraordinary privilege did not shield me from sexual violence. I know many women who have suffered through similar trauma. Many of them never came forward, often in fear that no one would believe them.

When I hear the word "rape," especially when it is used out of context, it makes me extremely uncomfortable. Often, it can be a trigger, causing fragments of my assaults to come flooding back. The stale cigarette breath, the smeared Halloween makeup, or the sickly sweet White Russians will become so visceral, I am transported back. It can make me feel unsafe -- either physically or emotionally -- in the company of the people who've said it. It is painful; it makes me feel ashamed, used, and violated all over again.

Now, when I read stories about women who try to report their rape and get laughed at and forced to clean up the blood dripping from them because of said rape, I seethe with rage. It boils up from my gut and my face gets hot. I want to scream out for these women, for myself, and for everyone who has had to go through the experience of being violated.

To feel solidarity, compassion, and rage for these fellow survivors so strongly and then hear the word "rape" thrown around in a casual, joking, or completely unrelated manner is just something I can no longer reconcile. It is not okay. Rape is not something you get to laugh about. Rape is not something that can describe any other thing but sexual violence. To continue to do so is to dishonor these women (and men) who have already had so much taken away from them. Their agency. Their innocence. Their natural sexual desire.

Many people who say things like this don't have bad intentions. I'm not here to shame these people and make them feel bad. I'm here to educate them. Misuse of this word comes from either ignorance or cruelty. Most people who use the word out of context are not cruel. I think ignorance is completely surmountable. So let's move forward. Let's elevate our language. Let's stop minimizing the suffering of so many people.

Rape is rape, period. The act itself makes it enough of a dirty word. In the battle to end sexual assault, we need to recognize our own complacence with rape culture, and work diligently to change it. Language is a small step, but a profound one.

Be an ally to rape survivors.