A group of friends checking their smartphones while hanging out. Almost everyone on the subway with their eyes fixed on their gadget's screens. A couple laying together in bed with their iPhones in their hands. People with their devices up in the air taking pictures of a concert. And I could go on. Technology, and especially smartphones, is ruining society, making us disconnected from others, interacting with our devices instead of with each other. 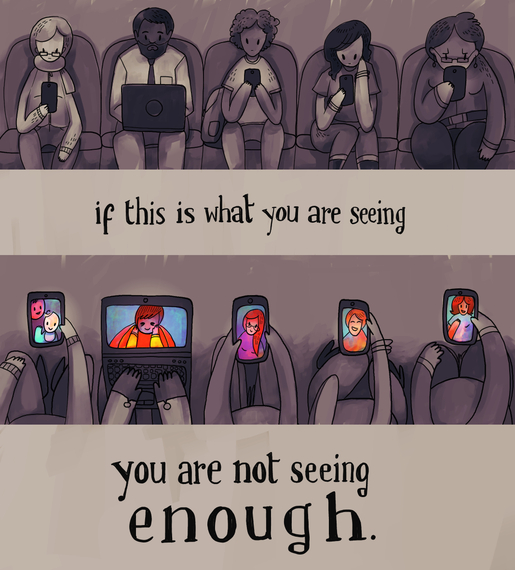 People like to criticize current society. Not necessarily the current society relative to us, but the contemporary society of the time they live in. It's just so cool to romanticize the past even if it makes us feel bad about the present. Past times were always better. And in this age of information and technology, in which the smartphone is so ubiquitous, it's only obvious to blame them for some of society's problems.

Of course, it's perfectly reasonable to stop and reflect on the use we give to technology and to criticize the bad behaviors associated. But I believe that accusing technology (and, again, especially smartphones) of ruining social interaction and even all kinds of experiences is, to say the least, quite wrong and misguided. Some people would even qualify that as pretentious, but I'll refrain from that.

If you have used the Internet in the last years (and I suspect you have), you have probably seen a picture on your Facebook feed or on your Tumblr dashboard or nearly everywhere pointing out, with a sense of superiority, how people are slaves of technology nowadays, always using their electronic devices in public. I'm talking about illustrations like these. Or comics like these. Or short films like these. Or articles like these or these. Or photographic projects like these. Again, I could go on.

The world wide web is filled with all kinds of expressive works related to this issue, probably because it's something people care about. But I feel that most of that content treats it using the same premise: Smartphones are ruining our lives (at least to some extent). 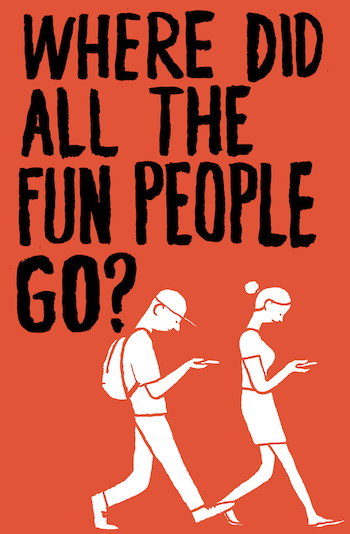 Illustration by Jean Jullien. The fun people didn't go away -- they're here and everywhere.

Every time I see content like that, I feel the need to express my profound disagreement, for which I usually resort to Twitter, always ending up wanting to say more than I could, so I decided to write this piece. Of course, this expresses my views (and, I hope, the views of many others) just like those authors whose works I'm commenting on, so you may disagree with me and find that they are right and I'm not.

My main premise is that I don't think smartphones are isolating us, destroying our social lives or ruining interactions.

I see smartphones as instruments for communication.

Is it so bad to prefer talking with a long-distance partner using a smartphone than with someone who does not interest me but happens to be next to me?

To prefer reading how the people you've followed by years on Twitter are doing instead of making smalltalk with that friend of a friend sitting across the subway car? Maybe you think that yes, it is bad, that people should always prioritize physical interaction to digital one.

I disagree. Except for obvious occasions (a work meeting, an actual conversation that is taking place between you and someone, etc.), I think people should be able to interact with whomever they please without being judged by people for using a smartphone to do so.

It all boils down to letting people connect freely using the medium they feel the most comfortable with at the moment.

Maybe that acquaintance of yours hasn't gone talk to you because she has had a bad day and just wants to relax checking her Instagram feed or listening to some music. Maybe your friend has taken his smartphone out of his pocket because he has gotten a message that he needs to reply now. Or maybe it's just that he feels a bit uncomfortable and is using his phone to try and avoid the awkwardness of the moment because he has social anxiety and you should respect that.

And yes, maybe, maybe some people are using their smartphones while they objectively shouldn't without any possible excuses and they're jerks (or they just made a mistake and didn't realize taking their phone out would make someone upset), but I think it's really unfair to assume everyone or nearly everyone who uses a smartphone in public does that. 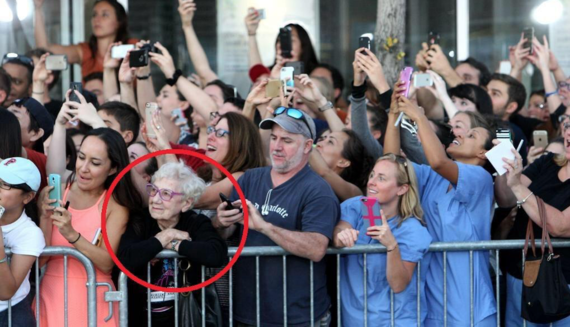 Photo by Wayne Dahlberg. It's trying to convey the idea that this woman is enjoying the experience more than the other people taking photos or recording. I'm not sure those people are really enjoying it less because of their smartphones.

Part of the commentaries I've seen criticizing this whole issue also touch on social media, since it is so integrated with our usual smartphone usage. For example, I see lots of people complaining about people who take pictures of the food they order at restaurants for posting them on Instagram or wherever.

I don't get that. Is it wrong to create a permanent memento of an otherwise temporary experience, to capture in a photo the work of the people back in the kitchen who made an effort to make the food look attractive? To me, those complains only feel as lack of understanding of how modern social media works.

I think Tumblr user zmizet expresses this very accurately in their comments on the Jean Jullien illustrations that I've used here. On that exact topic of taking photos of food, zmizet expressed the following:

I'm happy seeing my friends take photos of their food. I like taking photos of my food. Because there is a chef in the back of the kitchen who works hard to plate things beautifully and in any other situation, people dive in immediately and ruin that image. We take photos to preserve that image and who the fuck knows, if I was the chef I would be digging through instagram hoping to see my plate on there. We're celebrating someones hard work, work that is generally temporary.

And I agree with that. zmizet concludes:

Technology isn't bad. You're just upset with yourselves for having a lack of self-control. You hate that people connect through technology. And maybe, you just don't like seeing people love themselves, enjoy life, and feel joy. That's your problem, not technology's.

Social media itself is also not bad.

It doesn't make us more socially isolated. Quite the contrary, it expands our social network, as shown in this report by Pew Research Center which concludes:

It dates back to 2009, when social media wasn't as big as it is now, but I firmly believe it still stands correct today. I'd also like to point out this key paragraph:

Newer information and communication technologies provide new settings and a means of communication that independently contribute to the diversity of people's social networks.

Social media, and smartphones for that matter, only contributes to make our social experiences richer by connecting us with people in new ways. I'm sure many of you have met lots of interesting people. I sure have. Thanks to social media, I've been able to meet people that are now close friends of mine. And when I'm out, I like to open Twitter and check how they are, what they are doing, if I have something to say that may interest them. Heck, I even met my girlfriend on Twitter years ago. And I'm absolutely certain that my experience is not an isolated one, as the research above shows.

Vignette of a comic by Gavin Aung Than 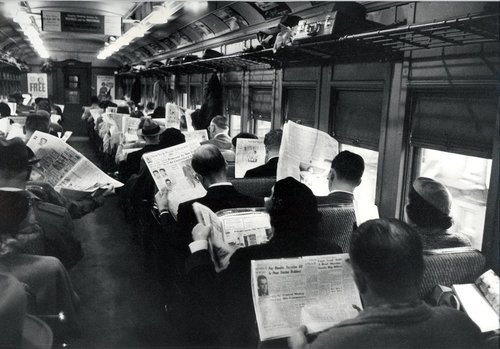 Other frequent topic appears to be one I've already mentioned. People using their smartphones on the subway, the bus or the train. This is shown in the illustration used at the beginning of this writing or in the comic I referenced above. This is probably the one I get the least. What else could people do? What would they do if smartphones didn't exist? Talking to each other?

Let's not fool ourselves. People in general do not like to interact with strangers in these contexts.

They didn't when smartphones were far from existing; they just used another object instead, like a newspaper. In response to the vignette next to this paragraph, Tumblr user bogleech commented the following:

OH MAN look at those ignorant, pathetic people of various ages, sexes and ethnic groups all doing internet shit on their phones while they ride on a subway! HOLY SHIT THEY'RE ALL DOING IT! EVEN THE GUY IN THE TURBAN FROM WHATEVER THE HELL VAGUE COUNTRY HE'S SUPPOSED TO BE FROM THAT HAS TURBANS!

HOW DARE THEY HAVE PERSONAL OUTLETS AND PRIVATE SPACE AND SHIT

The person who wrote that was clearly really passionate about this topic. And well, I think that, although violently, they deliver the message I'm trying to convey here.

They also went on to say:

IT'S ALSO A MIRACULOUS FIRST-WORLD PRIVILEGE THAT ALLOWS YOU TO MAKE FRIENDS, SHARE YOUR IDEAS, LEARN NEW THINGS, HEAL EMOTIONAL WOUNDS THROUGH SOCIAL INTERACTION, FIND ESCAPE FROM ABUSIVE SITUATIONS, FIND NEW LIVING SITUATIONS, APPLY FOR JOBS, CREATE YOUR OWN PERSONAL OUTLETS AND GENERALLY PURSUE HAPPINESS AT THE TOUCH OF A DAMN BUTTON

You don't have to take their word for it. There are studies that back up all of that like this one or this one. 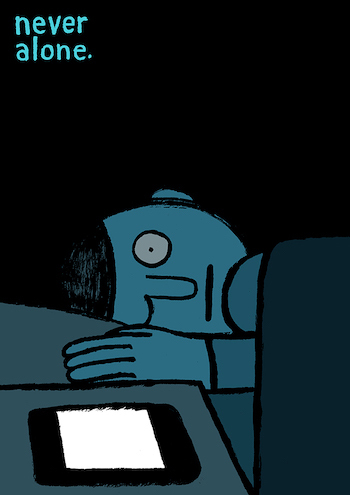 Illustration by Jean Jullien. Is it so bad to have the ability to not be alone using our phones?

In conclusion, I think we need to stop thinking technology is ruining everything, making us a slave to it, mindlessly using our smartphones all the time. It is not. It is enriching our lives, connecting us to the people that matter the most to us regardless of how far away they are, connecting us to all kinds of people whom we wouldn't have met otherwise. So, stop feeling superior for making fun of other people because they're using their smartphones, stop pretending our lives and society would be better without them, stop blaming technology for natural human behaviors.

If you see an image like the ones I referenced here, the ones trying to show how we are "letting technology ruin social interactions and pleasant experiences," stop and reflect on why people are actually using their electronic devices. Furthermore, stop romanticizing the past, believing life was better without all of this ubiquitous technology like in some form of "neo-ludism."

It enables us to connect in amazing ways as humans. It is not replacing real interaction. It is augmenting it. Embrace it.

All of the rights of the images used in this article belong not to me but to their original authors, referenced and linked below each image. Top photo by Jean Jullien.