Are you driving yourself crazy with dumb mistakes, "what was I thinking?" comments, and other lunkheaded moves? Martha Beck offers a no-fail strategy to get you back on the right track. 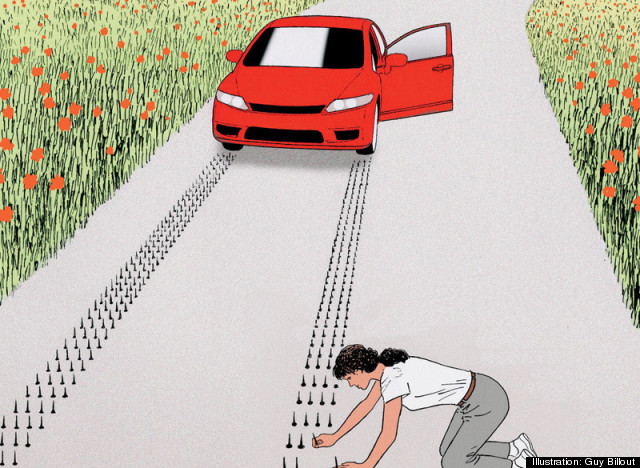 "It's not like I'm shooting myself in the foot," said Whitney. "It's more like I'm using my entire body for target practice. With guns in both hands."

Whitney's problems began when economic chaos hit the advertising company where she was an editor. As Whitney cut redundant prose from ad copy, her company cut redundant workers all around her. Whitney herself had always been a perfectionist who loved her work, but after the downsizing, her performance nose-dived. She began to forget meetings, sleep past her alarm, accidentally forward highly personal e-mails to her boss. On the day she absentmindedly shredded a presentation she was about to deliver, Whitney came to see me.

"Do I have early-onset Alzheimer's?" she asked desperately. "Maybe ADD? A brain tumor? It's got to be something medical."

Meanwhile, another client of mine -- I'll call her Olga -- was going through something similar in her relationship with her husband. "Jack is my life," she told me. "I couldn't go on without him." Yet Olga made as many stupid mistakes at home as Whitney did at work. "I forget I've promised to pick him up after work," she told me. "When he says he needs space, I follow him around begging him to talk, and when he wants to be close, I shut down. What's wrong with me?"

Maybe you've had an experience akin to these, a truck-with-no-brakes run of errors and foul-ups that wreak destruction in your life despite frantic efforts to regain control. In the midst of such madness, it can help immensely to know that there's a name for your pain. You may be using something psychologists call a counterphobic mechanism, a tendency to slide toward, not away from, something you fear. Those of us who use plain English might call it self-sabotage -- and it can ruin your life. As counterintuitive as it might seem, these subconscious reflexes can be helpful. In these officially Troubled Times, it behooves us all to be aware of them and use them consciously and skillfully.

"One of my theories," says the evil Count in William Goldman's classic story The Princess Bride, "is that pain involves anticipation." He then leaves the captive hero, Westley, chained next to the Machine, a torture device the Count has promised to use on Westley later. An albino dungeon-keeper offers Westley a way out. "You deserve better than what's coming," he says in a moment of compassion. "Please let me kill you. You'll thank me, I swear." Only Westley's superhuman fortitude keeps him from accepting.

The Count's theory about anticipation is right on the money. And self-sabotage is the mind's way of accepting the albino's offer. Like Whitney or Olga, we may screw up in precisely the places we want most to succeed, not realizing that we're subconsciously trying to force a resolution, to stop the anxious feeling that's hanging over our heads, to lose the job rather than continue to worry about a pink slip. To resolve the situation, we must first recognize that we're using counterphobic mechanisms. And that means punching through denial.

When I suggested to Whitney that she might be courting job loss precisely because it was her worst fear, she laughed.

"Fear? Me? No, absolutely not," she said. "I mean, I'm sorry so many people are getting laid off, but my job is safe as houses."

This struck me as an odd choice of idiom in an era when demented mortgage practices have triggered worldwide economic catastrophe. I also noticed a crimson blush creeping up Whitney's neck. Paging Dr. Freud: Dr. Freud to the floor, please.

"What if you keep shredding presentations and sending your boss e-mails about yeast infections?" I said. "What if these screwups keep getting worse?"

The blush faded abruptly; now Whitney looked pale. "Honestly, I don't see how that's possible," she muttered. "Um, could you excuse me for a second?" She pulled out her BlackBerry and peered at it anxiously.

"You seem nervous," I commented, watching her thumbs go to work.

"So," I said, "suppose your company folds. What would you do?"

"I'm not saying it will; I'm just asking you to imagine it."

"Seriously, what will you do if you lose your job?"

"I've worked my whole adult life for this job!" Whitney cried. "And it's not like I can get another one these days. Have you seen the news? Every day it's worse -- more unemployment, more foreclosures. People just like me are living in tents! My stocks are practically worthless." Whitney began trembling. "I can't lose my job," she whispered. "It'd be the end of the world."

So that cat was out of the bag. Like so many people right now, Whitney was stuck contemplating the Machine of unemployment. But she'd shoved this intense fear out of her conscious awareness, so her subconscious mind had built a counterphobic mechanism to kill the job and end the agony. "You'll thank me," her inner albino was saying. "I swear."

Denial Strategy #2: "But That's The Last Thing I'd Want."

For Olga, the problem wasn't that she was unaware of her biggest fear. Quite the contrary. She couldn't answer a telemarketer's call without blurting out her dread of losing Jack. She discussed it endlessly with Jack himself.

"I won't let him talk about anything negative -- negative feelings, bad experiences in the past, even movies he doesn't like," she said. "I love him so much; I can't let negative energy into our relationship."

Of course, this bizarre practice ensured that Olga's marriage was focused entirely on negative energy (our lives tend to revolve around the things we're trying not to do). It also meant Jack had no way of processing the countless indignities Olga kept inflicting on him.

"You do understand you're making Jack's life completely impossible?" I said, with my patented anti-tact.

"I know!" Olga said, sobbing. "It's another thing I've done to drive him away, but I can't live without him!"

"If you don't think about it, you're going to have to live through it," I said. "So start thinking."

"Well," she sniffed, "I'd have to learn to live for myself, I guess. I'd have to be independent, to be..." Her voice trailed off, and her mascara-smeared eyes opened wide. "I'd be free," she said.

Whoa, Nelly! The fear she'd been hiding was an even bigger surprise to Olga than Whitney's was to her. Olga's real fear wasn't that Jack wanted to leave her. It was that she wanted to leave Jack.

You may find my treatment of Whitney and Olga rather brutal, but I am not the evil Count. When you're chained to a Machine, though, waiting for God knows what, you have only two options. One is to let the albino dungeon-keeper of your subconscious kill the very thing you fear losing. The other is what brave Westley chose: Face and embrace your fear.

If you're repeatedly making dreadful mistakes and finding yourself in embarrassing snafus in an important area of life, push yourself to contemplate your worst-case scenario. I suggest doing this in the company of friends, family members, therapists, coaches, or all of the above. While you're gaping and reeling like a stunned mullet, your more objective advisers can help you do some contingency planning. That is what I did with Whitney.

"I know losing your job sounds like the end of the world," I told her. "But it wouldn't be. I know people who've started Internet-based companies for freelance work. They're making more money now than before they were laid off."

"Really?" Whitney blinked. Her grip on the BlackBerry loosened.

"And you'd finally have time to write your own book -- haven't you always wanted that?"

"You'd figure it out," I said, hoping like hell I was right.

"You know, I would," said Whitney. She didn't sound totally convinced, not by any means. But she did sound a tiny bit hopeful. Her fear of the Machine was already waning -- and that, I knew, would end her unconsciously driven train wrecks at the office. The more we examined ways Whitney could survive being unemployed, the less likely she was to cause that very fate.

Once Olga copped to her real fears, facing and embracing her worst-case scenario was even more liberating. She had felt stifled in her relationship, she realized. Her definition of "perfect wife" had meant someone who relinquished all personal interests except her husband. Although Olga loved Jack, that image of wifehood (hers, not his) was so noxious that subconsciously she knew she couldn't sustain it. Some part of her worried that it would eventually implode. So she'd begun doing things to end the marriage -- and thus her terrible anticipation of its end.

As we discussed what Olga might do if she were single, she began redefining herself as an individual, not an appendage. With Jack's help, she bagged her old stereotype of married life and realized she was free to plot her own course. Embracing her worst-case scenario took the kill me now sign off her relationship, and her marriage-torpedoing behaviors stopped.

Since you, like Whitney and Olga, are probably of sound mind, any chronic blundering on your part is likely a counterphobic mechanism: a brave, unconscious, totally knob-brained attempt to end the torture of anticipating further torture. These days, more than ever, facing and embracing your worst-case scenarios, seeing them as problems to be solved rather than torments to suffer helplessly, can save you no end of self-sabotage.

Ironically, of course, this, too, is a counterphobic mechanism. The difference is that it's conscious, reasoned, and wise, rather than unconscious, irrational, and nuts. It may not be fun to contemplate everything that could go wrong in your life, especially in a time of massive economic upheaval and uncertainty. But by going straight into the fear, you can save yourself a crazy go-round with unconscious self-sabotage. You deserve better than that. You'll thank me. I swear.

Martha Beck is the author of Finding Your Own North Star: Claiming the Life You Were Meant to Live.