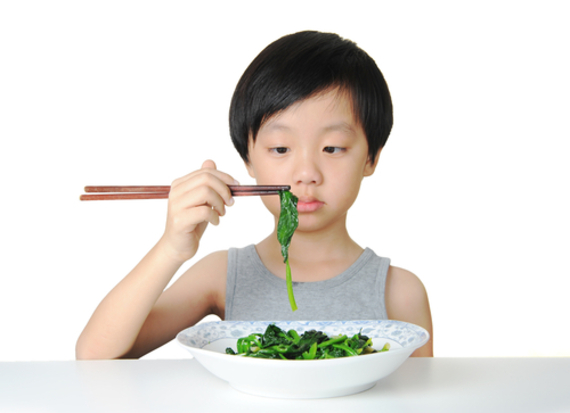 Guys, stop trying to sneak those vegetables into your kids' dinners. Yeah, we see you. We know you've found all sorts of clever ways to sneak spinach, asparagus, and rutabaga into their chicken nuggets. But we're telling you, it's not as brilliant as you think. This may sound blasphemous, but we'd rather you serve the real deal and have your kids only take one bite than hide two servings of vegetables in a single brownie. Hear us out.

We are deceiving our kids on two levels by hiding vegetables in other more desirable foods. First, the goal of preparing foods with our kids, is for them to naturally develop a healthy taste for good, real food. By hiding spinach or carrots into brownies and cookies, we never give our kids a chance to really develop this taste because they never know they are eating it in the first place! How can they love a carrot when all they are eating is a muffin with no mention of the word "carrot"? By pureeing cauliflower into an "alfredo" sauce, your kid will never know what cauliflower tastes like, or feels like, and so will never appreciate it. Second, the very act of hiding vegetables without their knowledge is deceitful and dishonest. We tend to hide things we are not proud of or things that are bad. By hiding vegetables we are basically telling our kids that these things are so bad that we have to conceal them. Is this really what we want?

While sneaking veggies into meals might feel really satisfying for you, as you think you're helping your kids increase their nutrient intake, you are not helping them in the long run. Let's take the example of incorporating spinach or black beans into brownies. We take real issue with this. "Hi Kids, you won't eat the black beans in your burrito so I hid them in a sugar and fat laden dessert. You don't want your dinner? Have a brownie instead!" Nailed it! How ridiculous does that sound? You just rewarded your kid for not eating their dinner with dessert. Also, in our eyes, you just ruined a perfectly good brownie - if you're gonna have the brownie, then have the brownie but don't wreck it by adding black beans!

There are plenty of resources out there that will help you deceive your kid into eating more vegetables; many of them are best-selling books which will teach you how to "stealthily pack veggies in so kids don't even know!" But these are short term solutions and according to an article by The Atlantic, hiding vegetables ultimately makes no difference at all. The study provides evidence against hiding vegetables into things like baked goods - saying that if your kids are familiar with the vegetable already, it makes no difference whether you tell the kids that they're there or not. So why do it and then hide it?

Here at Little Global Chefs, everything we believe in, is that our kids are people who are capable of understanding real concepts and are capable of doing real things with your guidance and example. They can grate, they can chop, they can stir, they can measure. They can do A LOT. And what comes with that is a true belief that our kids can and should understand what nutrition is. How can you teach nutrition to children, if you're pretending that the vegetables in their food aren't actually there? Good eating comes with good information. Kids want to know what they're eating, and it's time to start telling them.

We know this isn't easy. We have been in your shoes too where our kids give us crazy reasons as to why they can't eat certain foods. But hiding good food behind bad is not the way to go! Masking these veggies in desserts is like the proverbial bad wolf in the dark woods telling you he knows a "shortcut" to the castle. So put the black bean brownie batter down for a minute and we'll let you in on five tips that have worked for us to get kids to eat more vegetables:


But wait, have you tried all this before? Did all our suggestions fail? Stay calm. Do NOT rush over to the blender to puree some veggies and sneak them in. This whole process is a marathon, not a sprint. Keep doing what we suggested. Keep introducing these foods and encouraging your kids to join you in the kitchen. Before you know it, they will take that first bite of a new vegetable and their eyes will light up. Naturally, they will ask you why you didn't have them try it before.

For more tips and suggestions, visit us at Little Global Chefs and follow our instagram for more ideas on how to include your kid in the kitchen and get them to start eating their vegetables without hiding them!

Thoughts? Contrarian views? We'd love to hear them. Comment below!