=I'm pleased to present the incomparable Joe Wilson, director and storyteller known for talent as well as his biting wit when it comes to social media.

I started writing ideas on cocktail napkins while working at a hotel in Boston the late '80s, never thinking what all the ideas would be.

All the good cocktail napkin ideas were compiled into a document on a computer the kept getting longer. That document eventually ended up being my first script called "Pigs Feet & Marble Skies," an evening-length solo show I performed at Mobius in Boston in 1994. I co-wrote and performed a second evening length show in 1995, which got great reviews and caught the eye of Carsey-Werner, a company that made a lot of TV, like Cosby.

I was inspired by a CBS show called Playhouse 90 that ran for four years in the late 1950's.

Playhouse 90 was an anthology series of plays that were adapted for television and many were performed live. Each episode ran 90 minutes and was a different story, with a different writer, cast and director working on each episode, similar to The Twilight Zone. Some cast members, directors and writers were involved in multiple episodes, like Rod Serling.

Vampire Mob, a series I created that had a cast of 21 actors and one giant dog was a large story for me to tell and cast availability was always going to be a challenge.

For four years I participated as a writer in The Cafe Plays, a series that has been happening monthly for over a decade at The Ruskin Group Theatre in Santa Monica. I wrote almost forty short plays that were performed twice in front of a live audience but were never seen again.

When I thought about what story I wanted to tell next, I thought about the obstacles, about what was going to stop me. Designing a show that would have a different cast and tell a different story in each episode, like Playhouse 90, seemed like a good solution. I could shoot all these short plays I've written over four years as short films and have different casts. If a cast member becomes unavailable I can easily schedule a different story and cast in the exact same location.

Because they're short films of short plays, I thought of the name PlayShorts.

Thanks to the audience, there are five episodes of PlayShorts and I will be shooting a sixth episode extremely soon.

Karen Worden and David Branin from Film Courage get me all coffee'd up, press record and ask me rant-inducing questions!

It's like a renaissance faire for marketing. Quaint in way, but undeniably outdated.

Just because I followed you doesn't mean I joined your "street team" and now you have 18 f*cking things for me to like, vote for and contribute to.

"Thanks for connecting! Here's a long list of sh*t I want you to do for me!"

I don't follow people to find them on a bunch of other platforms as directed by an automated DM that's sent within 12 seconds of me following.

It's the fastest way to say to people, "Hi, I'm completely full of sh*t."

When you spend years trying to tell stories in the entertainment industry and get rejected for years, after a while you start to think, it's you.

The audience who found me on Twitter, who have contributed their hard-earned cash to help me continue telling stories and who let me know, it wasn't me, that's been a life changer.

If that's your intention, to market, if that's what you lead with, "Hi, buy!" then you *will* fail, on not only Twitter but on all social media platforms because everyone hates marketing.

Who loves be "marketed to?" How does that make someone feel?

It makes them feel like a customer, a target, a ticket sale, a commission, a notch on someone's sales conversion-rate belt.

Giving away all of my work, which can be seen worldwide and is made possible by really cool people who have contributed to help me tell those stories, that are free to see, is a weird way to "market."

I've spent a lot of time trying to figure out why I like telling stories.

My stories help people because I have the emails that have let me know, for years, what my work does - it helps people.

I like to make people laugh, maybe think. I love to surprise people with a story. I love what stories can do and how they can become a part of someone, like the stories I've collected as an audience member and in the world.

Human beings are made of stories and having the chance to have told a few stories to a small group of people, all over the world, that wasn't achieved by marketing, that was made possible by human beings helping other human beings tell a story.

Facebook is where my relatives live and no one parks their car on the lawn.

Twitter is a noisy town center, where I sit on the porch of my tiny art house theater, where my car's parked on the lawn.

Some folks stroll by and say hi, some stop and chat a bit, a few even go inside and watch PlayShorts or Vampire Mob. We'll chat a bit longer afterwards and off they go, until we run into each other again. Sometimes I'll hear from someone the next day who watched VMob and said they laughed when their boss said, "rectify."

I'm just one guy telling stories all over the world.

And by that I mean don't think every tip will work for you.

"You're doing Twitter wrong" was something I was once told.

The use of profanity on Twitter was also something I was warned about more than once by many very well-intentioned, smart people.

Parts of Twitter, maybe the part you live in, maybe no one swears there, but in my part of Twitter, there's a f*ckton of swearing. It's a big world.

If you're raising money to fight illiteracy, dropping an F-Bomb in that tweet, probably a bad idea.

I tell stories, the stories have swearing, I was a stand up comedian for a long time, I swear. Sorry.

Figure out the neighborhood, see what the customs are, observe long before participating. Once you've got it figured out, help, add value to conversation. Bitching about your day does nothing to make your day better and it makes everyone reading your feed's day less good.

Make it *your* neighborhood once you've got some of the customs figured out and then, maybe, if it works for you, f*ck the customs.

In 1994, after the opening performance of my solo show at Mobius in Boston, I was greeted by nine audience members who all introduced themselves by their screen names.

We were all on a BBS (Bulletin Board System), which was a computer that was in someone's house and we all dialed into it, like a mini Facebook, but with no images or video or grumpy cats. They all knew about the show from the BBS but no one said they were coming. The "real" internet diverted us from the BBS that same year and we lost touch.

All these people I couldn't know without a computer were standing in front of me after having first met me while I was performing, in 1994. That's not a typo, 20 years ago.

Because it would be a long distance call to dial into a BBS far away, there was an inherent geography element to this tiny online community and that's what allowed for them to all be in one place.

There have been thousands of cool things that have happened as a result of being on the internet for a couple decades, which is the key - put in the time and think in years, not months, not quarters, years.

I think it would be best to answer this question in the form of advice:

People lie, sometimes they have great intentions and they really mean it, for that moment, then they get distracted by binging on Netflix.

Don't think that if you help anyone, that person you helped OWES you anything. If your generosity comes with conditions, it's not generosity, it's work-for-hire and you set both the rate and the task. You're not helping, you're buying favors and that, truly, can't work for long.

Sometimes just breathing and letting something go is the best way to deal with it. An electronic slugfest, private or public, rarely solves anything. It's a big world and there's lots of jackasses. It's not your job to conduct an online jackass intervention thinking you're making anything better, you're just yelling.

I have won and lost many online arguments. I can't remember what most of them were about, none of it ever mattered in the big picture.

I was just wasting my life telling myself a story that winning a flamewar, that having the wittiest, badass putdown, counterpoint was going to make everyone's day better because another jackass had been conquered for their jackassery.

I was wrong. Really, really wrong.

After making two seasons of Vampire Mob with Marcia Wallace, who passed away last year, it didn't appear that the story would continue.

But, with the help of the audience, Vampire Mob is being adapted into a graphic novel as way to keep Marcia's character "alive."

It's been a really fun process and I'm working with great people to make it happen including Artist, JM Ringuet and Letterer, Deron Bennett and Creative Consultant Corey Blake.

You can see some of the Vampire Mob graphic novel by Artist, JM Ringuet here and on IndieGoGo 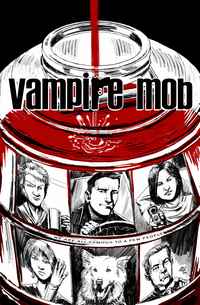 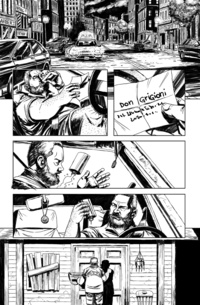