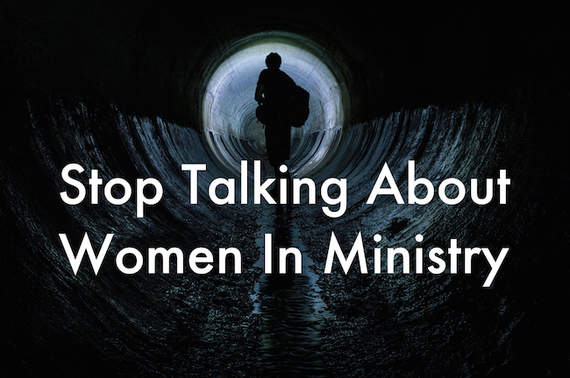 We need to stop talking about women in ministry.

Because every time we, men, talk about women in ministry we, perhaps inadvertently, place ourselves in the center of the conversation.

It's not that the church shouldn't be talking about how our theologies and policies are affecting the gifted women in our midst -- we must talk about it! It's just that we, men, should be clearing out the center of that conversation. We should be clearing it out, to be sure, for the gifted women in question. But I want to take this a step further.

We should be clearing out the center of this conversation for the Holy Spirit.

That's what Peter did, isn't it, when he went to the Jerusalem counsel and reported regarding the Gentiles, "And God, who knows the human heart, testified to them by giving them the Holy Spirit, just as he did to us; and in cleansing their hearts by faith he has made no distinction between them and us. Now therefore why are you putting God to the test by placing on the neck of the disciples a yoke that neither our ancestors nor we have been able to bear?"

He cleared space for the Holy Spirit in the center of the conversation.

That's what Peter meant, isn't it, when a few chapters earlier, he said, "If then God gave them the same gift that he gave us when we believed in the Lord Jesus Christ, who was I that I could hinder God?"

Being a charismatic Christian helps here. Because I believe in the gifts of the Spirit, all of them, as being just as active today as when they were first poured out on all flesh, and our sons and our daughters prophesied. I believe the present reality of the Spirit's outpouring and gifting is a critical interpretive factor, adding Spiritual Experience to our accounting of Scripture, Tradition, and Reason. For the early church, even the Scriptures had to make way for the Spirit at the center -- not to mention the Tradition by which the apostles themselves might have decided on all the "matters."

Who are we to hinder God? That is really the question.

Which is to say, at the center of the church's necessary conversation ought to be the real presence and power of the Holy Spirit manifested through Spiritually gifted women.

That presence and power should occupy the center in all the spaces where the church is talking. Because the resurrected and ascended King led away a host of captives and gave gifts to his people. No, not just men. The Scriptural narrative won't allow for that.

But more importantly, the Spiritually gifted women in our communities and gatherings won't allow for it either.

And if we, men, stop talking about women in ministry and just get out of the way, we might be able to hear them prophesy.