I'm going to give you a completely mind-blowing secret.

... You sure you're ready for this? People literally lose their mind when I tell them this. They get mad, yell at me and dismiss it.

So.. are you ready for this? Are you ready to learn the truth and take your fate into your own hands?

YOUR IDEA ISN'T WORTH A DAMN THING!

It doesn't matter if it's the best idea ever. 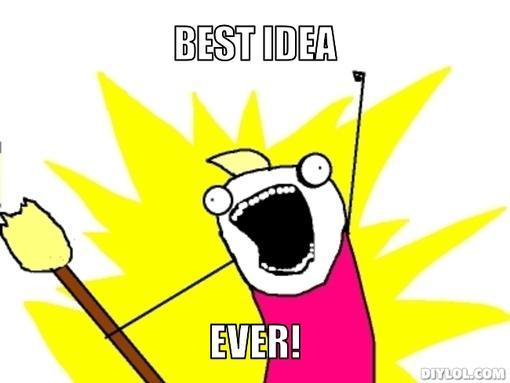 Sorry to be so blunt, but it's true. It isn't worth a thing. Nothing. Nada.

Don't believe me? Think about it...

Unless you are a mega-successful serial entrepreneur the answer is no one, ever. That is because people don't buy ideas - they buy products. "Product" has a wide definition, but it sure as hell isn't an idea.

Do you see where I'm going with this? It wasn't the IDEA of Snapchat that was valued so high, it was the product.

A product is simply the EXECUTION OF AN IDEA. Not just thinking about the app, but building it. Not just figuring out how you can make some tool better, but prototyping it and selling it. Not just coming up with a great idea for a business, but starting it. That's why your idea is worthless - it is the execution that is everything.

Execution is the sole reason why startups get funding. It has nothing to do with the connections that a founder has... that only gets a foot in the door. To get the check that you think you need, the investors need to think the idea is good, but more than that, they need to believe that you have the ability to execute.

If VC's gave money out to everyone with a good idea without giving a thought about execution, they would all be broke by lunch.

When I first realized this, my mind was blown because suddenly it was all my fault! Every single time that something cool came into my head, I would say "if only I knew more VC's / had enough enough startup capital / *some other stupid reason*, I could make millions with this idea!" Then someone would do it and I would say "damn! they beat me to it!"

Does that sound familiar? I know it does.

Ready to stop talking about your great ideas and start executing on them? Here's what to do:

If you are still reading this, you probably have at least one... If you have more than one, narrow it down to just one.

If you don't have an idea, well... get one. It doesn't have to be some grand "million dollar app idea" that will eventually take over the world. It has to be an idea that will make you more money than you put in.

Million dollar ideas are rare. But a $1,000 idea isn't, and funny enough, those are what most million dollar app empires are built on.

2. Figure out how that idea can make you money.

Apps can make money in a lot of ways. That is... if you want to make money on an app (some people don't, and I don't judge people for it.)

Figure out the whole "money thing (NSFW)" now or you can run it all into the ground when you start scaling up.

Discover the bare-minimum features that your users need to use your app. That is your MVP and the only thing that you should be striving to build. Anything else is bells and whistles, so ignore it.

Your users will love you for it.

4. Bootstrap it into existence.

Build it out using your own resources. Your own time, money, connections, whatever. This will force you to get it done right for the lowest cost and keep a laser focus on your users.

Too many people want investors to start. Do yourself a favor and stop using that as a crutch.

Investors come along when things are looking good. Not in the very beginning. (Not unless you are SERIOUSLY connected, that is.) Unless you have built million dollar apps before, don't count on investments until you have built something that people love.

For your first app, keep your fate in your own hands.

That starts the second you start valuing execution more than ideas. Only then will you take that leap of faith every once in awhile and build something instead of dreaming about what life would be like if it were built already.

I hope you enjoyed this article!

If you want to claim your stake in the billion dollar app gold rush, you should enroll in my free mini-course on building your first app. It'll walk you through the process of finding your first money making app idea - even if you aren't technical at all.