The history of broadband that you probably don't know: "The Book of Broken Promises; $400 Billion Broadband Scandal & Free the Net"

The web is abuzz with two recent filings by AT&T -- which are being done as a desperate attempt to close the AT&T-DirecTV merger.

History Is About to Slap Us in the Face

"When the FCC allowed AT&T to acquire BellSouth in one of the largest telecom deals ever, the agency enacted a series of wimpy conditions. Not only were most of the conditions simply for show, but the FCC made it very clear they really had no intention of enforcing them. AT&T was supposed to offer naked or 768kbps $10 DSL for two years after the merger, but skirted around the condition's purpose by never advertising the services, and making it difficult to order them until people really started complaining. The FCC napped.

"AT&T denied obfuscation and tried to claim that nobody really wanted dirt cheap unbundled DSL service anyway. Worse perhaps than the weak and unenforced conditions were the meaningless conditions the FCC knowingly signed off on. Designed more for showmanship than substance, several conditions made consumer advocates, an unskeptical press and inattentive politicians from both parties feel good -- but accomplished virtually nothing."

In fact, AT&T's new 'broadband carrot' to offer cheap broadband to low income families is designed to get FCC votes, it appears. A letter dated July 1, 2015, details a meeting of AT&T and FCC staff which says as much.

"During the conversation, they (AT&T and staff) discussed Commissioner Clyburn's desire to see the combined AT&T/DIRECTV offer an affordable, lower-priced, standalone broadband service to low-income consumers in AT&T's wireline footprint."

Is this a bribe?

We ask: Why didn't the FCC ask AT&T about the commitment to deliver broadband to 100 percent of their 21 state territories by the beginning of 2008, based on the previous AT&T-BellSouth merger? We filed a complaint about this as we uncovered that almost every statement in the DirecTV merger proposal claims that 25 percent of their territories still does not have broadband, contradicting their signed declarations that the work had been completed, now 7 years ago.

History Lesson. In every merger, we found that once the ink is dry, AT&T can and will most likely say anything -- regardless of what was written. And anyone who believes AT&T this round simply hasn't bothered to investigate the history of the previous mergers that created AT&T and Verizon.

Read the fine print of these current 'broadband-bribes'. There are no 'commitments'; there is no enforcement if these bribes aren't met nor any guarantee any customer will ever get the service -- or be compensated if they can't get it. But most importantly, none of these 'commitments' have any serious penalties when, not if, the company fails the American public.

This last minute July, 2015 bribe to get the AT&T-DirecTV merger through is taken directly out of the 'how to get a merger through' play-book.

The Ars Technica headline says it all:

AT&T is telling everyone:

"AT&T will make a low-income discount program available to qualifying consumers in its wireline footprint for four years beginning a reasonable time period after closing (all such discounts shall end on the fourth anniversary of the commencement date of the program);

Not only are these brain-dead speeds offensive, as the company is pushing gigabit speeds, but this offer is déjà vu...

This is an excerpt of the AT&T-BellSouth commitment to offer $10.00 DSL to new customers:

"Within six months of the Merger Closing Date, and continuing for at least 30 months from the inception of the offer, AT&T/BellSouth will offer to retail consumers in the Wireline Buildout Area, who have not previously subscribed to AT&T's or BellSouth's ADSL service, a broadband Internet access service at a speed of up to 768 Kbps at a monthly rate (exclusive of any applicable taxes and regulatory fees) of $10 per month."

This was all a smoke screen. Lots of reports came in detailing that most people couldn't get the service because they didn't know the offer existed.

DSL Reports wasn't the only one who noticed. Consumer Union's headline at the time:

Around the same time, we did a survey of San Diego California residential communications bills and found virtually no one was offered the service or knew it existed. Some had heard about it, but had to jump through hoops to get it. Our in-depth interviews included Lifeline customers who were never told there was discounted service and could have really benefited from the lower rate, or one tech savvy customer that kept going even after being told by AT&T customer service that there was no such offering.

And considering that no offering was made to the majority of people, AT&T, again, committed perjury. 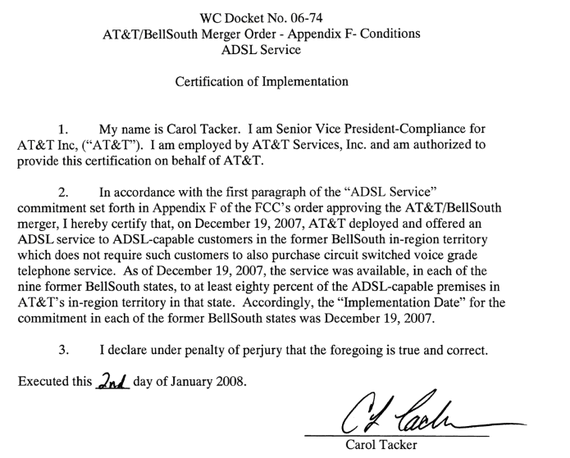 AT&T filed with the FCC to up the ante, claiming it would add coverage of up to 11.7 million Gigapower, fiber-to-the-locations if the deal is consummated. 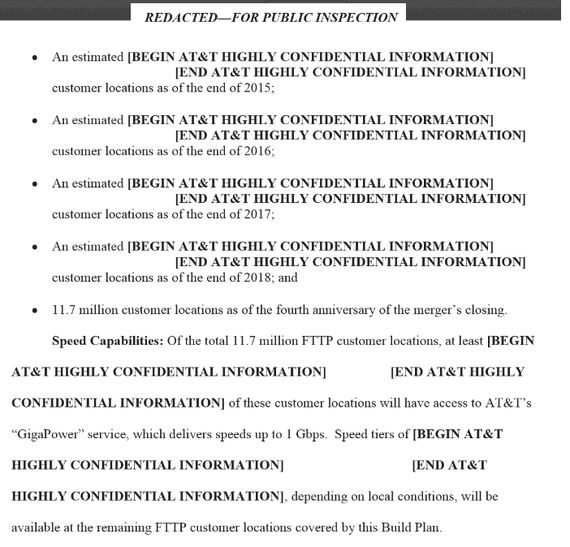 Oh. It's redacted. What did you expect?

"With approval of the transaction, AT&T will deploy FTTP so that its FTTP footprint will include a total of 11.7 million customer locations (the 'Build Plan'), wrote AT&T in an FCC filing. 'This Build Plan will be completed within four years after the merger's closing'."

AT&T has even stated there will be progress reports (to make sure that the networks aren't funded via the FCC's Connect America Fund) and there will even be an independent auditor to detail AT&T's compliance.

"Progress Reports: For four years following the date of the merger's closing, AT&T will submit to the Commission periodic progress reports on the status of its Build Plan. These reports will verify that locations built to fulfill AT&T's Build Plan were not funded with CAF.

"An independent auditor's report will be filed for each year (measured from the anniversary of the merger's closing) in which AT&T is subject to obligations under the Audited Specifications."

It sounds so official until you realize:

Stare at these Numbers

If the company has 77 million locations, than only 15 percent will even be offered this service, and only a fraction of AT&T's entire 21 state territory will be impacted -- after four years. And, most likely, this addition will not change anything as we assume that most of upgrades would be in areas where there is 'video passed' already. 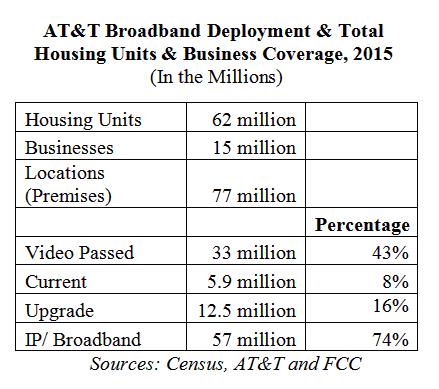 And this still leaves -- stop laughing -- 85 percent of AT&T's entire 21 state territory to still be dependent on the aging copper networks as U-Verse is a copper-to-the-home service.

But stare at the numbers long enough and you realize that at least 25 percent was never upgraded and these are the areas where AT&T plans to "shut off the copper" networks completely, as told by their own previous FCC filings and their "IP transition" trial in Carbon Hill Alabama; 60 percent of working lines will be shut off in the name of progress and these customers will be forced onto AT&T's more expensive wireless services. And note, even after the transition, about 5 percent of this rural town will still not have been 'upgraded' to broadband-- thus proving AT&T committed perjury when it told the FCC in 2008 that 100 percent of their 21 state territory had broadband and the AT&T-BellSouth merger commitments were complete.

I must note that the numbers presented by AT&T are not audited and most likely have holes the size of cities as an audit by New York City of Verizon's cable franchise coverage revealed massive gaps in deployments, even though Verizon is supposed to have completed 100 percent of the City by July 2014.

Conclusion: In the end, history will most likely keep repeating itself if this merger goes through. And two years from now someone, like me, will be asking-- But didn't they say they'd have 11.7 million locations that can get fiber optic gigabit speed services from AT&T? And what about those 'poor people'?