On January 6, North Korea claimed it carried out a successful test of its first hydrogen bomb. While the nature and details surrounding the test are still unconfirmed, the Comprehensive Test Ban Treaty Organization -- which has monitoring stations positioned around the world to detect underground seismic activity -- announced that it detected a seismic event similar to North Korea's test in 2013.

The North Korea nuclear test would be their fourth in just a few years, and regardless of whether or not it was successful, whether it was a hydrogen bomb or not, their announcement today reminded the world about its nuclear weapons.

The test comes at a time where the world has seen escalating tensions between nuclear-armed states, fueled by hostile rhetoric and expensive modernization programs.

In 2015, Russian state media "accidentally" publicized plans for a new nuclear torpedo, armed with a hydrogen bomb that, if used against a city, would cause unprecedented radioactive fallout that could last for decades. While it's not clear if these plans are real or intentionally antagonistic propaganda, Russian "nuclear-saber rattling" during the conflict in Ukraine highlights that nuclear weapons are still considered a concrete military option.

And it's not just North Korea and Russia boosting their nuclear weapons arsenals today. China, France, the United States, and the United Kingdom -- are also developing or deploying new nuclear weapon systems or have announced their intention to do so. The U.S. alone plans to invest nearly one trillion dollars over the next few decades on its nuclear arsenal modernization plan. China's strategy might entail an increase in the number of warheads it possesses. And this all comes against a backdrop of deteriorating relations between some of these countries. 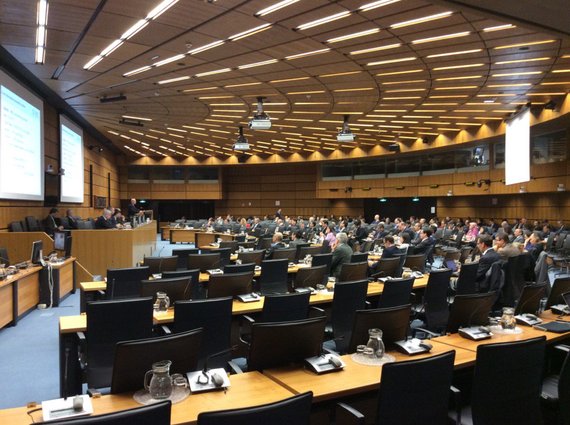 Image: The CTBTO briefs governments in Vienna about seismic detections this morning.

A return to a nuclear standoff today would be a devastating development for international peace and security. Numerous accidents, near misses and security breaches throughout the Cold War have shown us how close to a nuclear catastrophe we have been. Today the risk of a nuclear detonation is on the rise and national security experts predict an increased risk of nuclear war.

If this happened today, it wouldn't be two blocks of states challenging each other in a deadly arms race, but also the "new kids on the nuclear block" such as India, Pakistan, Israel and North Korea. Proliferation might escalate further and cause additional instability and conflict in already volatile regions.

Nuclear weapons inflict indiscriminate and inhumane harm on humans and produce disastrous environmental impacts. Any detonation -- either by intent or accident -- would cause unacceptable humanitarian consequences, and no humanitarian relief agency could provide any meaningful assistance in the aftermath.

It is therefore urgent that states that are concerned about humanitarian law and humanitarian values act upon these beliefs and prohibit the most destructive and inhume weapon of them all. This must be done before a new arms race throws the world into duck and cover exercises all over again.

We have banned biological and chemical weapons, landmines and cluster munitions because of their inhumane impacts, but the biggest bomb of them all is yet not prohibited.

Next month, new nuclear weapon talks will start in Geneva, Switzerland to develop legal measures against nuclear weapons. 121 states have endorsed the "Humanitarian Pledge", which recognize that no explicit prohibition of nuclear weapons exists and commits to fill such legal gap.

The international community must use these talks in Geneva to develop a new legally binding instrument that prohibits nuclear weapons.

We cannot allow the world to slide into a new Cold War. We might not be so lucky this time.