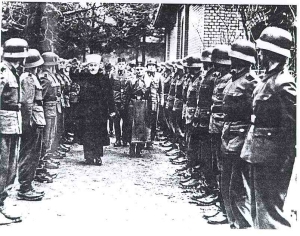 Meet The Old Dross - Same As The New Dross...

This blog was filed on January 3rd 1944. There may have been a slight delay with the post appearing due to server problems...

Fury continues to mount worldwide about the senseless loss of civilian life in Germany caused by England's callous bombing of German cities including Berlin, Hamburg and Dresden.

As of today many innocent German women and children have died in these utterly brutal bombing missions. And now there are ground offensives starting on mainland Europe.

The English have claimed that they are merely retaliating against the V-1 flying bombs being launched indiscriminately by Nazis at their civilian population in London, Manchester, Liverpool, Birmingham, Coventry and other cities. The English point out that their enemy is sworn to its utter destruction and has used the missiles and flying bombs against its civilians without any regard to English loss of life. Moreover it makes the case that their own bombing missions are specifically directed to military targets that the German army has intentionally planted in the heart of civilian populations to try and deter English counter-attacks.

These points may of course be true - but they are utterly besides the point.

Since many more Germans are dying than English - the English should either tone down the success and accuracy of their bombing - or allow the Germans to catch up on the death count.

To be honest - if more English women and children were dying - we wouldn't feel quite so bad about the number of Germans dying. But it's just so UNFAIR that more Germans are dying...

Perhaps some English people could arrange to kill themselves to match the number of Germans dying as a result of the English retaliation bombing? It would be so considerate - and it might help England's critics feel less miserable about the number of Nazis dying. Something that is causing them so much concern.

It would also put paid to that wretched proportionality argument.

Alternatively, perhaps the English could arrange to be less effective in their bombing? Or only bomb military targets that are nowhere near civilians - even though the vast majority of the V-1 rockets are intentionally being launched from the heart of civilian population centers.

Now the English will argue that the Germans have INTENTIONALLY positioned all their launch pads for the V-1 rockets in the middle of civilian populations to inhibit the English from bombing those launch sites. Well - tough noogies to the Brits! Sorry - but if the Germans are smarter or more skillful at cynically using their civilians as human shields than you - tough luck!

You can't have it both ways. If you truly wish to save your nation from being annihilated by Nazi missiles you'd better stop looking to win a popularity contest. The Nazis are waging this war to win and to utterly destroy England. If all you Brits care about is popularity - then you may as well resign yourself to speaking German...

It's about time that little nations who wish to defend themselves wised up to their responsibilities.

Otherwise the same stupid complaints will be made at some point in the 21st Century when some little nation finds itself under constant attack from rockets fired at its civilian population by a terrorizing enemy that has sworn to destroy it....

Cliffs Notes To Assist the Hard-Of-Thinking

"Nature is cruel; therefore we are also entitled to be cruel. When I send the flower of German youth into the steel hail of the next war without feeling the slightest regret over the precious German blood that is being spilled, should I not also have the right to eliminate millions of an inferior race that multiplies like vermin?" - Adolf Hitler - circa 1938

"We have suffered so much that it only steels us to fanatical resolve to hate our enemies a thousand times more and to regard them for what they are destroyers of an eternal culture and annihilators of humanity. Out of this bate a holy will is born to oppose these destroyers of our existence with all the strength that God has given us and to crush them in the end." - Adolf Hitler - 24 February 1945

"I will carry on the fight until the last traces of the Jewish-Communist European hegemony have been obliterated." Adolf Hitler - 28th November 1941 to Mohammad Amin al-Husayni (The Grand Mufti) - seen in the photo at the top of this page saluting his SS buddies in 1941. Oh the ties that bind...

"The Day of Judgement will not come about until Muslims fight the Jews (killing the Jews), when the Jew will hide behind stones and trees. The stones and trees will say O Muslims, O Abdulla, there is a Jew behind me, come and kill him." - Article 7 of the Hamas Covenant