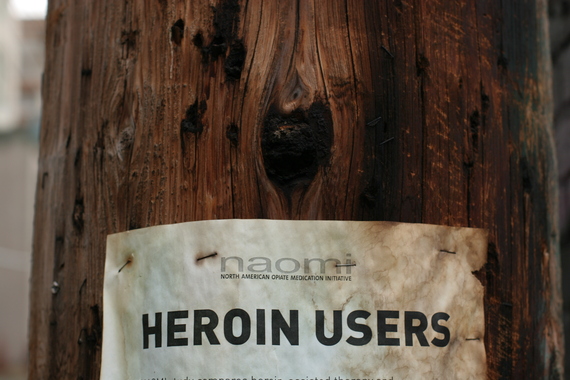 The country is in the middle of an unprecedented opioid crisis. The majority of overdose deaths - six out of 10 - involves someone taking an opioid such as heroin and pain relievers. Over the next two days, writing fellows for the Center for Community Change share their take on a crisis that is not only killing Americans at record rates, it is costing billions of dollars in health and social costs and overwhelming hospitals and police departments.

It is no secret that the opioid epidemic is ravaging communities across the United States.
In my hometown of Youngstown, Ohio, it seems like every nightly news broadcast brings stories of still more opioid overdoses and deaths. But there was a local news story this month that stopped me in my tracks.

It was a video of an 8-year-old boy being told that his mother had died of an opioid overdose. Since it was posted on October 10th, it has been viewed millions of times. That means that millions of people, around the world, have watched a child find out about his mother's death. Millions of people have witnessed an intensely personal and vulnerable moment in a child's life.

The boy's father, Brenden Bickerstaff-Clark, who appears in the video and made the decision to upload it, says that he shared it with the world so that people would know the dangers of heroin use. As his Facebook post sharing the video states, he hopes that seeing his child's grief will "maybe help save a child's parent's life".

This is not the first time that a child has been used to showcase the destruction that opioids can bring to individuals, families, and communities. Early in September, police in East Liverpool, Ohio, posted photos of a 4-year-old boy in the backseat of a car while his grandmother and her boyfriend, victims of heroin overdose, were slumped in the front of the car.

The City of East Liverpool's reasoning for publicizing the photos with the child's face visible mirrored those of Bickerstaff-Clark. In a Facebook post accompanying the photos, they stated that, "This child can't speak for himself but we are hopeful his story can convince another user to think twice about injecting this poison while having a child in their custody."

But that's exactly the problem. Why are we using children who can't speak for themselves as symbols of a national battle against heroin and opioids? In the 21st century, these pictures and videos will never go away. In addition to coping with the loss of their parents or guardians, these children will live in shadow of this internet publicity forever.

In addition, the use of children to raise awareness about heroin addiction demonstrates a fundamental misunderstanding of the opioid addiction problem in the United States, and therefore the ability of photos and videos of children to solve the problem. Even though the City of East Liverpool's post above explicitly mentions the injection of heroin, many opioid users are not heroin users, especially at first.

The major drivers of the opioid addiction epidemic are prescription opioid painkillers. Almost half of young heroin users surveyed had first used prescription opioids before switching to heroin. In 2012, the CDC reports that 13 states had more opioid prescriptions than people in their states. Ohio was one of them. In Ohio's Scioto County alone in 2010, 9.7 million doses of opioid painkillers were prescribed to only 78,000 people.

Is a video of a sobbing child who lost his mother to heroin going to keep a man with chronic lower back pain from becoming addicted to an opioid painkiller? Will it stop a patient recovering from surgery from taking an opioid more frequency than directed by her doctor? Probably not, even though these can be the first step towards becoming addicted to opioids and eventually switching over to heroin.

Make no mistake, children are often victims of the opioid epidemic. Communities like mine are in crisis, and drastic times sometimes call for drastic answers. In addition to opioid related neglect and abuse, children themselves can fall victim to opioid dependency. In Scioto county, an epicenter of the opioid epidemic, one in ten babies was born opioid dependent in 2009. This is a tragedy that these communities must grapple with.

There are no easy answers here, but it is clear to me that publicizing the faces, the grief, and the loss of children affected by opioid abuse is not the right one.

Combatting the opioid epidemic will not be easy. It will require the cooperation of doctors, public health departments, state and local government officials, medication prescribers, law enforcement, rehabilitation centers, and, of course, caring and informed citizens. What it will not require is exploiting grieving children.

Angela Pupino is a fall writing fellow for the Center for Community Change.