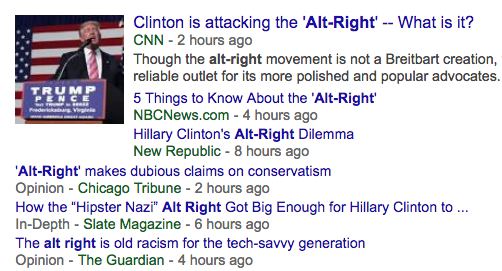 Ten years ago I attended a conference in an upscale national chain hotel in a small town in Virginia, just outside of Dulles International Airport. Even though we were all wearing badges with our name and affiliation or place, it wasn't one of the usual academic conferences I frequent. The stands were selling books that claim to prove the intellectual superiority of the "white race", while in the whirlpool a woman and two men were discussing which town had the best Ku Klux Klan (KKK) chapter for her children. In the plenary room a broad variety of speakers were lambasting "race traitors" and entertaining their audience of a couple hundred people with more and less subtle anti-Semitic and racist "jokes."

It was the annual conference of American Renaissance, a magazine that, according to its website, "promotes a variety of white racial positions." Its leader, Jared Taylor, has long tried to mainstream racist ideology in the United States. Although Taylor would stay away from addressing "the Jewish issue" himself, and even reach out to Jewish conservatives, he had no problem to collaborate with vicious anti-Semites like David Duke, a former KKK Grand Wizard, or Don Black, founder of the main neo-Nazi internet forum Stormfront. In fact, the most surreal experience occurred when Duke referred to "people of Lithuanian descent" in his speech -- one of many not so subtle code words anti-Semites use to refer to Jews. An older man in the audience stood up, identified himself as Jewish, shouted that Duke was an anti-Semite, and stormed out of the room. How he could have set through the previous two days of antisemitism and racism without understanding the premise of the conference was beyond me.

Jared Taylor and American Renaissance are among the main representatives of what many in the media have started to call the "alt-right." The term itself was never used by Taylor, or most of the other people now linked to the term. It was allegedly coined by Richard B. Spencer, who founded the website Alternative Right in 2010. In many ways Spencer is a younger version of Taylor: well educated, in tune with modern technology, and determined to bridge the gap between conservatives and "racial realists" (i.e. closet white supremacists). He is president of a think tank with the perfectly respectable name National Policy Institute (NPI), which attends and organizes conferences, including the more mainstream Conservative Political Action Conference (CPAC).

Both Spencer and the term "alt-right" were marginal within the US Right, and unknown to the US public, until the rise of Donald Trump. And it is actually not so much Trump but the mainstream media that has made them into recognizable names. In a misguided strategy of guilt-by-association, as if Trump's own words don't speak for themselves, Duke, Spencer and Taylor have been interviewed and mainstreamed by leading media outlets, expressing their support for Trump, arguing that he says what they have been saying all along. This has rejuvenated these moribund organizations and undoubtedly strengthened their appeal and support, at least in the social media. Similarly, the term "alt-right" is now used as if it has any clear meaning.

But unlike terms like conservatism and radical right, "alt-right" has no clear definition or philosophical foundations. It is also not new. Groups like American Renaissance have been around for decades. The term "alt-right" is nothing more than a clever marketing tool by a white supremacist activist, who knows that his ideology is considered unacceptable in today's society. Hence, he came up with a term that sounds acceptable to the conservative mainstream. For years it had little to no effect until uncritical and uninformed journalists did what he never could: mainstream his term.

Tellingly, with a few notable exceptions, most of the main individuals and organizations that are described as part of the "alt-right" by the media do not self-identify as such. While they use all kind of other neologisms, like "racial realists" and "white nationalists," they are, and always have been, white supremacists! They are racists (not "racialists") who believe in the existence of races and in the superiority of the "white race." As anyone with the most basic understanding of US history knows, there is nothing new about this!