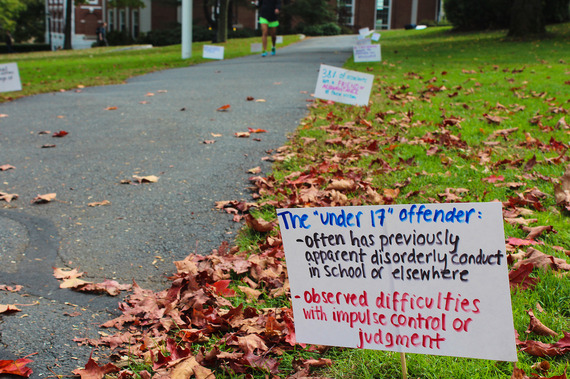 For months, college sexual assault has been an enormous focus within the media, the activist community, and was most recently announced as the reason for a task force created by President Obama. College sexual assault has gone from being seen as a private problem to getting frequent press coverage, and this is undoubtedly a good thing. Publicizing the problem calls for university accountability, and gives survivors a platform from which to speak about their experiences and recognize those experiences as part of a larger campus violence (and subsequent cover-up) problem. However, the current discussion around sexual violence has largely ignored high school perpetrators and their victims, and how those same perpetrators often go on to become the college campus sexual assaulters we hear about.

Campus assaults occur within a community bubble where both colleges and their students are protected by laws that don't apply within the larger criminal justice system. Laws such as Title IX protect students of all genders from discrimination, harassment and sexual violence. We know most campuses don't enforce Title IX -- but off-campus, protection under Title IX isn't even an option for victims who report being assaulted, for example, to their local police departments. Take Daisy Coleman, a then 14-year-old girl who was assaulted by an older teen who was never charged with rape due to what prosecutors cited as insufficient evidence. According to the U.S. Department of Justice, juvenile offenders are less likely to be arrested in sexual assaults than in aggravated assaults and simple assaults reported to law enforcement -- this is a sign to both victims and perpetrators that the system doesn't take sexual violence seriously. Arguably, if the system took violence committed by juveniles more seriously, these perpetrators would not go on to continue committing violence.

After his four-month jail sentence for child endangerment was suspended in favor of two years of probation, Daisy's attacker enrolled at the University of Central Missouri, a decision widely publicized by the online hacker group Anonymous. The University released a statement noting that it "is required to allow all qualified and eligible students to pursue an education. UCM continues to uphold the rights and responsibilities of all students and employees." The problem with this statement is that we already know this student was a perpetrator prior to college, and the University has now admitted a known sexual assault offender. Universities referring to known perpetrators as "qualified and eligible students" perpetuates the idea that sexual assault is not a serious problem. Here, also, are two missed opportunities for intervention: The legal system could have held Daisy's attacker accountable for the sexually violent crime he committed, and the University could have refused to admit him based on either the crime he pled guilty to (child endangerment) or could have chosen to entirely believe Daisy Coleman's story. Both the justice system and the university system, in this case, chose instead to tolerate sexual violence. Both relinquished opportunities to hold a sexual assault offender accountable and try to stop him from continuing his violence.

Combine these missed opportunities for intervention with findings by David Lisak, a well-known researcher on sexual assault and the perpetrators of it, whose findings state that "two thirds of [college campus] rapists were repeat offenders who averaged close to six rapes each, and the majority also engaged in other forms of interpersonal violence, ranging from battery to physical and sexual abuse of children."

These perpetrators did not suddenly begin committing violence once they got to campus. Lisak asked, rightfully, "Given the number of interpersonal crimes being committed by these men, how is it that they are escaping the criminal justice system?"

Not all of these perpetrators avoid the system entirely. According to the U.S. Department of Justice, "The number of youth coming to the attention of police for sex offenses increases sharply at age 12 and plateaus after age 14." Not all of these offenders are punished in a way that their college applications require them to disclose. In a more personal example, I was sexually assaulted my senior year of high school by a male friend. At the time, I thought I was his only victim. Later, two other friends told me they'd been sexually harassed by him for years. It soon became that anyone I told about my perpetrator had their own violent history with him. Boys were punched or spit on by him; classmates had been peed on or otherwise bullied by him; he'd molested someone when he was only 12; he'd assaulted someone else at age 14. To my knowledge, I was the only one who brought charges against him at this point, and the district attorney said we could not bring any of his prior behavior up at trial, because it's considered to unfairly prejudice a jury. Later, in my work with survivors on one college campus in particular, I learned my perpetrator had gone on to assault at least three other women on his campus. No one has ever held him accountable, and I'd refer to this as yet another missed intervention opportunity. More preventative education, at a younger age, is necessary to prevent young people from ever perpetrating or going onto college to continue perpetration.

Some programs aiming to take that opportunity already exist, such as Jackson Katz's fabulous Mentors in Violence Prevention, which has long been in place at many high schools. Programs like MVP encourage young people to intervene in sexual harassment or other violence in a way that won't put them at personal risk of harm or injury. Despite our socially accepted belief that these situations aren't ours to intervene in, any intervention is better than remaining silent in the face of harassment or abuse. Even with strong programs like MVP, schools need to do more for their students long before high school in order to prevent perpetration and to create a culture that does not tolerate sexual violence.

To address the problem, schools also need to start calling it what it is: violence. At the elementary school level, we often refer to it as bullying or inappropriate touching. At the middle and high school levels, we tell ourselves that "boys will be boys" (or that "girls will be girls") and that their behavior doesn't have painful impact. At the college level, schools have policies that often refer to sexual violence as sexual misconduct. Calling these instances anything, but what they are -- violence -- allows us to continue to avoid our responsibility to address it. No more.