My father was born in Sierra Leone and my parents married there, so I've always felt a connection to that country, but never as strongly as in recent weeks as the Ebola virus has stormed through Sierra Leone, Liberia and Guinea, ravaging communities and taking innocent lives.

A few weeks ago, as Ebola slipped down the world's list of priorities, I woke up in the middle of the night knowing I had to do something, in whatever way I could, to help fight the spread of this virus. Unchecked, Ebola threatens to not only take more lives, but to destroy the fragile economic growth that West Africa, especially Sierra Leone, has experienced post-war. So I've spent the last two weeks meeting with NGO groups working to help those affected and with the United Nations officials who are coordinating the response, learning about what is needed and what I can do to help.

It is clear from the meetings I've had that Ebola isn't just a crisis, it is a human catastrophe and one that threatens to grow stronger and spread wider if the world doesn't act now. 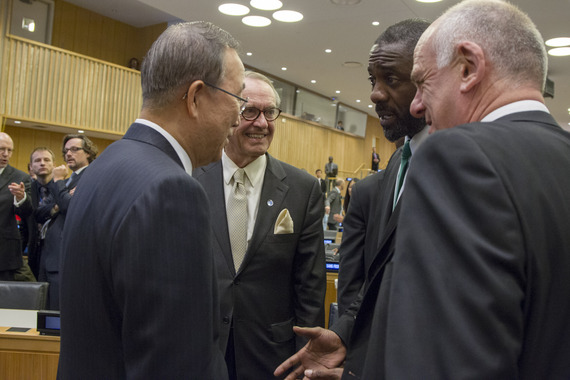 At the UN last week, I was honored to meet with Secretary General Ban Ki-moon and Dr. Samura Kamara, Foreign Minister of Sierra Leone. During the UN High Level Meeting on Ebola, I listened to President Obama and other leaders urge the world to act. The danger of the situation couldn't have been clearer. World Bank President Jim Yong Kim is talking about a "potential meltdown" if the world doesn't do a lot more and quickly.

I was genuinely heartened as country after country offered their solidarity and support, and I'm pleased that tomorrow in the UK the development minister Justine Greening is hosting a global conference to raise additional funds and equipment to contain the outbreak in Sierra Leone. But these pledges are just the start of the process. We need to make sure that the leaders' words translate into action on the ground. Proper health services and professional care can dramatically improve chances of survival from this disease, which makes quick delivery of vital materials and personnel even more essential. Until there are more health care workers to fight the disease and more tools for them to fight it with, Ebola will continue to kill large numbers of people.

The most humbling moments for me this week were hearing about the bravery of the health care workers risking their own lives to fight the virus on the front lines. Imagine having to sit down to tell your family, your parents, your wife, your child that you're going to fight Ebola. That's bravery. These workers are heroes and we owe it to them to make sure they have all the equipment they need to help them to stop the spread of the virus. We also need to redouble our efforts to develop an effective vaccine. I know that there is some progress on this front, but it cannot come fast enough.

In the face of so many world problems, crises like the Ebola outbreak can seem hopeless, or far away, but this is a disease that can be stopped. If, like me, you want to do something to help, here are three areas in which we can all have an impact:

For me the fight against Ebola is a very personal one, but I know millions of people all over the world have been moved to want to help. We cannot leave the people of Sierra Leone and West Africa to suffer alone. We owe it to them as fellow human beings to ensure our leaders deliver on their promises, support the healthcare workers, and stop this virus in its tracks.

This post is part of a special series produced by The Huffington Post in recognition of the threats posed by Ebola, particularly to West Africa. To see all the posts in the series, read here.