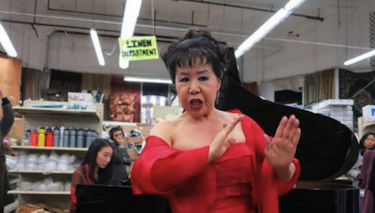 In the last hour of yesterday's Sunday stroll through the Lower East Side gallery scene, I stumbled upon a wonderful sub-theme of storefronts and the memories they contain.

Corin Hewitt's "The Third Station" architectural installation at Laurel Gitlen suggests two abandoned storefront facades transformed as funky, dirt encrusted museum-like vitrines. The show feels like a postmortem of a building, the forensic of a facade, in which the the doubling or mirroring of two back-to-back buildings slyly allude to artistic repetition and copying that undermine uniqueness. Encased behind the windows, and presented on columns of pressed dirt, are flattened boxes of HD studio make-up that remind on of fake skin and the merging cycles of life and death.

Rainer Ganahl's "El Mundo" at Kai Matsumiya is a two-projection video presentation based on a classical music concert that took place at El Mundo, a now-defunct discount store that had been functioning in the former Eagle Theater in Spanish Harlem, New York. The concert took place during the discount store's going-out-of-business sale in 2013. As I watched the videos in Ganahl's installation the gallerist noted that 50-years earlier and just a few blocks away Claus Oldenburg had made his legendary Store installation. In December 1961, Oldenburg opened The Store, stocked with items made of painted plaster and chickenwire, in a rented storefront at 107 East Second Street that served as his studio. Writer Jonathon Keats in Forbes called The Store "one of the all-time great Pop Art installations, more subversive even than Andy Warhol's breakthrough exhibition of 32 Campbell's Soup cans in 1962."

Watching Ganahl's "El Mundo," I was struck by the persistence of artists and the arts. Here I was, watching a video performance staged by a conceptual artist working with professional musicians, sponsored in part by the intrepid non-profit White Columns under the leadership of their inimitable director Matthew Higgs; and as I watched the performance Ganahl's camera panned the ceiling of the defunct Harlem store and I spotted a ceiling a fleur-de-lis and instantly realized that the nearly abandoned Harlem store had once been a show palace. And these wonderful performers were standing in a place that had once been filled with artists of previous generations. Viewing that video in a formerly abandoned storefront in the Lower East Side that was being reclaimed and adapted by artists made me think how cities often come full-circle while artists, constantly in danger of being turfed under, remain unsinkable and ready to reinvent and reinvigorate life. 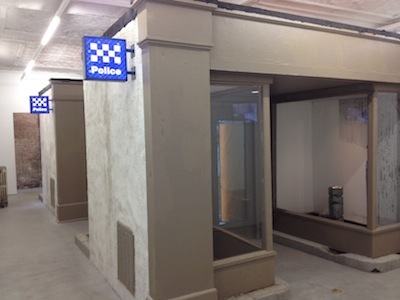 Corin Hewitt's "The Third Station"
Now through May 11