Fifty years ago this week a man stood among the masses in our nation's capital to share his dream with the world, a dream of freedom and equality for all. His timeless message was calling upon each of us to reexamine our daily treatment of each other. In 1963 Martin Luther King Jr. delivered a profound message that marks a turning point not only in the Civil Rights Movement, but also in American history. Fifty years later his energy is still felt as we return to honor the man who literally gave his life to the belief that we are all created equal. 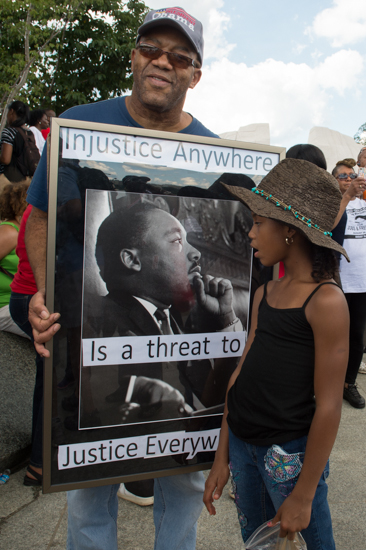 This weekend the city hosted a multitude truly representative of our nation, a gathering of people who justly embodies King's dream. A microcosm of America, people of all ages, ethnicities, religions, sexual orientation, and socio-economic status are present, standing together in the belief that differences should not divide us, but instead unite us. The worst four-letter word in the English language is T-H-E-M. THEM is used to polarize, discriminate, separate, create hate, instill fear, inhibit understanding, and perpetuate violence. Some of those who marched this weekend came out to support or protest a variety of issues ranging from gun control to abortion. But as I spoke with many in the crowd, the underlying theme I found was that everyone has experienced the marginalization that King dedicated his life to fighting against.


While almost everyone who is here in D.C. this week agrees that much has changed since that momentous day, they all are quick to add that there is still more that needs to be done before King's dream is finally realized. What follows are just some of the stories and experiences told by those who gathered for the 50th anniversary of the March on Washington. 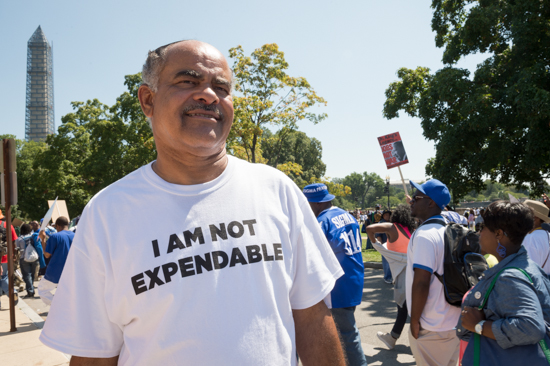 Del, New Jersey
"Close to 50 years ago I know a young man that got killed for nothing. I know another one, for nothing. Because of the color of their skin, really. And they weren't bad people either, so I don't understand why this happens. Still happens. At this time, at this day and time. But it's happening. Sure, things are a whole lot better now. We can go places and do things and get better jobs. But it's not what it should be. We know that. Fifty years ago my family left Virginia. We moved to New Jersey, 1963, a week before this march. I was 11 years old. Couldn't make it then, but I'm here now. So this is a big deal for me, very big deal." 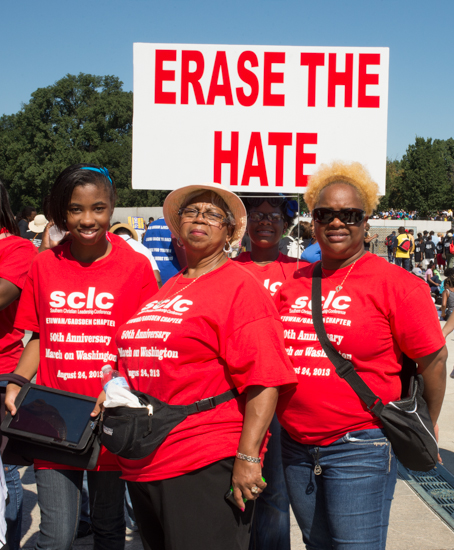 Marcia Kendrick and Bernadette Brooks, Gadsden, Alabama
"We brought our children here because we want to educate them about black history, the NAACP. We want them to know their history because since integration, they don't teach as much as they used to teach it in schools." 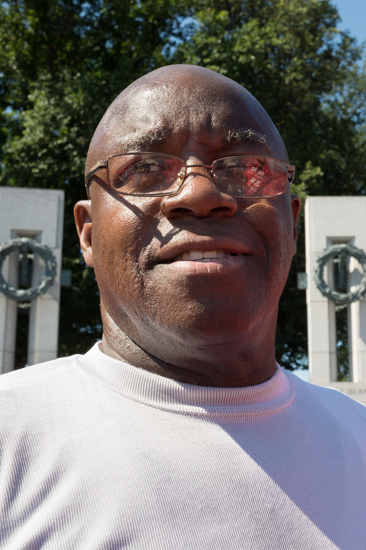 Robert Avery, Councilman, Gadsden, Alabama
"Things are the same [in Gadsden] as 50 years ago. I mean we have black elected officials, which we didn't have 50 years ago. But the attitudes are the same pretty much, haven't changed a lot. Give people an opportunity to prove themselves rather than just looking at people like based on their color. I mean, the hiring is atrocious; we don't have blacks in a lot of positions and stuff like that. And just give people an opportunity, that's all. That's all people are asking for, for an opportunity to make changes. " 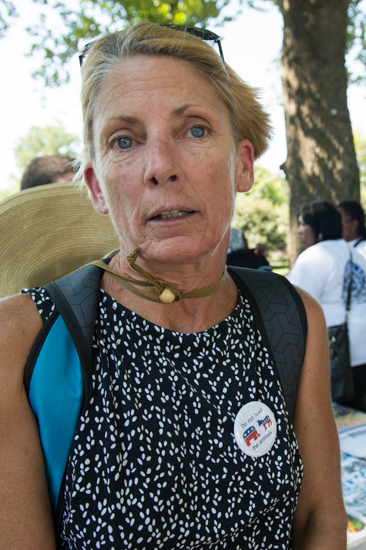 Tracy, Cape Cod, Massachusetts
"I'm very disturbed with what I've learned over the past 30 years that's coming through me now. We don't have our rights anymore. We've got tactics like stop-and-frisk, voting rights in North Carolina, bought out by the Koch brothers. You know, I could just go on and on. I'm here because I'm so over the on and on. I'm a loving, giving, kind person that's seeing tragedy happen all over the United States and it's affecting the world. We need to stand up and say this is not us. When I went to Italy I had to apologize for being an American. How crazy is that?" 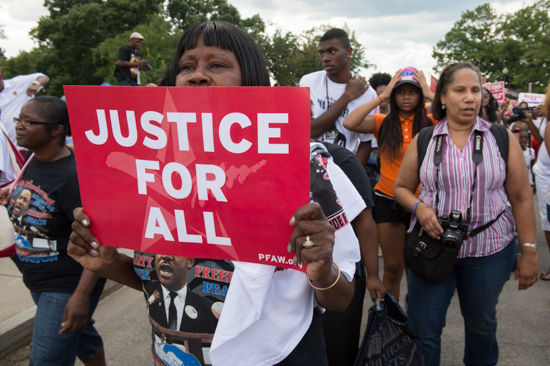 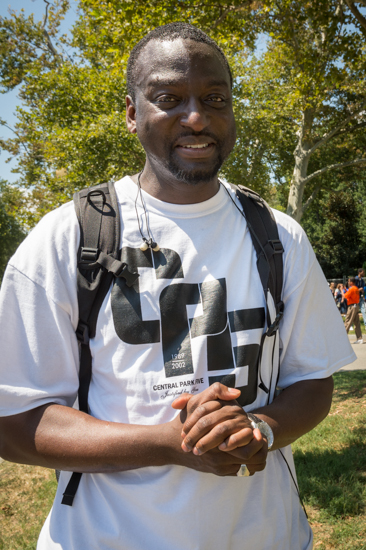 Yusef Salaam, New York
"I'm one of the guys from what became known as the Central Park Five, from the Central Park Jogger case. We got exonerated in 2002 when they found out that we didn't actually do this crime. I was 15 years old when I went in and I was actually in prison for seven years. Then there was three years of parole. And then, I was already finished with parole and they found out, 'Oh you know what, we had the wrong guys.' We are still fighting for justice. We have been fighting this system for over 10 years. And everybody knows that justice delayed is just the same as justice being denied. It happens far too often, so many cases, and the Central Park Jogger case is just a celebrated one of them. The reality of the matter is that something like the Central Park Jogger case is happening right now. Something that happened to Trayvon Martin is happening right now, that happened to Kimani Grey, Shantel Davis, the countless others. This stuff is happening right now. But once light gets shone on it, it looks like an atrocity. 'Oh my goodness, look at this isolated incident.' But this stuff happens all the time." 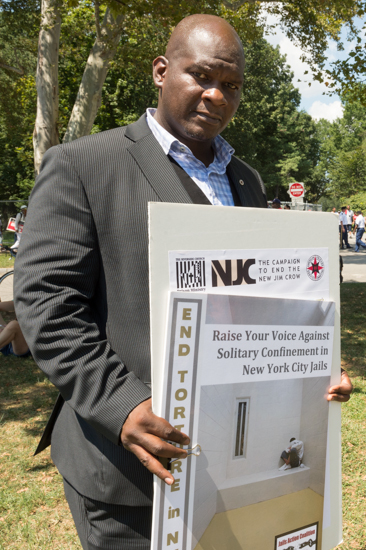 Five Mualimmak, New York
"I did 12 years in prison. Five was in solitary confinement, 39,800 hours. I came home to make a difference and fight about it. These issues that we have are not only racial but torturous, like the conditions of solitary. Twenty-three hours in the cell, 7 days a week for years on end, with no therapy. When somebody acts out, our first response should not be to torturously confine them to a cell and just hope that they'll figure it out by themselves. In New York City, four out of five charges for solitary confinement are for non-violent correctional institute rule infractions, like walking on the wrong side of the hallway, taking a pack of sugar out of the mess hall, having too many postage stamps. Like 50 stamps are allowed, I have 51 stamps, they sent me to the box. All 39,800 hours, rule infractions." 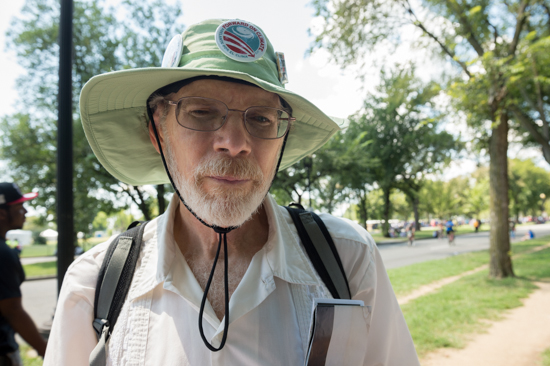 Ron, Columbia, Maryland
"Dr. King came to Stanford when I was there. He was recruiting for the Mississippi Summer Project, which I went on. Spent two months in the terrorist state of Mississippi. And back then a very big thing was voting rights. Well here it is, the spiritual descendants of the people who were denying voting rights back then are trying to do the same thing now. Yes, there's been some change. But that doesn't mean we've reached nirvana. We've still got a long ways to go. Trayvon, they're selling all these T-shirts -- they've got Dr. King and President Obama on one side and Trayvon Martin on the other. I mean that shows you we still have a long way to go. 'No more Trayvon Martins'. They ought to have a sign up: 'No More George Zimmermans'." 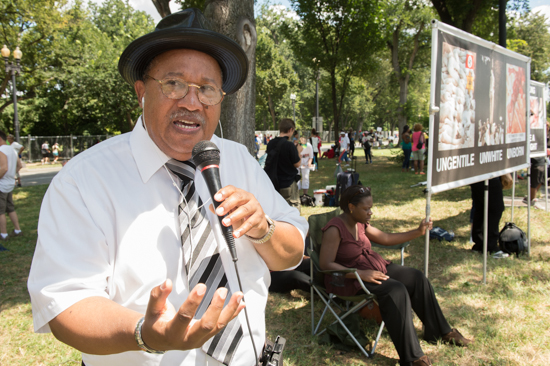 Dr. Johnny Hunter, L.E.A.R.N., Inc., Fayetteville, North Carolina
"In days of old when we marched, I remember saying, 'We do this not for ourselves, but for our fellow brothers and sisters yet to be born. Because they have their rights.' Equal job opportunity is nothing for a dead black child. Voting rights, they mean nothing if they can kill the child before the child is even out of the mother's womb. Even a good education means nothing to a dead black child. I am here to tell you it starts in the womb. If we value the child, everybody else will have to value our children, too. Every child born is a precious child and maybe somebody will say 'Yeah but what if they're poor?' I don't care if they're poor. Poor kids have a right to live. We can't be turning our back on the poor and we can't be killing off the poor. The genocide must come to an end. We've got to make it right. And the only way to make it right is to make sure that every child has their moment in the sun. " 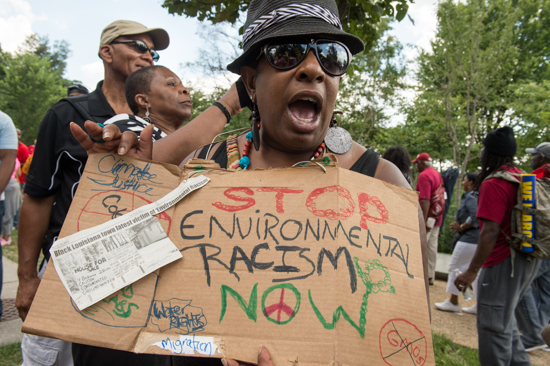 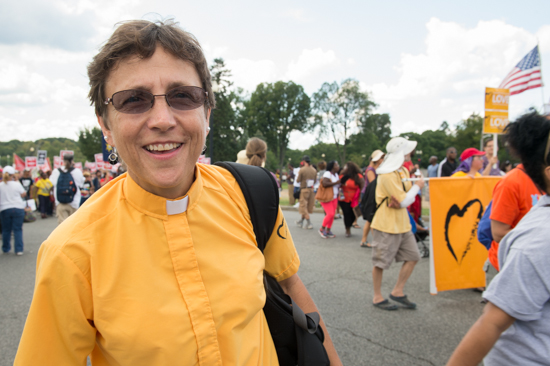 Rev. Kathryn Schmitz, Orlando, Florida
"Standing On The Side of Love" is a program which was created by the Unitarian Universalists Association, but it's meant to be inclusive enough that others can join us. And it's really meant to harness the power of love and to stop oppression and bullying. So whenever we see situations that are unjust and unfair, it's our call to step out into the community and be a voice for love rather than hate and discrimination and division. And so it's a national campaign that's been going on for a few years now. It started back during the equal marriage struggle. The president of our association at that time was asked, 'What side do you stand on?' And he said, 'We stand on the side of love.' And that just really caught on and so we use that to stand on the side of compassion, and comprehensive immigration reform, against racism, anytime any situation really where you see people being excluded from the fullness of the American dream and the promise of America." 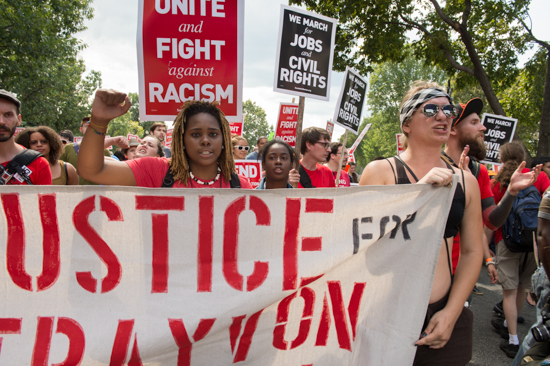 "Education is a right, not just for the rich and white. " 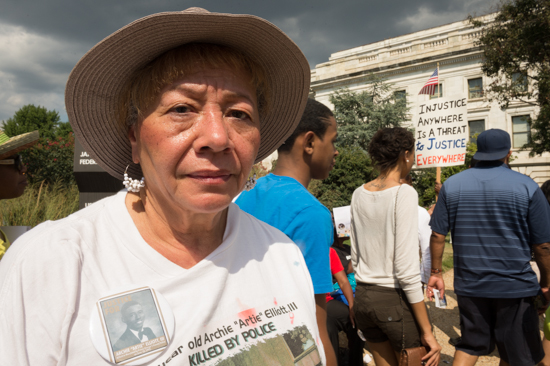 Dorothy Elliot, Maryland
"My 24-year-old son, Artie, he was almost home when he was stopped by one police officer. He did what the officers asked him to do, but he was acutely intoxicated. He had driven from Virginia on his construction job and stopped along the way to take a Happy Hour, like a lot of people do. And he complied with the officers, had been searched; nothing was found on him. They eventually put him in the police cruiser in the front seat, hands behind his back, seatbelt, windows rolled up, and the doors were locked. And another officer came as back up and they alleged that my son pointed a handgun at them. And they fired 22 shots, 14 shots struck my son and there are pictures that I have of his body on the slab with huge holes, very visible. He was shot inside the police cruiser. My son was killed a day before my birthday, two days before Father's Day. Well after a seven-month investigation, the officers were not indicted, a grand jury chose not to indict. And we even appealed but we lost everything. So the only thing I can do is to try to get them to reopen the case. But the case will never be closed for me, so I'm still going to keep talking about my son's case and other cases that I know that really did not get the justice that they deserved. " 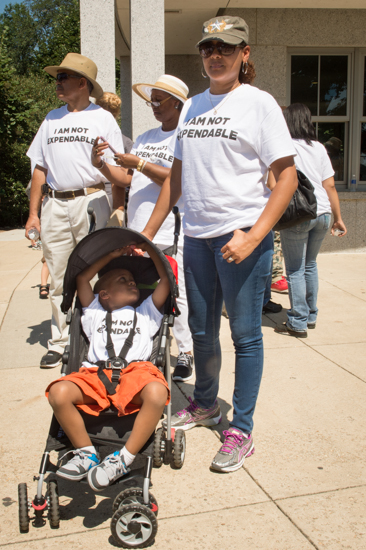