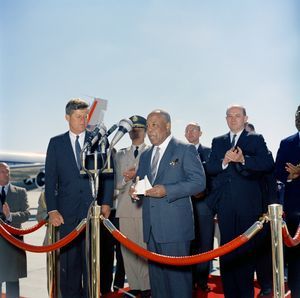 JFK with General Abboud, this picture is taken from: http://www.jfklibrary.org/Asset-Viewer/Archives/JFKWHP-1961-10-04-C.aspx.

On October 4, 1961, the Sudanese president General Abboud was on an official state visit to the United States that lasted for 11 days. The US media and the White House of President Kennedy welcomed General Abboud under banners that read, "America Welcomes President Abboud of Sudan." In his official speech, President Kennedy praised his distinguished Sudanese guest and his country as a model of peace in Africa.

That was in 1961; however, the United States has imposed severe economic sanctions on Sudan since 1997. More than 117,000 individuals have signed a petition to the White House requesting that President Obama lift the sanctions but the White House has archived this petition because it failed to meet the signature requirements as stated by Obama administration. Petition organizers referred to an article published recently in the magazine Foreign Affairs stating that although the sanctions did nothing to weaken the Al-Bashir regime, they proved to have detrimental effects on Sudanese people. With this argument, the petitioners have attempted to distance themselves from the Al-Bashir government and represent their call for lifting of the sanctions strictly in the best interests of the Sudanese people.

The economic sanctions were imposed by the Clinton administration based on concerns regarding the flow of many Islamist fighters to Sudan in the early 1990s. The presence of Osama bin Laden and some of his close associates in Sudan during the early 1990s, and a subsequent failed assassination attempt against the former Egyptian President Mubarak at a 1995 summit of African leaders in Addis Ababa, further alienated Sudan from the West. In 1998, President Clinton ordered a series of controversial missile strikes destroying the Al-Shifa pharmaceutical factory in Sudan and Al-Qaeda camps in Afghanistan.

Presidents George W. Bush and Barak Obama did not change the course of US policies toward Sudan even though the Al-Bashir government had signed the Comprehensive Peace Agreement of 2005, which ultimately led to the separation of South Sudan in 2011. Furthermore, Sudan gained almost nothing from its close cooperation with the Bush administration in the areas of security and intelligence after the tragic attacks of September 11, 2001 on US soil. According to Khalid Musa Dafalla, a senior Sudanese diplomat and a former spokesperson of Sudan's ministry of foreign affairs, the U.S sanctions were

aimed at building leverage and influence the political approach and attitude of the Government by restricting its ambitious political Islam agendas and help supporting the liberation movement of South Sudan led by late John Garang.

Despite the continued sanctions, there is a kind of one-sided love-hate relationship beneath this apparent hostility as characterized by the lyrics of the Celine Dion song, I Love You Then I Hate You, which say,

When General Al-Bashir seized power in 1989, backed then by the National Islamic Front, popular anti-US political slogans were adopted by some hardliners within the Al-Bahsir government. This anti-American political rhetoric was fueled by Sudan's disapproval of the US-led coalition against Iraq in late 1990 and Western support for the rebel fighters of southern Sudan.

Nevertheless, many Islamist leaders returning to Sudan after Al-Bashir's coup d'état were US-educated professionals who had spent several years studying at top American graduate schools. Some of these Islamists expressed enormous admiration for the US model of free market, borrowing heavily from Milton Friedman's books on the free market. They influenced permanent and comprehensive liberalization of Sudanese national economy rather than opting for a gradual implementation of free market reforms.

The results of these reforms were disastrous, with tremendous increases in poverty and the income gap between the rich and poor. Free education and healthcare became a distant memory for millions of Sudanese, the Sudanese currency deteriorated significantly, and the agriculture and livestock sectors suffered from a lack of sustainable government subsidies. Despite all these problems, Al-Bahsir's government never abandoned the US free market model.

Al-Bahsir adopted a federally structured political system similar to that of the United States, dividing Sudan into smaller federal units in the mid-1990s to further decentralize power and boost economic development. Sudan was divided into 26 states, nearly half the number of states in the US. As with many American state capitals, some Sudanese state capitals were located in small, remote towns and cities.

The creation of these states added heavy financial burdens to the federal budget and led to an expansion of government unprecedented in the history of Sudan. The decentralization of power contributed to reassertion of local ethnic identity and the Sudanese spirit of tribalism. In addition, the Al-Bashir government initiated a revolution of higher education with an eye toward the US expansion of public higher education during the 19th century to rural and remote areas. New public colleges and universities were established outside Khartoum and college enrollment jumped from 5,000 in 1989 to more than 143,000 in the 2011-2012 academic year.

The irony is that Sudan's esteem for the US remains one-sided, with no prospect for change in the near future. According to Sudanese professor of journalism and writer Uthman Abu Zayd Abu Zayd, it is unclear why the United States continues economic sanctions in spite of Sudanese efforts toward reconciliation between the two countries. For professor Abu Zayd there are no legal justifications for putting Sudan on the list of state sponsors of terrorism.

Mr. Khalid Daffalla warns of the dire consequences of continuing this regime of sanctions. He argues that the

sanction regime on Sudan is not merely unfair or unjust as depriving people from their basic rights but it also slows down the process of transformation, fueling war, denying people their due peace dividends. It's undeniable fact that these sanctions have tightened the government hands to mange properly its local economy which resulted in weakening the government ability and resources to fight internal security threats such rebel groups and terrorist organisations as ISIS that are fighting right now near the Libyan border with Sudan.