Virtual Reality! It's amazing! It's terrifying! It's the future! Nothing will ever be the same!

In the last three years, we've witnessed a boom of "Gold Rush" proportions as companies, brands, and artists scramble to develop virtual reality tools, platforms, and content, trying to figure out what will win out in this new frontier. All the while, though, Average Joe has had little more than a passing sense of its existence.

But all that's about to change. (For real this time.)

As VR finally enters mainstream (my money's on PlayStation VR to really instigate that shift), we'll get to the point where Average Jane is not only navigating VR content with ease, but she's even producing her own 360° content. The future is very nearly upon us, friends.

What's this guy's point, exactly? Can he just get to it already?

I'm a storyteller by trade. Story is everything. The stories we tell -- and how we tell them -- inform who we are and who we become. I'm invested in ethics and education, in individuals equipping themselves to navigate a market designed to fool them. More even than informed decision-making, I'm invested in fostering creativity and the courage to explore new art forms, to find new ways to build connections with each other. Virtual reality has so much raw power -- and now more than ever, we need a reminder of what Uncle Ben told Peter.

As somebody who's found himself uniquely situated to discuss the intersection of writing, storytelling structure, and virtual reality, I want to share some of the basic ideas I've learned (from making content and building a creation tool in the medium) to empower a new crop of filmmakers and storytellers to take the leap toward producing their own narrative adventures in VR.

This is three years' worth of stuff to cover -- three years of learning, speculation, and a whole lot of us talking out of our, ahem, rear-ends. In this series, my goal is to clear up some of the misconceptions about storytelling in virtual reality, share tips for avoiding the mistakes early adopters had to learn the hard way, and ultimately some techniques for creating compelling content. Power to the people!

But before I get to all that, I need to take a moment here to explain some key terms related to stories in virtual reality to get the juices flowing.

IMMERSION
Immersion in a virtual reality experience is the perception that you, the participant, are physically there...wherever "there" may be. For any virtual reality storyteller, the goal is to create such a high degree of immersion that users aren't caught up thinking, "Man, this is a cool experience," because they're too busy participating in what's happening around them. At peak immersion, audiences experience a sense of...


PRESENCE
Edward Saatchi, the producer at Oculus Story Studio describes "presence" as, "...the sense of the body, the spirit and the mind feeling it is somewhere that it is not. In Henry something that we discovered is that we started to get the sense of a character presence. What are the tricks that you can perform to make a character feel present?"

Without giving too much away, In Henry, the "trick" that achieves a high degree of presence is eye contact. But this is just one among many others, along with the countless others waiting to be discovered.

Presence is that feeling of actively participating rather than passively watching. This is why creators in virtual reality have taken to calling their pieces "experiences," "storyscapes," or "ambient stories," as opposed to "movies" or "films." But more on that down the line.

The element that helps foster the belief that we are "in" an experience is:


AGENCY
Agency, put simply, is the ability to "do something" in the experience -- to interact or react rather than simply perceive. In a movie, the director has tweaked and modulated the composition, length, color, and sound of every shot to usher us through her specific vision of the story.

As a storyteller in a variety of media, I want to make something clear: virtual reality is not "better" than filmmaking, just as filmmaking wasn't "better" than theatre. Each is a different way to tell stories, with individual pros and cons. Virtual reality may be the newest and shiniest, with wide open spaces to explore -- and we're all rightfully excited to talk about it -- but there will continue to be stories that are best told through film, theatre, et al. This is as true now as it will be in 100 years.

In a virtual reality experience, the viewer chooses how to participate. In the most rudimentary sense, that's where they choose to look. In the case of virtual reality games, user interaction fundamentally changes what the story becomes. In my own projects, I'm most interested in finding the points of intersection between traditional game and narrative. My goal is to create experiences where choices influence the experience so subtly that audiences might not realize what's happened until they've already dictated one "version" of the narrative. Ideally, at the end of an experience like this, they'll have learned something about themselves and their decision-making processes, and they'll then want to go back and explore various alternative routes. Digging into this kind of "passively active decision-making" offers a narrative avenue that, of yet, exclusively exists in VR.

Through our sense of being there, and our ability to alter our environment, virtual reality achieves a high degree of...


EMPATHY
The good folks at Merriam-Webster define "empathy" as, "The feeling that you understand and share another person's experiences and emotions: the ability to share someone else's feelings."

But in virtual reality, you don't have to imagine what it feels like -- you feel it for yourself. Chris Milk, the pioneering director behind "Evolution Of Verse," had this to say on the matter:

"What you're talking about at some point is more than a medium, but is fundamentally an alternative level of human consciousness."

And if that's too subtle for your taste, Heston L'Abbé said:

It's simple, really: when you are a given person (or "with" them), rather than watching them from a remove of time and space, you experience a greater degree of empathy. Here's an amazing example at work in VR:

In a technical sense, empathy is generated through expert use of...


POV & PERSPECTIVE
In the writing workshops I taught at UW-Madison, I took pains to differentiate between "point of view" and "perspective" -- because they are fundamentally different things. And the same holds in VR. My inner curmudgeon lives to grump himself through another day!

POV refers to who is telling the story. Perspective is how the story is told.

So, say there's an experience that involves a ghost who's tripping on some killer supernatural LSD. If our POV is 1st-person, through the ghost's eyes, you can bet the perspective of that experience will entail some craaaazy visuals. But let's say your POV is through the eyes of the other character in the scene, who we'll call Haley Joel Osment. Haley is sober as can be. We're still 1st-person but from a different vantage point, and the perspective here is going to be radically different. Not quite so trippy, brah.

But there are plenty of other possible POVs and perspectives here. What if you're a disembodied viewer (in the 3rd-person) watching Haley & Ghost. That's still going to come with a set of rules about who you are and how you perceive your environment. Are you a (literal) fly on the wall? Are you the dog on the couch looking up at the two of them? Or are you a disembodied presence? As Katy Newton and Karin Soukup definitively stated, "There is no such thing as a neutral observer."

We implicate ourselves no matter what. It's what we do. We're narcissists.

And, in implicating ourselves, we intrinsically begin to ask questions about who we are, our circumstances, and our level of agency. For storytellers in the medium, this is crucial information to bear in mind.

Quick note: If you're interested in creating stories in VR, this is the best piece available, bar none. I'm linking to it one more time for good measure:

The Storyteller's Guide to the Virtual Reality Audience 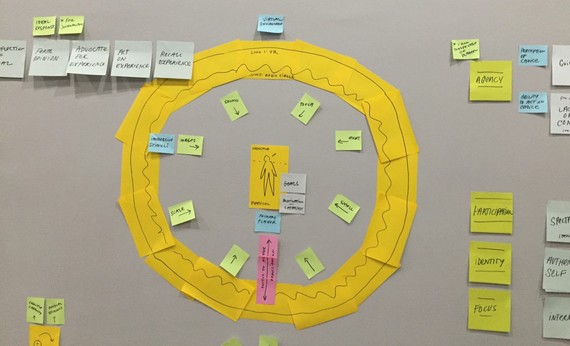 INFLUENCER
Here's a tidbit to impress people with at parties. Via Wikipedia:

Reader-response criticism is a school of literary theory that focuses on the reader (or "audience") and their experience of a literary work, in contrast to other schools and theories that focus attention primarily on the author or the content and form of the work. ... Reader-response theory recognizes the reader as an active agent who imparts "real existence" to the work and completes its meaning through interpretation.

In virtual reality, Reader-response theory holds special weight. There's been much discussion of how to "direct" viewers in virtual reality, but this misses the mark of one of virtual reality's greatest strengths: audience agency. Rather than thinking about how to direct viewers toward a specific experience, a better embrace of the form would be to consider ways to make narrative environments rich enough to elicit repeat viewings. Take Haley & Ghost. Say the creator really wants you to watch Haley tell his ghost pal off for goofing around yet again. That creator can crank up the audio, he can dim the surrounding visuals, he can even make everything but the two characters disappear. Still, he cannot force viewers to see what he wants them to the way he wants them to. If that viewer wants to kill the volume and stare at that ridiculous painting on the wall, or the crown molding, or off into the darkness, that's totally his choice -- and the resulting narrative he experiences is purely his own. Now, the creator can throw his hands up, or he can figure out what else to pack into his scene that will drive audiences to want to re-watch his experience again and again. Maybe eyes appear in the painting when you stare at it long enough. Maybe the crown molding has a hidden message carved into it that begins to glow, alerting you to a vital piece of information relating to Haley & Ghost's conversation.

That all being the case, some have encouraged conceiving of the position we've traditionally called "director" as more of an "influencer" in VR. That very well might not stick, but the idea deserves note. Influencers build an environment and invite viewers to participate, fully aware that ultimately it is audiences who create the story.

All right, chew on that for a minute, then feast your eyes on "White Guys Wearing Oculus Rifts."

Until next time, futurists!