The world's second-oldest profession has danced back into people's lives wearing spiffy new showbiz threads. It is fixing to claim its place next to acting, music and the visual arts. As soon as it gets a new name. Can you help?

FULL DISCLOSURES: 1) I do this. I even started my own special story club, called Story League (no "the" in front, please!). 2) I have been diagnosed with narcissistic personality type (not disorder; big difference). So, yes, I'm a narcissist, aren't you? But when I get onstage and tell you a story, I am a...

...What do we call these people in the "story business" (as I've dubbed it)?

"Isn't," you might ask, "there already a word for this job?" No, not anymore. "St*ryt*ll*er" calls to mind children sitting Indian style in a circle on the floor around a kind-faced matronly woman speaking in an exaggerated actor-y voice about dragons. The word is widely eschewed among the new class of performers who tell short, true, first-person stories live onstage as nighttime entertainment for adults. In front of a live, drunk audience (if we're lucky).

How about the totally unpretentious term "story artist"? Still kind of long, though. How about... Storytist. Storyist (oops, trademarked by Apple)... Stortist!

We have a winner. Stortist is the best name we can hope to come up with.

And the new verb derived from it will be to stort. As in, "Are there any affordable and promising storting events happening around town Wednesday night?" A catchy tagline for a story show series could be the simple and original "Get storted!" Oh, wait. Google shows that stort is Dutch for "garbage dump." Well, we speak English. And frankly, some of the stories I've heard lately would...

Speaking of that: There could even be two levels. A person who doesn't do st*ryt*ll*ng professionally or just stinks at it could be called a storter. But when they advance to being an artiste they may then be called a stortist.

Can you think of a "better" word? Let's hear it, then, Mr. Storypants! This is important. The future of art history is at stake. 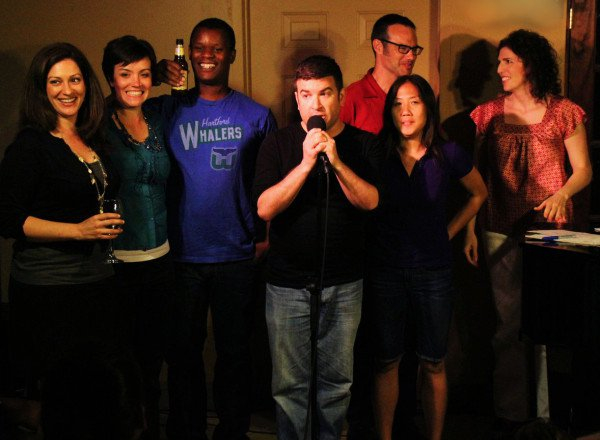