WildCare's Wildlife Hospital treats nearly 4,000 ill, injured and orphaned wild animal patients from over 200 species every year. This is one little family's story. 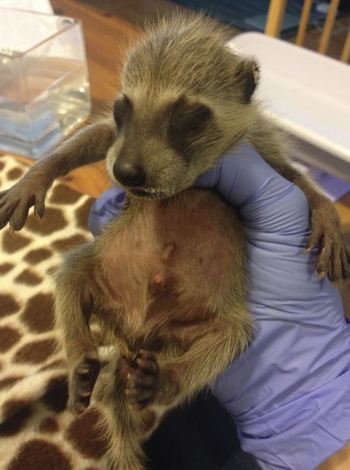 When you park a rented van at a long-term parking lot at an airport, you expect it to be as you left it when you return.

Unfortunately, someone must have attempted burglary of this particular vehicle, as a window was broken when the van's renter arrived to drive it home. A quick check of the contents showed nothing obvious missing, however, so the driver began his cross-country journey, taking the van from Florida where he'd left it, to California.

But something HAD changed... a pregnant mother raccoon must have found access into the vehicle, and considered it a cozy and safe place to have her litter of babies. Just days before the van's renter returned, this mother raccoon gave birth to six babies in a cozy den lined with a chewed-up foam mattress.

A mother raccoon stays with her young almost constantly when they're first born, but these babies' mom must have taken a quick foraging trip away from them just as the driver arrived.

The newborn babies were alone when the van left the parking lot for the five-day journey across the country to California. 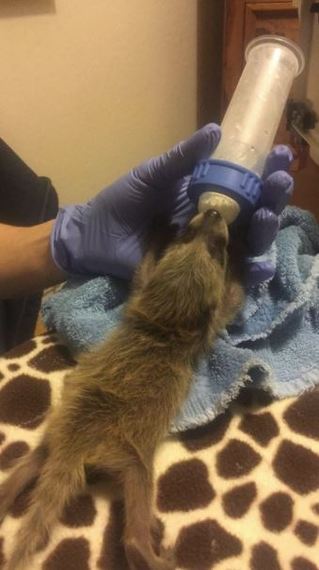 It was a real surprise when the van's contents were unloaded and the baby raccoons were found! Fortunately their rescuer knew about WildCare. Unsure even what type of animal the babies were, he placed them in a cardboard box and brought them to our Wildlife Hospital. When they arrived, we rushed them into intensive care. They were hypothermic, dehydrated and very hungry. Sadly, one of the siblings had died in transit.

The first step with tiny orphans like these is to warm them up. Staff and volunteers went into action, heating hand towels in the microwave to create soothing dry heat and wrapping the babies in the towels to raise their body temperatures. As each baby warmed, he or she (there are four surviving males and one female in the litter), was given subcutaneous fluids. A short while later, the babies received their first taste of the specialized raccoon formula WildCare uses to replace mother's milk for our orphaned babies.

The little raccoons went into care with our Raccoon Foster Care Team leader, Marie-Noelle Marquis, who initially fed them EVERY HOUR, 24-hours a day. Eventually, as their condition stabilized, she was able to move to every-three-hour feedings, allowing her to get some rest. The video at the top of the page is of one of the babies, at three weeks old, being fed at 3am. 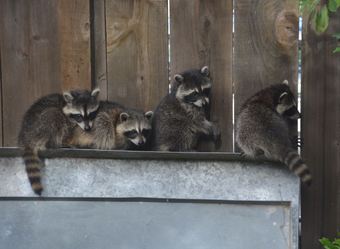 Meanwhile, WildCare Medical Staff faced the conundrum of what to do with these tiny stowaways!

Normally, when babies as young as ten days old arrive at the Wildlife Hospital, our first thought is to try to reunite them with their mother. WildCare's Foster Care teams do a fantastic job raising orphaned baby wildlife, but all wild babies are best off returning to their mother's care. Unfortunately, even if it had been possible to find the mother raccoon and facilitate a reunite in a busy airport parking lot (try getting airport security to agree to that!), much too much time had passed for a reunite to be successful. Between the five-day drive, the time required to pull the babies back from the brink of death, and organizing a reunite attempt across the country, the mother raccoon would be long gone, and her milk dried up. These babies would have to grow up in our care. 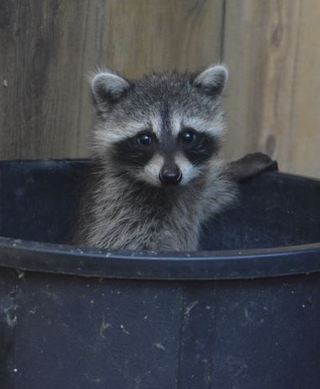 But what would happen to them once they were grown? WildCare raises and releases dozens of orphaned baby raccoons every year, but all of our baby raccoons are native to California. There are numerous laws governing the transport of wildlife across state lines, and these laws are in place for good reason. Controlling the movement of wildlife (by people) prevents the spread of disease, the possibility of overpopulation and other problems that occur when humans intervene with wildlife. These young raccoons were subject to interstate wildlife regulations, and we knew that raccoons from Florida could not be released in California-- for both ethical and legal reasons.

Our hope was that these babies could be transferred to a wildlife hospital in Florida and eventually be released back to where they came from. To this end, we reached out to the California Department of Fish and Wildlife and the Florida Department of Fish and Game, and we found a wildlife center in Florida that was willing to take the babies into their foster care program, to raise and eventually release back to the wild. 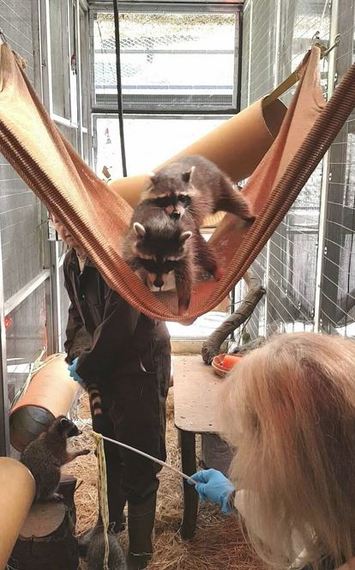 So what would become of these orphans? The options we were left with were either euthanasia or finding the raccoons placement as educational animals in a licensed facility. Euthanasia of the healthy babies, especially after all the effort that had gone into their care, was simply not an option in our minds. The only choice, then, was to find placement for them. But there was one more hurdle to implementing that plan-- California State law requires a 90-day quarantine of out-of-state wildlife before permits can be issued to place them in zoos or sanctuaries.

A call to the wonderful staff at the Oakland Zoo was rewarded with their agreement to house the five raccoons (now healthy and rambunctious juveniles) for the duration of the required quarantine period. The Zoo staff also agreed to socialize the animals in preparation for their new lives in captivity.

As of this writing, the raccoons are thriving in their enclosure at the Oakland Zoo, benefiting from lots of enrichment and climbing areas while WildCare continues to research options for their final placement. Oakland Zoo is considering taking all or some of them as permanent Zoo residents, as well.