Warning: This isn't some chump change Sundance indie movie about the rap group NWA. Nor is it a should-have-gone-straight-to-DVD after-thought about hip-hop culture. This is a full-fledged, big-budget looking homage to the L.A. rap scene, that smartly, emotionally and historically capsulizes the life and times of Eazy-E, Ice Cube, Dr. Dre and everyone around them who caused the big bang that popularized West Coast rap music. This is an Oscar-caliber film. This movie is a monster. It's big! 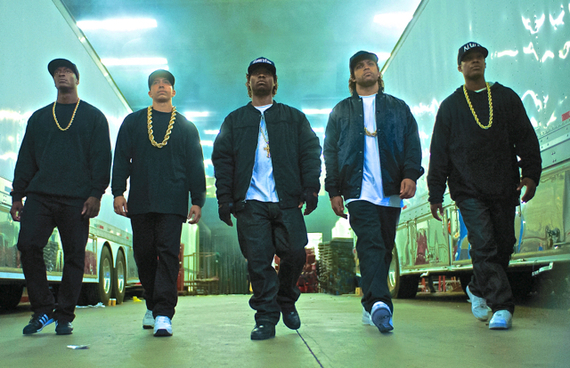 You'll need to give your undivided attention to the 2h22m of footage. Blink or go get popcorn and you'll miss an integral piece of music and cultural history that defined the times. You won't learn how legendary rappers like Tupac and Snoop Dogg entered the rap scene, or how Suge Knight hooked up with Dr. Dre, or how Dr. Dre met producer Jimmy Iovine.

From the film's first moments, you know you're experiencing greatness because everything seems so real: the visuals of Compton streets, the strong bass beats in nightclubs, the ghetto fabulous clothes, the Jheri curls, the police arrests. The performances, the dialogue, the plotline--it's all amazingly authentic. It's as if you are a fly on the wall peeking in or a narc during a drug bust watching it all go down.

Instantly the thought occurs, who the hell orchestrated all this and why is it so good? Once you read the productions notes, it all makes sense. Ice Cube (Friday), Dr. Dre and Eazy-E's widow Tomica Woods-Wright are co-producers of their own story. F. Gary Gray, who shot Ice Cube videos (e.g. "True to the Game") back in the day, and has gone on to direct urban dramas (Set it Off) and comedies (Friday), is at the helm. That's why what you're viewing is so graphic. These guys lived it. They're just sharing their experiences.

It's 1986 and 16-year-old O'Shea Jackson, aka Ice Cube (O'Shea Jackson, Jr.), is getting involved in drug deals that don't end well. Twenty-one-year old Andre Romelle Young, aka Dr. Dre (Corey Hawkins) is a wannabe record producer/DJ still living with his mom Verna (Lisa Renee Pitts) and his younger brother. He's focused on his music, and not working. Mom, who had him as a teen and is holding down two jobs to make ends meet, isn't having it. She's in his face: "People said I would be shit. You would be shit. I've worked hard. I refuse to let you throw that all away!" Next thing you know, Dre is out on the streets, with his prized LPs in tow, couch-surfing. Eric Lynn Wright, aka Eazy-E (Jason Mitchell) uses his entrepreneurial skills selling drugs, but at age 23, he's burned out and the thugs he does business with are dropping like flies.

Call it a confluence. The three decide to pool their talents and change their focus to writing, producing and performing rap music. Now, Dr. Dre is a DJ in local Compton clubs, working alongside DJ Yella (Neil Brown Jr.). Ice Cube and MC Ren (Aldis Hodge) are young emcees starting to form fierce rhymes. Eazy-E has enough drug money to invest in producing. He becomes the leader. They form Ruthless Records, cut music and become NWA--Niggaz Wit Attitudes. An ambitious music manager, Jerry Heller (Paul Giamatti), promises them gigs and a future. The rest is history, or urban folklore, depending on how you look at it.

The group comes up at a time in L.A., during the Ronald Reagan's years, when gang violence is rampant and police brutality is the norm. Their rap music reflects the turbulence in their environment and the rest of the world is shocked by their graphic lyrics that some feel glorify crime ("Gangsta Gangsta"), exploit women ("A Bitch Iz a Bitch") and verbally assault cops ("Fuck Tha Police"). When the guys tour, it's safe to say they don't perform at church socials, the National Organization of Women events or fundraisers for the Patrolmen's Benevolent Association.

As you watch NWA blow up and flame out, and get a feel for what life was like behind the risqué MTV videos, you also watch the truth about the L.A. police department unfold. The Rodney King incident exposed the practices NWA catalogued years before. You're not only watching the history of West Coast rap, but the evolution of L.A.'s inner city community and race relations.

It is a credit to the story by S. Leigh Savidge (Welcome to Death Row), Lan Wenkus (Private Resort) and Andrea Berloff (World Trade Center), which evolved into an astute screenplay by Berloff and newcomer Jonathan Herman, that all the pieces fit so neatly together. You never feel like anything is missing, or that characters aren't saying what's on their mind, or the storytelling is not leading somewhere important. A lot is packed into the brilliant and revealing script.

Casting actors who are not recognizable faces helps the cinema vérité factor. For all practical purposes, they are the rappers, girlfriends and entourage. Corey Hawkins nails the ethereal essence of Dr. Dre. Casting O'Shea Jackson Jr. as his dad Ice Cube was a stroke of genius and is absolutely haunting. Paul Giamatti as the helpful but devious manager exhibits the right amount of smarm. Burly stuntman turned actor R. Marcos Taylor walks like a hardened felon on death row and oozes an evilness that exudes Suge Knight. Jason Mitchell has the widest array of emotions to play as Eazy-E, who is gangsta tough, then extremely vulnerable. If there is a surprise scène-stealer it's Lisa Renee Pitts as Verna. The opening scenes are pivotal and she sets them off perfectly as the exasperated mom who wants her kids to succeed and survive. Her time on screen is short, her performance is huge.

The tech credits, acting, and writing are superb, but the lion's share of accolades must go to director F. Gary Gray. From the film's opening sequences you're questioning who pulled all of this together so perfectly, and it's him. Certainly when a film features an ensemble cast of relatively unknown actors and all give universally strong performances, credit goes to the director for guiding them through. There is not one flawed, imperfect, plastic moment in this entire movie. Gray should be proud for realizing all the potential of this historic movie.

This is a monster film. You will walk out feeling like you have been entertained, educated and emotionally fulfilled. Eight months into the year 2015, and this is the only perfect film that has hit the theaters. This is it!