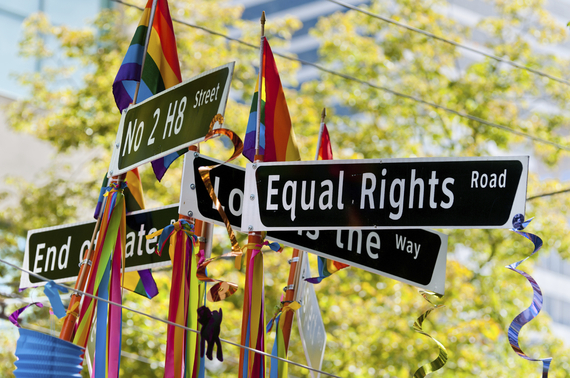 Pride is an interesting word and idea. It's very presence and concept is ingrained in our society. We know from the Bible that it "cometh before a fall" and have been advised to "swallow" it occasionally. It is often thought to be a negative trait and is described as a high, or inflated opinion of one's own traits, abilities and socio-economic position. But to me, and many of members of the LGBT, pride is not defined this way. We are not arrogant or lofty or full of ourselves. We don't inflate our importance or try to deflate others in order to make ourselves feel or appear more important. We don't sacrifice others' feelings as a means to create a higher image or impression of ourselves. To us, pride is not a negative personality trait or a result of arrogance or insecurities. Pride is a deliberate attempt to equalize a society. Pride is a statement, an attitude and a decision. You see, we have been questioned and accused, abused and diminished for the entirety of history. We have been told that we are deficient and defective. It's assumed by much of the population that we are either mentally ill or dealing with residual emotional baggage brought on by childhood tragedy. It's assumed that our misguidance or rebellion can be fixed through therapy and that, perhaps, we will eventually abandon our lifestyle and become heterosexual.

During this past week of all the marriage equality decisions going on in the United States Supreme Court, I noticed some people posting meme's championing "straight pride" on Facebook. The catchy phrase and illustration stated how proud they were to be straight and it encouraged anyone amongst their friends (which is predictably most of their list) who is straight and proud to repost it to their own wall. REALLY?

It's apparent that people don't understand the concept of gay pride. Even some of my family have no clue.

Let me explain it to you.

Gay pride is the desire and ability to be brave and have pride in yourself even though you've been told all your life that you are less of a person because you're gay. And though you've been laughed at, called names, teased through school, you can hold your head-up high instead of down in shame. So when we promote our gay pride, we are saying that we are not ashamed of who we are and will not, despite bullying, wear the labels that you have tried to stick on us. It is our response to a world that dehumanizes us and believes we are just faggots, sissies and worthless freaks who are going to hell without a trial.

When a heterosexual posts a picture declaring their "straight pride" it's not effective. It may tell the world that you're not gay, but it also tells the world that you're an asshole. It says that you are so insecure with your own sexuality that you have to label yourself. You're afraid that your association with me or other gay people may cause others to question your orientation. It says that you feel threatened by what I and other LGBT warriors are doing. You obviously feel that our voice is loud and hard to ignore or you wouldn't be trying to drown it out with your own propaganda. It tells me that you are listening to me and though you don't agree, that you see that my tactics are effective. Imitation is the highest form of flattery, right?

Is it a double standard that I should be able to post pride images and you can't? No. You don't have to. You have not been threatened or demeaned because of your sexuality. You haven't been told you're not eligible for basic rights because of who you love. You don't have anything to overcome. You don't have to convince the enemy that despite their best efforts to keep you down, you still know you are a quality person. You see, when we say we have pride in ourselves, we are not trying to create a cool, exclusive club complete with membership cards and a secret handshake. We are not trying to sound arrogant or trying to put down those who are not gay. We are trying to show our strength and solidarity.

We have fought too long and worked too hard to come out of the closet, we will not allow anyone, family, friend or foe, to shove us back into that nasty, dirty place. We are out and we are out to stay. No more hiding in closets or behind masks. We will live an authentic life and do it without apologies. Get over it and used to it.

We are progressive and normal minded people and are working every day to try and make America a level playing field for everyone. Our victories should not just be celebrated by the LGBT community, but by women, who have and still struggle for equality, and by racial minorities who are familiar with the pain of discrimination. They should also be celebrated by religious folks who want to maintain their freedoms and anyone who calls themselves a decent human being. Rights should be freely enjoyed by all people, not just the majority. The right to vote and live a full life should be available for all citizens. There is no such thing as gay marriage or straight marriage, but just marriage. Marriage has no prefix.

And that, my friends, is why I not only fight for rights, but for what is right.

I will not stop until all my LGBT friends are allowed to dance at their own weddings and celebrate the addition of a child to their recognized family. I will continue to post news and human interest stories related to my cause. I will also post memes with rainbow backgrounds encouraging others like me to be proud of who they are. I will encourage those who are too afraid to be themselves to shed the negative labels and hurtful accusations and to wave their colorful flag high. Will homophobic and bigoted heterosexuals still post their "straight pride" meme's? Probably, but it doesn't shock a world to find out you're heterosexual, as its likely they already assume that. It will, however, surprise them to find out what an asshole you are.