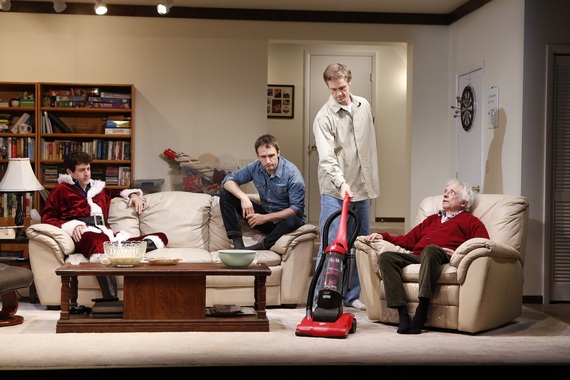 "Straight white men" are three words that I hear a lot. Often they are the subtext behind generalizations on TV or even in small talk. When people say, "this is how it is for everyone," it tends to be a straight, white, man talking about "everyone" who is also a straight, white, man. So, when I first heard the title for Young Jean Lee's newest theatre piece, I immediately began imagining all the possibilities of plot and staging. What would it look like?

I have been a fan of Lee's work since first reading Songs of the Dragons Flying to Heaven, and upon seeing We're Gonna Die and Untitled Feminist Show I became an official follower. You see, though Lee is certainly not the only playwright exploring various aspects of identity and the societal relationships to those identities, she does so in a way that uses the audience's own expectations and denials in a way no one else does. She's like the theatrical version of working out with your own body weight as resistance.

When I wrote about Untitled Feminist Show, I noted the fact that the title itself is both loaded and accurate. Here with Straight White Men, this pattern has repeated itself. The two shows are structurally different, but simultaneously similar in their effects. Both of these pieces were co-produced by Young Jean Lee's Theatre Company and challenge our assumptions about the identities listed in the titles, and both use the genre of the piece to challenge and explore these questions.

Walking into The Public's Martinson Theater space, the audience is greeted by David Evan Morris' picture-perfect realistic living room set. Think The Honeymooners or even Death of a Salesmen. In fact, do think of the latter, since it's another play about a straight, white, male father and his sons. We know what "this" play is. We are comfortable with straight white men talking in a realistic way about issues on a set that looks like the fourth wall has simply been removed.

You might think you're about to see a lost Arthur Miller play on Broadway, except that I doubt most would choose to blast hardcore female rap for the pre-show music of whatever that play might be. Indeed, I couldn't help but move to the beat in my seat as I watched ushers do the same. And though some patrons covered their ears, I smiled with glee at the juxtaposition of what I was seeing a hearing, a hint of subversions to come.

The most brilliant aspect of this play, and certainly this production of this play, is actually what it is not. Through some of the best ensemble acting I've seen in some time, these four white, straight, male, (liberal, American) characters are shown to be trying their best to navigate the world as best they can. The characters on stage are not there to be hated, or belittled, or blamed for the world's problems, nor are they there to be pitied for their undeniable privilege. Instead, these individuals force all of us to ask a crucial question: what's the best way to handle that identity in the world today?

Because these men, father Ed (Austin Pendleton) and his sons Jake (Gary Wilmes), Drew (Pete Simpson), and Matt (James Stanley), are a family of socially conscious individuals, the result of this provocatively titled realistic drama is complex. First of all, they are believable as a family: their relationships are equal parts love, history, and a simultaneous recognition and challenging of each other's boundaries. Second, the more we learn about these men, the more we realize that they do not fit the usual image associated with straight white men in the patriarchy. Ed and his late wife taught their sons about privilege. Drew is a socially conscious teacher and writer. Matt was always interested in social justice and has spent a number of years working for non-profit organizations. Even Jake, who works for a bank and is the most financially successful member of the family, cannot pass on his straight white male privilege to his children, as he was married to an African-American woman and his children are therefore mixed race.

Seeing these four straight, white, male bodies on stage in front of us does not seem unusual. Yet as much as the title of the play calls attention to their presence, the production conditions do not allow those three words to identify all of the performers involved. Let me explain: the straight, white, male cast of Straight White Men is partially an illusion. There is a Korean-American female playwright bringing these characters to life, a trans* individual giving the curtain speech and acting as one of the stagehands, and the recognizable voices of women of color rapping as people settle into their seats. The use of these framing devices keeps the show from reproducing a kind of exclusion in order to interrogate the cast's apparent uniformity.

Sitting in the theatre at a Young Jean Lee play is the kind of experience that makes me happy to be alive at a time when such a smart and hardworking playwright is producing new work. This is the third time in a row now that I've left a new play of Lee's thankful that I have had such a rich theatre experience, one that's kept me thinking about its provocations long after. This family of straight, white, men are individuals who happen to belong to a larger group, just as every single person in the world is a part of some group identification or another.

Leave it to Young Jean Lee to get straight to the point, by saying: okay, now what? Straight White Men doesn't give us the answer, but I think it does very important work by challenging us to confront three-dimensional characters that we can't easily dismiss. So head straight over to The Public and see for yourself. Straight White Men is a production by Young Jean Lee's Theater Company and is commissioned by the Wexner Center for the Arts at Ohio State University, Center Theater Group (Los Angeles), Steirischer Herbst Festival (Graz), Les Spectacles Vivants - Centre Pompidou (Paris), Festival d'Automne à Paris, and The Public Theater (New York). It runs through December 7.