If you have the chance to have lunch or grab a drink in the Petrie Court Cafe at the Metropolitan Museum of Art, take notice of the unique dining companions you'll find sharing your elegant surroundings. Reaching the cafe through the Carroll and Milton Petrie European Sculpture Court, you'll pass by large-scale, nineteenth-century work of art that may seem at odds with the cafe menu, especially those featuring starvation themes. 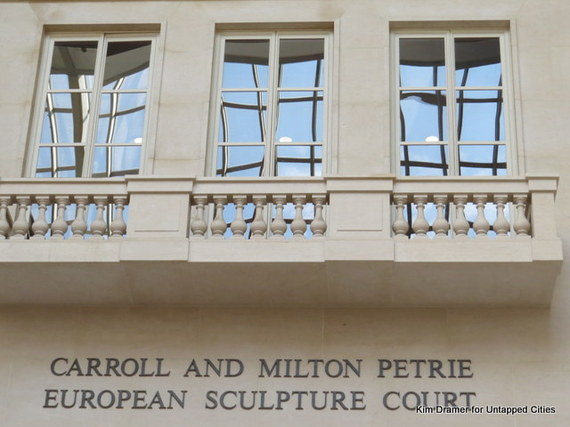 The Burghers of Calais by Auguste Rodin, 1889

Here's a statue about starving historical figures to enhance your dining pleasure at the Petrie Court Café. Rodin's bronze sculpture, The Burghers of Calais, commemorates an episode during the Hundred Years War (1337-1453). England's Edward III (1312-1377), laid siege to the town of Calais, situated on the French side of the English Channel (known as La Manche or "the sleeve" by the French). 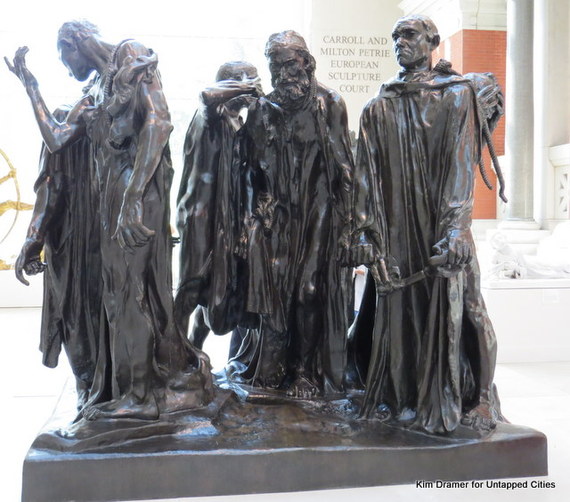 The French king, Philip VI (1328-1350), known as "the Fortunate," ordered the city to hold out against the English. But when Philip failed to lift the siege for over a year, starvation forced the city to parley for surrender to the English in 1347. Edward offered to spare the people of Calais if six of its leaders would surrender the keys to the city gates and castle, presenting themselves to him with nooses around their necks for execution.

Fast forward about 500 years to the city of Calais 1884, now ruled by the Third Republic. Artists were invited to submit proposals for a public monument to commemorate the historic episode. Auguste Rodin's composition was modeled on the version of events written by the French chronicler Jean Froissart (1333 or 1337-after 1400). 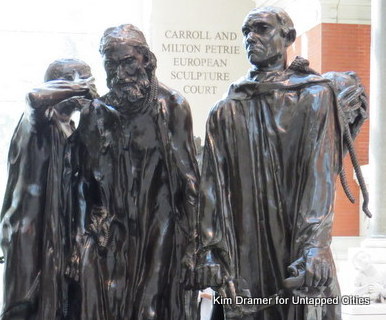 Rodin portrays leaders of Calais at the moment of departure from the city. He has taken pains to emphasize their wretched physical state from starvation, as well as their various states of despair. It's the perfect sculpture to place at the entrance to a restaurant, n'est-ce-que pas?

But go ahead, order the three-course prix fixe luncheon at $46 (not including tax and tip). King Edward's wife, Queen Philippa, persuaded her husband to spare the lives of the burghers of Calais. She claimed that their deaths would be a bad omen for their unborn child. So, if you're eating for two, also try the local artisanal cheese plate (three selections!) at $16.50 or the ice-cream sandwich (vanilla or chocolate chip), which will set you back $7.00. You do the math.

You'll also find versions of the Burghers of Calais in the Brooklyn Museum and in the Rodin Museum in Paris.

Ugolino & His Sons by Jean-Baptiste Carpeaux, 1860 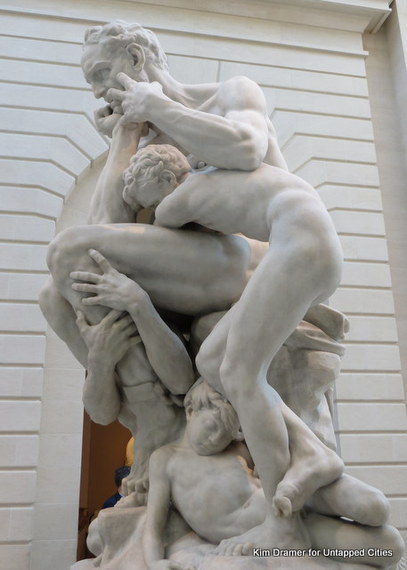 Another sculpture featuring the theme of starvation is featured just before entering the Petrie Court Café. Towering above diners entering the restaurant is Ugolino and His Sons, by the French sculptor Jean-Baptiste Carpeaux.

Ugolino della Gherardesca (c. 1220-1289) was an Italian nobleman of Pisa. Ugolino died in the struggle for power between the Guelphs and the Ghibellines. You read about this studying for your AP history exam and some of you may actually remember that these were factions in Italian city-states supporting the Pope or the Holy Roman Emperor, respectively.

Ugolino, having backed the wrong side, was imprisoned with his sons and grandsons in the Muda Tower by Archbishop Ruggieri. The holy man then ordered the keys to the tower be thrown in the Arno River. Ugolino and his sons were left to starve to death in the tower.

Dante Alighieri writes of Ugolino and his sons in Canto XXXII of his Inferno. In the text, the sons, seeing the tormented Ugolino gnaw on his fingertips, mistake his gesture for hunger and offer up their own flesh saying: "Father, we should grieve far less if thou wouldst eat of us." The Italian composer Gaetano Donizetti includes the first 84 lines of Dante's Canto XXXII in his Canto d'Ugolino.

Ugolino is know as "The Cannibal Count," a reference (depending upon who you ask), to the idea that Ugolino, driven mad by hunger, devoured the corpses of his offspring. Or, that he died of starvation after he had failed to die of grief. Your choice. 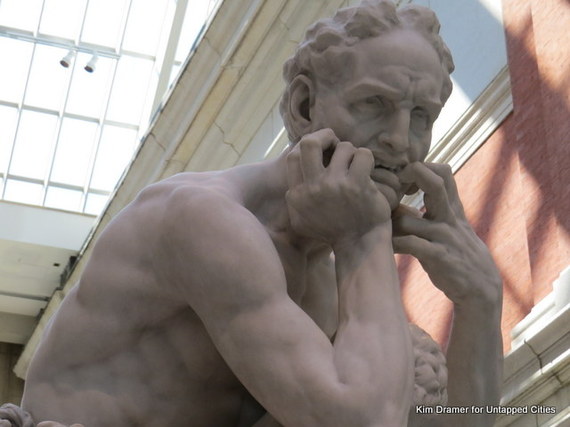 And, while you're choosing your version of the tragic tale, take a peek at the menu of the Petrie Court Café. A cup of coffee will set you back $3.75. That's the New York version of why Ugolino is biting his knuckles. 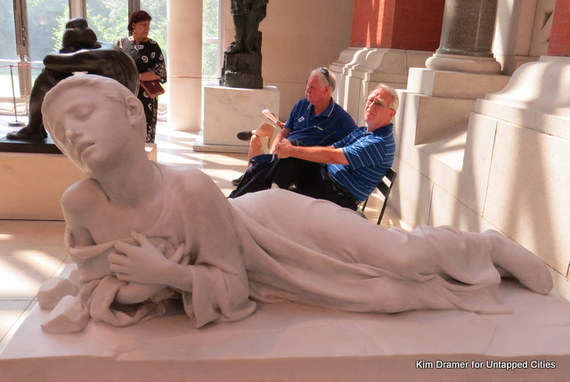 The artist Alexandre Falguière's inspiration for the sculpture Saint Tarcisius was a tale of early Christian persecution under the Romans. The teenage acolyte Tarcisius met secretly in the Roman catacombs with fellow Christians. Charged with conveying the Host to imprisoned Christians, Tarcisius was confronted by pagans along the Appian Way. When ordered to reveal the Host, Tarcisius refused. He was stoned to death with paving stones from the famous Roman road. 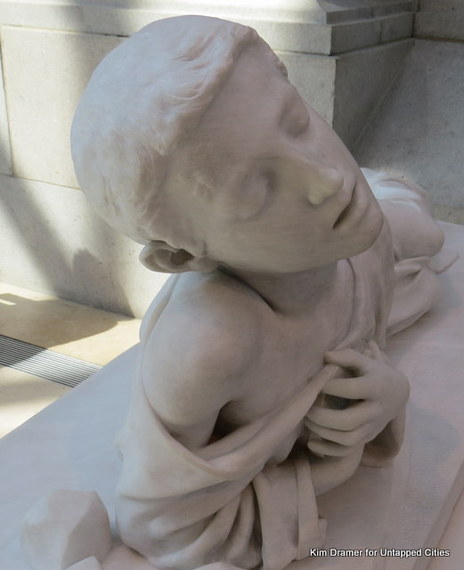 In Falguière's marble statue, the fatal paving stones lie at the elbow of the fallen martyr. The Host is clutched in his arms, while his face exhibits an expression of beatific rapture. Tarcisius is the patron saint of First Communicants, but (let's be frank) he makes a strange companions for diners at the Met's Petrie Court Café .

Once seated in the Petrie Court Café, your waiter will bring you a basket of assorted rolls. Hopefully, you will not be too put off these offerings by your appreciation of Falguière's marble depiction of St. Tarcisius clutching the Host to his breast. There is no charge for bread (and butter) at the Petrie Court Café. Enjoy.