Scientists with cameras are a fun bunch, especially when they stumble upon something crazy-looking and mysterious they had no idea they'd see.

In the above video, a purple blob looks like a piece of trash drifting in the current. But when it starts to move, these scientists get pretty excited.

That's because what they're seeing is a rare creature called a siphonophore. Actually, it's not just one creature, but a whole colony of animals, called zooids. Siphonophores are composed of dozens of them, and each have specialized functions. For example, some zooids help with swimming while others feed, according to Siphonophores.org.

Researchers on the Ocean Exploration Trust's EV Nautilus captured this unusual one as it crossed its cameras during an expedition last month in the Gulf of Mexico. The scientists can be heard ooo-ing and aah-ing over their discovery, estimating its size to be about 15 to 20 Wiffle balls, give or take. (Using a Wiffle ball as a unit of measurement underwater provides size prospective when analyzing images.) 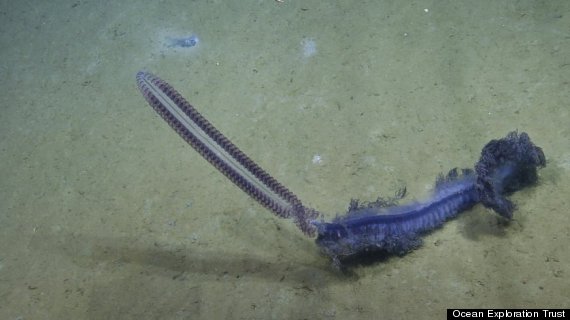 Siphonophores belong to the phylum Cnidaria, which includes corals, sea anemones and true jellyfish. Some species of siphonophores can grow up to 130 feet in length making them the longest animals in the world, according to the Monterey Bay Aquarium. The animals, which use their tentacles to capture small fish and crustaceans, are also very fragile and can break apart with the slightest disturbance.

The most notorious of all siphonophores is the Portuguese man of war, which lives near the ocean's surface, unlike this one. And, like the man of war, this guy's sting would probably pack a hefty punch, according to the EV Nautilus researchers.

But what makes this little dude especially interesting is its coloring. Typically, siphonophores that live in the deep sea can be red or orange, Deep Sea News reported. Steven Haddock of the Monterey Bay Aquarium Research Institute -- who studies these animals -- told Deep Sea News many species within this group (Erenna spp.) may get their dark color from the fish it eats.

We wish it well on its journey across the ocean floor.