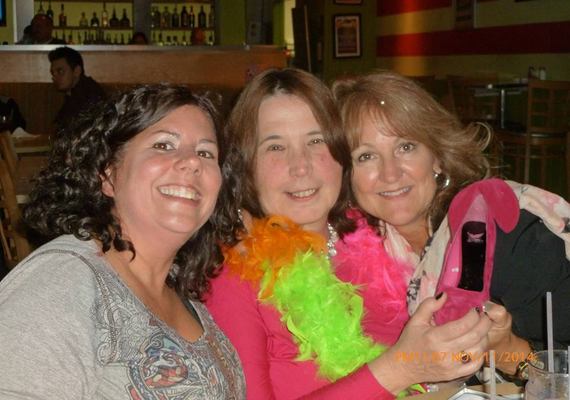 Once upon a time in a youth far, far ago, I enjoyed a reputation as a fabulous party host. Like many grown women, however, the parties I held after my twenties mostly entailed juice boxes and preschoolers peeing their pants while waiting in line for the piñata.

My plans to throw a terrific party at the age of 52 presented new challenges: the biggest one being I wouldn't know a single guest.

Hosting a "Stranger Party," as one of The 52/52 Project's year of new personal adventures, intrigued and intimidated me. Entertaining a group of adults I'd never met would surely prove awkward. I hoped for at least a few moments of levity and laughter.

I formed my guest list by asking friends to invite someone. The rules were: We could never have met; they couldn't know each other; and they must come alone. My own apprehension aside, these adventurers would need to be superheroes.

My next challenge: How did one plan a party, knowing nothing about the guests? Unlike my young adult years, supplying cheap alcohol and a couple bags of Doritos wouldn't suffice. I bought an assortment of beverages and prepared a huge feast. After all, this was 2014. Someone was sure to require vegan, Kosher, low-carb, or gluten-free.

I tackled my woeful windows and mopboards, and I planned games to break the ice and break up the inevitable long lulls in conversation.

But then the Hellacious Winter That Would Never End tossed another storm our way. Soon, the phone calls began, from guests fighting their way through the snow into the boonies of Waterville, Ohio. Surely a few would conclude an uncomfortable evening with strangers wasn't worth the effort. Surprisingly, all seven persevered. That alone proved this would be a remarkable group of women.

Yes, we were all women. Although I'd encouraged friends to invite guests of either gender, all the takers ended up female.

Besides that, we shared few similarities. We ranged in age from 22 to 74, with diverse careers. We were divorced, married, and single. Some had small children, others had grandchildren, and the youngest was a recent college graduate still living with her parents.

These details came out early, during small talk over wine, stuffed mushrooms, and smoked salmon. But that small talk segued -- amazingly fast -- into much more.

We soon ventured into deeper topics: moral, religious, and political. We each shared our thoughts, with only a twinge of discomfort in the most passionate discussion. And we moved on to confessing our most personally embarrassing and hilarious stories: like one woman's horrific "burning crotch" anecdote and another's tale about the huge spit bubble she produced while engaging with a prospective date.

We laughed and nodded in empathy. We conversed like we'd known each other forever.

What was happening? I'd never been at a party like this, never met people quite like these.

Perhaps the pool of guests was narrowed to our advantage. After all, who but an outgoing or courageous individual attended a party, alone, with total strangers? Did the fact that we were all women make a difference? Or, maybe we felt we had nothing to lose by sharing so much with people we figured we'd never see again.

We held back little. No one seemed self-conscious or embarrassed. Well, no one except the hostess, who was so busy accommodating guests and drinking wine that she forgot to eat. Somewhere between asking my new friends to attempt my own 52/52 challenges of dining in the dark and eating insects -- and my next plan for them to try belly-dancing -- the evening grew blurry. While my fortitude for new experiences had grown in leaps and bounds through The 52/52 Project, my tolerance for wine remained pitiful.

The next morning, I sent off an email to them each, thanking them, apologizing for being "over-served," and hoping we still shared the love. The heart-warming thread of emails flew for days.

"I had more fun with you 'strange' ladies than I have had at any party I have ever attended."

"I can honestly say I've not enjoyed myself like that in quite some time."

And, finally, this email: "Each one of you is so unique and has so much to contribute to this group, which I suggest we call 'The 52 Club,'" she wrote. She suggested this single experience was worthy of a book in itself for me to write: "Our story of eight ladies of diverse backgrounds and ages, and the developing friendships that ensued."

Perhaps she was right, because our story didn't end there.

We began to meet monthly, catching up on news of each other's families, dating experiences, and jobs. Sure, those evenings together gradually grew more intermittent, as happens with most friends. I became busy with writing. One member in our group moved out of state. And both our 22-year-old and our 74-year-old friends found new romances.

But as time passed and circumstances changed, we remained connected. I have a feeling we always will. And even if months go by before The 52 Club gathers again, that just means we will have more to discuss.

Sometimes, the most random experiences in our lives end up being the most significant.

Is it truly possible for a group of people, who had never before met, to form lifelong friendships in one single evening?

I'm continuing the essence of that Stranger Party with a Stranger Party National Tour over the next year, inviting people I don't know -- good friends who just haven't yet met -- to join in small groups for fun and unusual experiences. We have outings planned in places like Milwaukee, Austin, Denver, and Boston. See The 52/52 Project's posting of events for more information. When's the last time you did something for the first time?