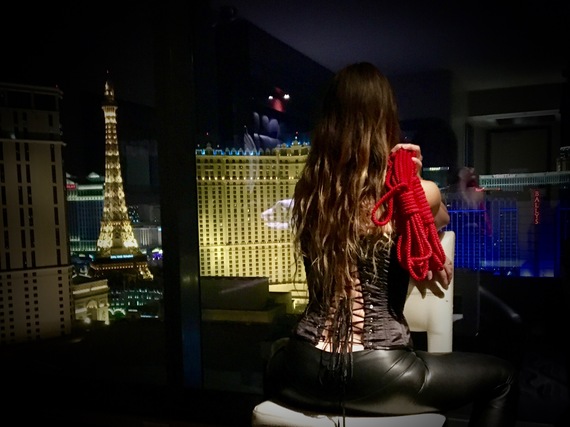 My husband and I were headed to Vegas. I peeked at the monitor as my bag went through the airport scanner to see how obvious it was that I packed a corset, leather pants, rope and lube. We'd never tried role play before, but in the spirit of exploring new things in our sexual life, we decided the weekend away from our everyday lives was the perfect opportunity. Specifically, our plan was to enact the classic "strangers meeting in a bar" scene.

If you had told me two years ago this is what I'd be doing that weekend, I would have laughed in your face. Between my full-time job and taking care of our young son, there wasn't much energy (or creativity) leftover for our sex life. But we'd been re-engineering our sex life with the help of a sex and relationship coach, and playing with power dynamics was next on our list of things to experiment with.

We started the night as our real selves over dinner at a funky and sexy fondue restaurant that served unlimited wine in glass baby bottles. As soon as the bill arrived, I excused myself and started walking down the street to a pre-determined bar. Along the way, I got hit on by some men in a truck with a real chihuahua on the dash. At that point, I knew that if nothing else, this was at least going to be an interesting night.

Stepping out of the dark street and into the darker bar, I scoped out the scene. It was so weird going into a bar pretending to be a single woman. My stomach started to get butterflies as I looked at everything with new eyes. Where should I sit? What should I do? I selected a seat and made some small talk with the bartender while I ordered a drink. Then he walked in.

I was nervous, but tried to play it cool as he sat down at the empty seat next to me. He didn't even acknowledge my presence as he struck up a conversation with the bartender. Finally, he turned to me and introduced himself as Drake. Oh boy, I didn't realize we weren't using our real names! He explained he was a film producer in town from LA and was mysterious about what type of films he produced. It was funny to watch my own reaction which seemed a heady cocktail of internal mirth mixed with external resistance and overall intrigue.

As he took the last sip from his glass, he mentioned that his penthouse on the strip had a great view of the Eiffel tower, if I'd like to check it out. I toyed around with playing hard to get, but my enthusiasm for moving the night along won out and I said "yes." He chivalrously told the bartender that he would pay for our drinks. As the bartender transferred the tab and handed me my credit card back, I wondered if he would notice our two credit cards had the same last name. But he didn't bat an eye during the entire exchange.

Outside, my husband impressively stayed in character by answering the Uber driver's call as Drake even though we both knew that he could see his real name on the app. Drake even kept the story alive as our driver asked questions about his penthouse.

I'd be lying if I said that I didn't have a girl boner in the elevator on the way to the room. I mean, here I was with a sexy-as-hell "stranger" who clearly was about to dominate me in the bedroom. In my normal life, I struggle to cede control to anyone. But there was something liberating about these fake personas which helped me lower my guard and lean into the experience.

A few months before our trip, we'd taken our first rope bondage class. In it, my husband became frustrated with my attempts to help him with the ties. Tonight however, the choice to use ropes in the role play was a stroke of pre-meditated genius. Like pouring gasoline on a fire. And just like the stranger persona allowed me to let go of my need to control, the Drake persona seemed to imbue my husband with an extra dose of confidence. As this confident stranger tied me into a state of immobility a little rougher and faster than my husband would have, I decided I really liked Drake.

For full disclosure, there were some mishaps along the way. Like when I couldn't stifle a laugh when hearing Drake talk about his playboy Los Angeles lifestyle. Or when I was feeling so good that I called out my husband's actual name during climax. Sue me.

If you are interested in exploring your sexuality, check out the books and websites listed at www.downtothere.com/resources.