There are very few books that offer a totally immersive experience, one where the reader can look around and see, feel and taste the world the author has created.

Legacy of Kings is one such novel. This YA historical fantasy imagines Alexander the Great as a young man. Every aspect of the story is alive with intrigue, mystery and delicious details; it's truly a must-read novel of the year.

I spoke with author Eleanor Herman about Legacy of Kings, truth that's stranger than fiction and writing her first YA series.

Q&A With YA Author Eleanor Herman 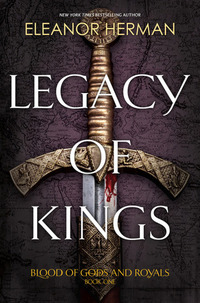 Having traveled to the major sites of the ancient world, what has surprised you the most about past cultures?

EH: I'm constantly astonished by the level of human ingenuity in past cultures. How did they build the Pyramids, Stonehenge, and countless massive temples, palaces, arenas and bath complexes -- including getting multi-ton stones from point A to point B -- without trucks, bulldozers, and modern cranes? How did the Romans build all those aqueducts and pump fresh water across their empire? How did the Carthaginian general Hannibal get all those elephants over the Alps? How did Alexander the Great lead tens of thousands of men through hostile tribes, and over deserts, swamps, mountains, and rivers from Greece almost to India?

I'm constantly amazed at the sheer audacity of the ancient mind: figuring out how to build that and go there no matter how difficult it was. Our culture is spoiled; we have machines to do the work. Back then they had shovels, ropes, and their own blistered hands, and they achieved the most stunning results.

Are there any stories you've uncovered through your research that you won't believe are true?

EH: There's one that absolutely blows my mind. In 73 BC, two armies faced off in Bithynia, the northeast part of what is now Turkey. One was led by King Mithridates of Pontus, defending his lands from the Romans. General Lucius Licinius Lucullus headed the Roman army. Picture this: thousands of men on each side are lined up, horses pawing the ground, spears raised, swords out, arrows nocked, waiting for the command to attack.

Then a flaming rock comes whistling out of the sky and lands smack dab in between the armies, spewing everyone with dirt and forming a colossal crater. A meteorite. No one was hurt but there was this flaming hole between the armies. Both generals figured the gods were mad at them so they turned around and high-tailed it out of there. It was, quite possibly, the first battle ever won by an alien from outer space.

What did you find challenging and rewarding about writing Legacy of Kings?

EH: It would have been far easier for me to write from one or two points of view. Most YA authors do. But I wanted to create a rich, complex world and get into the minds of many characters. Legacy has 16 characters -- three boys and three girls, all of them attractive and courageous, the kinds of characters teens want to read about. But at first it was difficult for me to create distinctive voices. All six needed to have very different personalities and ways of looking at the unfolding action. But as I wrote, the characters seemed to develop on their own. Their voices became clearer. It's so much easier writing the second book in the series, Empire of Dust!

I loved how some of the strongest and most vibrant characters in the book are women. What was it like writing their stories?

EH: I loved writing my three female teen characters because they were so very different and so much fun!

Katerina was raised in a dirt-poor village but ends up in the royal palace of Macedon, intent on killing the queen to avenge her own mother. I didn't want her to be impressed with the sudden luxury of her life but to focus on what is real -- family, love, and the need to stop the evil queen from murdering again. It was fun to write her story because -- though I'm not planning on murdering anybody -- I am in many ways like her. We have houses going up in my neighborhood the size of Victorian insane asylums with rooms so cavernous someone should glue stalactites to the ceiling. I...just...don't...get it.

Princess Zofia of Sardis runs away from a forced marriage to Alexander to be with her true love and is captured by illegal slave traders. I enjoyed crafting her journey from a thoughtless, self-absorbed princess to a resourceful young woman honing her survival skills.

And Alexander's half-sister, Princess Cynane, is an Amazon-style warrior woman intent on grabbing power, even if it means ruining friendships and murdering innocent people. Once you read about an event in her childhood that messed her up badly, you can sympathize with her. And you just have to admire her in-your-face nastiness in standing up for herself. My favorite line in Legacy is when she has set fire to an attacker who is now writhing on the floor, burning alive, and she looks at him and says, "Call me 'bitch' again." Today Cynane would be the CEO of a Fortune 500 company would say the same thing, I think.

What other historical nonfiction or fiction books would you recommend to teen readers?

EH: I recently read a fabulous novel called The Notorious Pagan Jones by Nina Berry, about a bad girl teenage Hollywood star filming a movie in Berlin just as the Soviets close the border between East and West and start building the Berlin wall. It's the closest thing to time travel because it completely submerges you in 1961. A Northern Light by Jennifer Donnelly is a hauntingly beautiful, poignant coming-of-age story about a teenage girl in upstate New York in 1906, whose efforts to get the money for college involve her in solving a girl's murder. And then there's Grave Mercy by Robin LaFevers, set in fifteenth century France with a fantasy twist. (How can you not love a convent of assassin nuns?)

Legacy of Kings is available in bookstores and online August 18th.