Marcel Dzama is the most renowned draftsman of his generation. But that distinction is not enough: he also makes sculptures and dioramas, directs music videos and short films. Behind Every Curtain, his current show at David Zwirner, features his longest work yet, A Game of Chess, a 14-minute film involving ballet, chess, and a sniper. It's typical Dzama: mysterious, seductive, punctuated with violence and the occasional girl in knee socks. A founder of the Winnipeg collective, The Royal Art Lodge, and a designer of dynamic artist's books, Dzama possesses an indispensable inventiveness, at once fascinating and virtuosic.

We spoke recently in Manhattan. 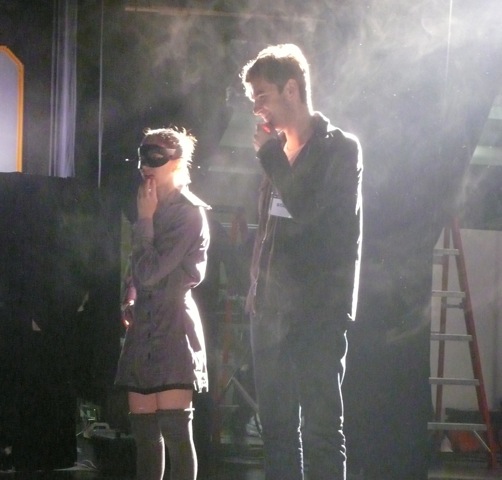 King's Gambit: The artist on set.

There's a lot of ballet in the film. Where did you come up with the idea of using dance?
I first worked with dance during a music video for The Department of Eagles video. No One Does It Like You. Working with the dancers was so refreshing. It was also a way of showing off costumes because you don't need much of a story. I'd also seen Oskar Schlemmer's Triadic Ballet, which was a huge influence on this entire show.

What appealed to you about that work?
The costumes worked with the movement of the dancers, and that was what I wanted to do. The costumes, at the beginning of this, were supposed to limit the movements of the ballet dancers to what the chessboard pieces were originally supposed to do, I was going to make it so the costume would be so the knight dancer could only dance in an 'L' shaped pattern, and the bishop diagonally. In the end that all changed, more for the dancer's sake than anything. 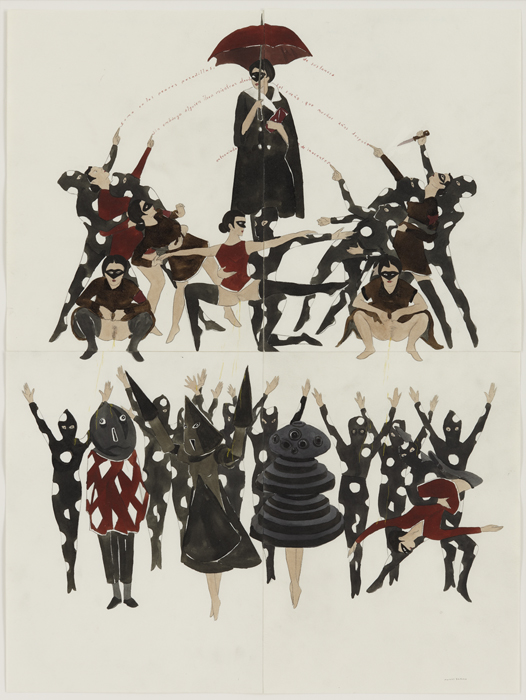 Your drawings express so much movement, even though the line is so clean, they're incredibly expressive.
Recently, the drawings have kind of begun to be like a climactic ending of a giant dance, like a grandiose Busby Berkeley scene.

Duchamp was a great chess player, I haven't asked you the significance of chess. Do you like to play chess? Do you enjoy the possibilities?
I'm not a strong player, but I enjoy it. My attention span was so short that I wanted to move at a slower pace. It was something that I went back to, because I used to play as a kid. A friend of mine in Guadalajara was a chess champion in California when he was thirteen, so he was re-teaching me.

Chess engages a certain part of your mind, because there are so many possibilities, as opposed to something that's very culturally specific, like a crossword puzzle.
Yeah because you can go in other directions. It's interesting to see Duchamp's patterns, he's actually an aggressive chess player. 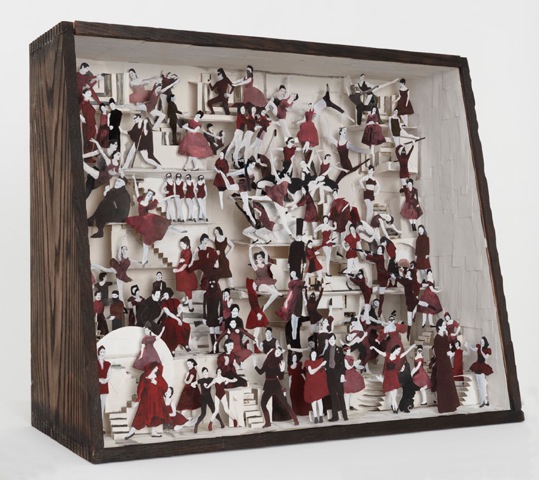 You've had a very private drawing practice for a long time, filmmaking is very different--do you like that collaborative process?
Yes, very much. I like switching it up. At some point if I'm just drawing all the time it becomes mundane, and then I'll work on some project like the film, and then when I go back to drawing it feels exciting again. It has an instant gratification compared to making a large film. But then the film itself has new challenges, and working with other people--the newness of it--makes it exciting.

When you're drawing you have total control of your universe, and here you've got an idea that you thought was clever and then somebody says it can't happen.
That happens a lot, especially budget-wise, it eliminates a lot of things.

Have you done animation?
I've done a few animations, like flipbook animation, and then I also did quite a few drawings that someone else filled in, they move the animation on a computer. That was really interesting to see. Other than that, I don't know if I'd want to do it, the flipbook was so exhausting, and the end result wasn't as exciting as I'd hoped.

Do you think your films are going to get longer and longer?
I was thinking about making a longer piece, maybe more of a plot and a story, instead of the more dyslexic direction in this film. 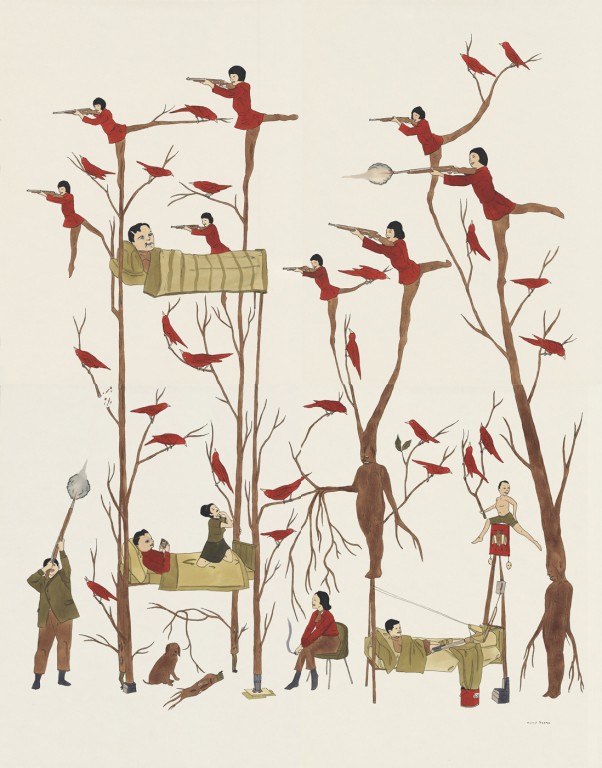 Sometimes artists say the viewer is thinking too hard and reading into the work too much. But in your case symbols have quite specific meaning.
That's right. For this show, most things relate to the chess game, and a rebellion, a rising up taking over whatever power was in place. There are two warring factors, and at the end none of them exist anymore, and the main character that was kidnapped is freed and she's the only survivor.

Looking at older work of yours, there's often a reaction against an unnamed power, or a masked figure. There's a conflict in a lot of your work.
There's an anti-authority thing going on, I'm not really sure what it is.

I was interested, because in an interview you talked about different faces asking the same question. You can look at different sets of characters in your work, but there's still a friction between something that's innocent and something that isn't.
In some of the drawings, some of the characters represent a fascist or repressive regime and others represent an underground movement. I don't know why they come in to play, sometimes I'll just start drawing and they develop as they go along. After I do enough of them I feel like there is a theme, and I'll play around with that, but I also leave enough clues unanswered so the viewer can add their own take to what's going on. 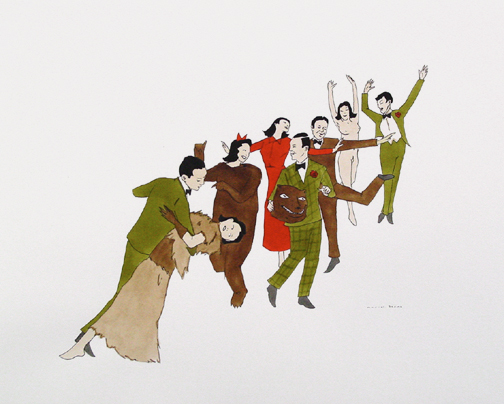 When you go back to the studio, do you just start and see what happens? Or do you usually have a very specific idea and say, ok, I'm in my nurse phase? How do you realize you've got your next theme?
I don't know, with this show I was starting to draw more modern, almost industrial looking shapes, almost like a mechanical play on a figure. But it would also interact with more figurative characters.

I read that you said you started drawing as therapy. Can you talk about how your drawing practices changed over the years, or if it's always just like keeping a diary, something you can always come back to?
When I was young, it was more like a sketchbook, it was very loose, but more about creating characters. At that age it was highly influenced by comic books--I'd make my own little comics, but also sketches of friends and it was really loose. I was also a songwriter, so I put lyrics in there.

And now as you're more in control, how have things changed?
In some ways it hasn't changed that much, because I still keep that style of sketchbook, but less time is spent on it, and the regular drawings have taken over. That was my schooling, learning how to draw, what was interesting to me, and keeping a recording of it.

You mentioned songwriting, and you've worked with Department of Eagles, what role does music play for you now?
Every now and then I like to take a break from the visual arts, and play a few songs on guitar. I don't play them for anyone. But when I was younger that was very interesting for me, because it was the very early nineties, the whole punk scene was coming up again in Canada, so that felt very interesting to just pick up an instrument and play it.

And as far as collaborating in general, that seems like something you're disposed to, since the days of Royal Art Lodge.
Yeah, I used to play music with all of them, we all had rotating bands and we all played in each others' bands. 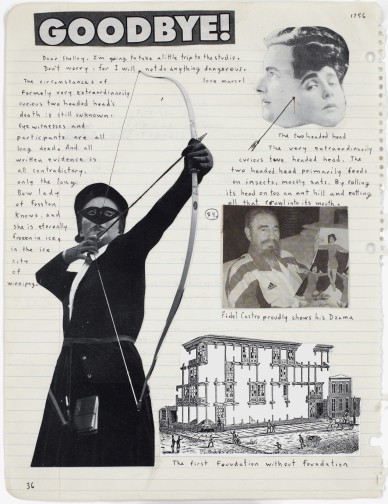 He's great. How do you respond to an artist like Jockum--do you see things and try to figure out how he did it?
I'm always interested in seeing how other artists work. I want to know what their working patterns are, I even like to know if they listen to music when they draw, or what time of day they draw, even materials they use, what they research, if they use photographs.

In your case, how closely are you dealing with source material, and how much are you working just from your own invention?
There was one photograph that I found of a Palestinian woman who hijacked some PanAm airplane in the seventies, I based an entire character on her in the film. I was flipping through this little book that had one image of her sitting on the side of a bed, with the gun, and she looked so lonely, but also interesting. The setup was a photo op, I don't know what it was from. I look at old mechanical magazines to see how certain objects were put together and built. And then of course you kind of add your own little touch, oh I'll add an arm here.

You've been in Mexico recently--do you travel a lot?
I've been to Mexico a lot. The last two shows at Zwirner, I spent a large portion of the time in Guadalajara, working with this friend of mine who has a ceramics foundry, Jose Noe Suro. He lets me have control of part of the factory. Having that freedom lets me make some large scale works, in my own studio, I usually work far smaller. 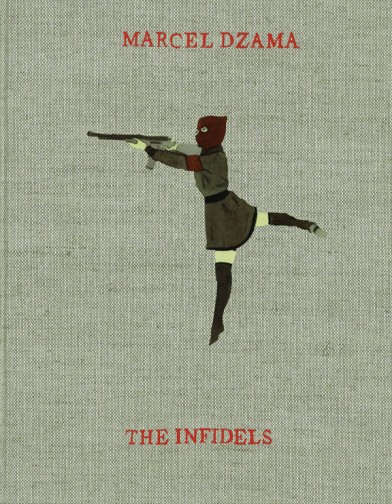 And do you like working away from New York, or do you prefer to be in the city?
For drawing, I like to be in New York in my home, but when it comes to working on larger projects, especially there, everything is possible. He has so many connections, you come up with an idea, and he'll say, yes, I know someone who bends tin, and can weld it together, you say oh, ok, that's great!

People like that are terrific--the person who you say something you know is silly and they can make it happen.
Right, in this film, I was talking about this idea of a chess game, very loosely, and three days later, he said, I have the Guadalajara ballet department ready for you.

When people recognize your interests, and associate you with a sensibility, do you react against that?
I guess if I see things written too often, in a review, I do rebel against that. But that helps you notice things you might not notice, and you think I should move on to something else. It's also friends who tell you that you should draw more bears, or something.

Right, and then sometimes a character goes away.
I killed off a lot of characters in the last show I had here. I decided I'd had enough of those guys. A couple of them have reappeared, but not very often.

Marcel Dzama: Behind Every Curtain is on view at David Zwirner until March 19.
The artist has a book signing at the gallery on March 5, 4-6pm.