Sometimes I feel like a foreigner in this fast eroding land. A stranger to the ranting and raving of politicians in the media. Someone out of tune with the daily goings on, where all is forgiven if you just make the statements. Statements like: "the left is supporting the Arabs to come out and vote in droves," or the statement that "there will never be a Palestinian state on my watch."

How is it possible to get away with these racist statements? To then deny their content and to try to placate ethnic groups with empty apologies? To then appear in every possible media outlet with a supercilious expression, "You see how I manipulate my people?" In any other civilized land, statements such as these would have repercussions and the leader would have to resign. Are we so bemused in our thinking that these declarations encourage us to go to the polls and vote for them? 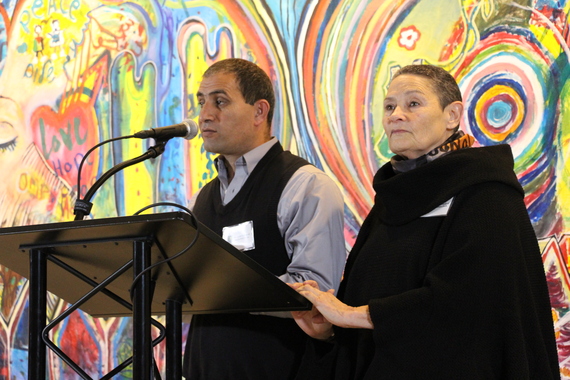 Tears of disappointment and disbelief at the results of the latest elections. A clear choice for what is morally wrong -- the occupation. A clear choice for would-be ministers, to build more settlements and to reduce the powers of the High Court, one of the last vestiges of democracy. Do things have to reach rock bottom before we will really call for change?

Now that the people have made their choice, the fear mongering continues; hardly a moment goes by without some doubtful expert, who was someone in the past, giving us a voice of doom and gloom. Iran is an ideal topic to force Israel to try to quell any attempt for a deal. What hope it there for a nation being given a daily dose of fear? Will they not react with fear, which leads to anger, which leads to violence?

I feel like an alien in a land where, for Palestinians and refugees, seeking asylum there is no freedom of movement. After all, this is a basic human right. Where my Palestinian partner, who also lost a child, is left hanging in the air before getting permission to fly through our airport to a conference on peace. After all, freedom of movement is a basic human right.

Where is the hope in all of this? I, for one, will never give up the fight for an end to the occupation, and end to racist statements, and an end to the violence and to continue the quest for reconciliation.

Over the past two weeks, I have been traveling all over the United States with a Palestinian partner, spreading the message of the Parents Circle -- Families Forum. It was an honor to open the J Street conference -- an opportunity to point out the consequences of the ongoing conflict. To speak in synagogues, universities and to an amazing group of women in Los Angeles at the Women in the World Summit.

More and more Americans are beginning to understand the consequences of the ongoing situation here. At the United Nations, we showcased our Peace Square mural, which was created during the war in the West Bank and Israel, at the United Nations, and we were greeted with much praise for the Parents Circle by the Deputy Secretary General. All of this energizes us to go on with the work, regardless, and to affect the situation and not let it affect us.

Our work now in Israel and Palestine is cut out. We will continue to push forward a framework for reconciliation to become an integral part of any future peace process. We cannot afford to give up. Now, more than ever, we need to dedicate ourselves to change, to reach out to communities out of the Tel Aviv bubble, and to show people an alternative to the violence.

Thousands of people came out at the demonstration in Tel-Aviv, which created a temporary high, but also showed that there is a beginning for a movement in a different direction. Apathy is not an option. The future of our children and grandchildren, and indeed of Israel and Palestine, will depend on those people willing to work for change.

Next week, I will be traveling with Bushra Awad, who lost her son. We will be going to the Women in the World Summit in New York. This is an opportunity once again to spread our message to a prestigious group of women, and to ask them not to be pro-Israeli or pro-Palestinian, but rather to be part of the solution. Otherwise, they are importing our conflict into their country and creating hatred between Jews and Muslims.