Like many multigenerational families of American Jews, my parents conversed with my grandparents in Yiddish rather than English. I have friends whose second family language was Armenian.

One of the joys of living in San Francisco is the huge variety of speech we hear in public. When a diverse population faces off with tourists from around the world, the language stew becomes extra spicy.

Last year I was riding a MUNI bus when a cranky old white man turned to two middle-aged Asian women engaged in a heated discussion and screamed "This is America, goddamit. Speak English!"

His failure to understand that their conversation was none of his business was every bit as pathetic as his inability to grasp that, whether these people had been born here or arrived as immigrants, they were probably citizens of the United States of America. Just like him.

As I move about San Francisco I'm always fascinated by the mix of languages I hear. On any given day (or transit route) it may range from Spanish, Arabic, and Portuguese to Russian, Japanese, Thai, and a variety of Chinese dialects. On Thanksgiving, when I went back to Cirque du Soleil for a second viewing of Totem, there were numerous tourists speaking French, Italian, and German. Seated behind me was a large family speaking in either Tongan, Samoan, or Hawaiian.

Is my exposure to San Francisco's polyglot population the reason I wasn't the least bit threatened by words I could not understand? Or have my years of watching foreign films and attending opera performed in foreign languages inured me to the strange sounds of an alien vocabulary?

No one could fake their way through a foreign language like Sid Caesar. In the following video clip from the 1991 Chabad Telethon, Caesar demonstrates his versatility with doubletalk in multiple languages.

One of Denmark's great artists, comedian Victor Borge, perfected a form of phonetic punctuation, which he shared with Dean Martin in the following video clip:

When I traveled to Denmark in 1987, I had been assured that most Danes spoke English and that I would have no problems getting around. Two memories stick in my mind from that trip: 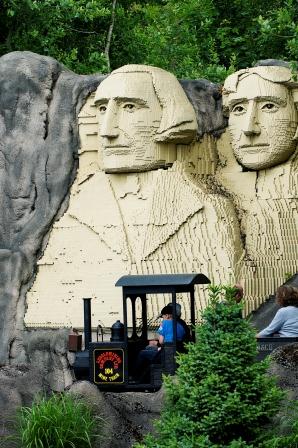 The Danish version of Mount Rushmore in Legoland-Billund: Photo courtesy of Legoland

Anyone who has traveled to foreign countries where English is not the dominant language has experienced moments of anxiety as they realize that signs are written in a foreign alphabet or that their attempts to learn a foreign language allowed them to speak at a much slower and more methodical pace than that of standard conversation.

Last month I attended the West Coast premiere of a new play by Anne Washburn presented by a regional theatre company that was new to me. Even if The Internationalist occasionally proved to be incomprehensible, it was a perfect match for this company, whose mission statements stresses that:

Just Theatre provides an artistic home to theatrically adventurous voices addressing morally complex questions. We present new work that is smart, funny, and weird with complex narratives, distinctive use of language, and big ideas. We seek out plays and playwrights pushing the boundaries of structure and form, developing new plays by local playwrights and introducing compelling new voices to Bay Area audiences.

The setup is simple. An American employee of a multinational corporation is met by one of his foreign colleagues at the airport of an Eastern European city when he arrives, exhausted, from Istanbul. With his departure from Ataturk International Airport having been delayed by nearly seven hours, it doesn't really matter if Lowell (Nick Sholley) was flying on Turkish Airlines (whose hub is at Istanbul) or an American carrier with a code-sharing agreement.

Sara (Alexandra Creighton) is pretty, speaks fluent English, and has gone above and beyond the call of duty to greet him upon his arrival. What follows is a wealth of misassumptions based on poor communication, cultural clumsiness, and Lowell's debilitating jet lag.

At first, it seems to Lowell that things are going exceedingly well. On his first night in a strange city he's met a pretty woman, gotten laid, and is ready to make his debut at his company's regional sales office. 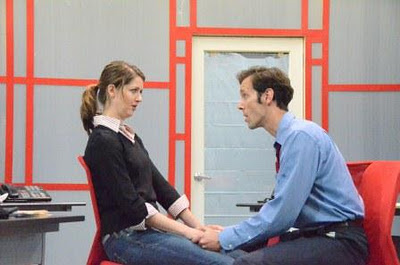 He soon discovers that in his eagerness to tip the appropriate amount, he may have insulted Sara by treating her as if she were a prostitute. The next morning, as he listens to the office staff's routine conversation, it soon becomes obvious that Lowell is completely out of his element.

The behavioral nuances of office workplace rivalries translate easily enough but, even after witnessing some heated exchanges, Lowell simply cannot figure out what people are saying. Without Sara around to help him, he stands by helplessly as James (Kalli Jonsson) says:

In her production notes, Washburn writes:

As The Internationalist progresses, Lowell slowly comes to realize that: 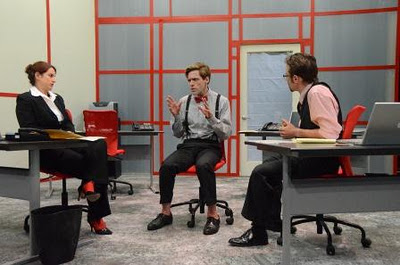 As directed by Jonathan Spector, The Internationalist presents some stiff challenges:

While the playwright has an interesting point to make, The Internationalist demands a tremendous amount of work for a very limited return on investment. This clip from a production of The Internationalist by the Available Light Theatre offers a brief sample of what the play sounds like.