The scenes on Wednesday, all broadcast live, were unimaginable in an even fourth-world country.

From the early hours on, a large police force, including plainclothes officers, assembled at the gates of the headquarters of Bugün and Kanalturk TV and two dailies -- Bugün and Millet -- which belong to Koza İpek Holding. Inside, a large group of journalists, lawyers and four deputies from main opposition Republican People's Party (CHP) stood in line and held the gates.
The raid was about a seizure of those media outlets. 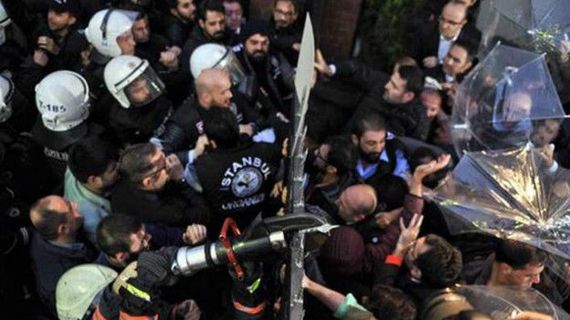 In fact, it was a minor coup attempt, a sort of "dress rehearsal" for a major coup, being televised. The gates were crashed down, while clashes between the police, journalists and people in support of their media outlets led to tear gas, violence and arrests.

Later, those who watched Kanalturk and Bugün TV live became witnesses to an historic, ugly, horrific event. The trustees, who were selected carefully on the basis of how close they are to the ruling Justice and Development Party (AKP) and appointed by the court, entered the building under a very tense police escort.

Under the normal circumstances of a takeover, they would have been given time to run the company. Yet, immediately, they ordered, with no clear jurisdiction to do so, to black out the live broadcast of the channels. From that moment on, the drama escalated: Current Editor-in-Chief of the TV channels Tarık Toros intervened while some men at the main control room tried to cut the broadcast. After a long battle of words, the men were chased out, and, as one camera after the other went black, the broadcast went on in the tiny control room, with journalists, deputies and phone-ins, reporting and commenting on the seizure.

This was Turkey on Oct. 28, 2015, just days before a make-or-break election, which turned into a stage for an immense battle for its future as a democracy -- or the opposite.

In many ways, for those of us who follow this extremely tense story of the country, hour by hour, the unlawful seizure came as no surprise, but only as a bigger stepping stone laid on the path to sheer fascism. Koza İpek Holding, along with Doğan, has -- or had -- the last remaining independent and critical television channels, a medium seen as the defining tool for opinion-shaping for voters, more than 85 percent of whom get their news and commentary from.

Drama escalated further the following day: when the trustee and his team assembled the staff at a a newsroom meeting with police officers present, tension rose rapidly, and several editors and reporters who fiercely defended their editorial independence were, after being openly humiliated by the trustee, manhandled by the police and thrown out of the building.

As the seizure a day before was televised live, so was this meeting secretly filmed, and the video with caps in English can be watched here.

The seizure of the Koza İpek companies, let's make no mistake about it, had simply one target: to take over its media and transform the outlets into pro-government propaganda tools, by way of "influencing" the trustees, one of whom is reported to be a relative of the first lady and another, a top manager of the fiercely pro-Recep Tayyip Erdoğan daily Sabah.

The seizure, no doubt, is a new episode of what I call a "slow-motion power grab" by President Erdoğan. It escalated with a police raid to Koza İpek headquarters in July, followed by two mob attacks on the Hürriyet daily building, the confiscation of Nokta weekly for its cover depicting a smiling Erdoğan taking a selfie in front of the coffins of soldiers killed in the conflict with the Kurdistan Workers' Party (PKK) and seven critical TV channels taken out of a digital platform and satellite.

The recent days saw further drama: Chairman of the Diyarbakır Bar Association Tahir Elçi was charged with up to seven-and-a-half years of prison for expressing that "the PKK is not a terror organisation"; and 144 people arrested in Gezi demonstrations, including several doctors who helped the wounded in street clashes, were sentenced to prison for disturbing the order and "desecration of sacred mosques."

No wonder that all those voters who disagree with the AKP's policies perceive all these developments with horror and as a way to seize power -- for good.

Readers who follow my column are well-informed about the demise of the media in Turkey, which I have covered extensively.

We are now in the final stages of its last breath. The pressure is unbearable as the opposition parties lose access to four more critical outlets, as hundreds more decent journalists risk losing their jobs and the remnants of a tiny independent media are more vulnerable than ever.

I also notice that particularly the EU turns a blind eye to the "rape" of journalism, unaware or negligent that its collapse will mean the end of all the dreams of Turkish citizens, for democracy, with it. What a shame.