The Earth is a self-contained system in which all elements interact in ways that we humans simply do not understand--witness the life and death of the Biosphere Project, the Acts of God caused by our own insensitive paving over of the Earth, or The Next Catastrophe that lurks across America, not from terrorism, but from industrial irresponsibility with respect to chlorine and other toxic elements.

Prior centuries have seen entire civilizations intuit both how to live sustainably within the Earth's natural parameters; and future crises such as the Year 2012 as one of convergence, emergence, and possible disaster. I believe 2012 will be a tipping point year for the good of humanity.

Although the 1970's saw many great minds flourish, including Buckminster Fuller, Russell Ackoff, Richard Falk, Jorgen Randers, and Dennis-Donella Meadows, that generation of scholarship was dismissed by those in power. It was during this period that infectious disease, peak oil and scarce clean water were all identified as threats of a global nature in the future.

Experts could be ignored then because the public was ill-informed and inattentive. Today Participatory Budgeting, Participatory Medicine and even Open Everything are all coming into vogue. The Internet severely undermines Rule by Secrecy BUT we are lacking one big thing: public intelligence in the public interest. A Virtual Cabinet without Virtual Intelligence is nothing more than ku-ba-ya writ large. To be effective, the public must be informed and must be able to think analytically about true costs and about trade-offs over time and space. Decision-support (intelligence) is ESSENTIAL to creating a prosperous world at peace, beginning right here in the USA which has been so badly mis-managed as to justify impeachment of every incumbent within both parties.

A Strategic Analytic Model is the non-negotiable first step in creating Strategic Intelligence, and cascades down to also enable Operational, Tactical, and Technical Intelligence.

The most relevant strategic analytic model to our purposes (creating a prosperous world at peace) is the one inspired by the United Nations High Level Panel on Threats, Challenges, and Change. Their report, A More Secure World-Our Shared Responsibility-Report of the Secretary-General's High-level Panel on Threats, Challenges and Change, provides for the first time ever a prioritized list of the top ten high-level threats to humanity.

That list, in that priority, comprises the vertical aspect of the Strategic Analytic Model.

The following quote from Senator Sam Nunn (D-GA), now retired but then the Chairman of the Senate Armed Services Committee (SASC), is instructive:

I am constantly being asked for a bottom-line defense number. I don't know of any logical way to arrive at such a figure without analyzing the threat; without determining what changes in our strategy should be made in light of the changes in the threat; and then determining what force structure and weapons program we need to carry out this revised strategy.

As the matrix below will illustrate, in relation to the ten high-level threats now agreed upon by most Nations, Terrorism and Proliferation, the two that ostensibly guide existing U.S. defense "strategy," are numbers nine and eight respectively. The U.S. Government is so far removed from reality as to warrant deep contemplation of the possibility that it is our major problem, and not a solution to anything of substance.

First however, let us contemplate "Whole of Government" as the container for the varied "Instruments of National Power." One short-hand approach popular in the War Colleges is the concept of DIME: Diplomatic, Informational, Military, and Economic. By no means comprehensive, this avoids a proper appreciation of both domestic constraints and needs on foreign and national security policy, and prevents consideration of both nuances, and non-state threats as well as natural threats and the "true costs" of bad policies (e.g. bad policies on Agriculture or Energy destroying what little clean water we have left).

Earth Intelligence Network (EIN), the 501c3 Public Charity that sponsors Phi Beta Iota, the Public Intelligence Blog, conducted a study of Mandate for Change books published by the transition teams for the varied finalists for President of the USA over the past 20 years, and identified twelve core policy areas that must be managed in harmony with one another in the context of a balanced budget, if one is to be effective in satisfying public interest expectations for both peace and prosperity. They comprise the horizontal axis of the Strategic Analytic Model, as shown below. 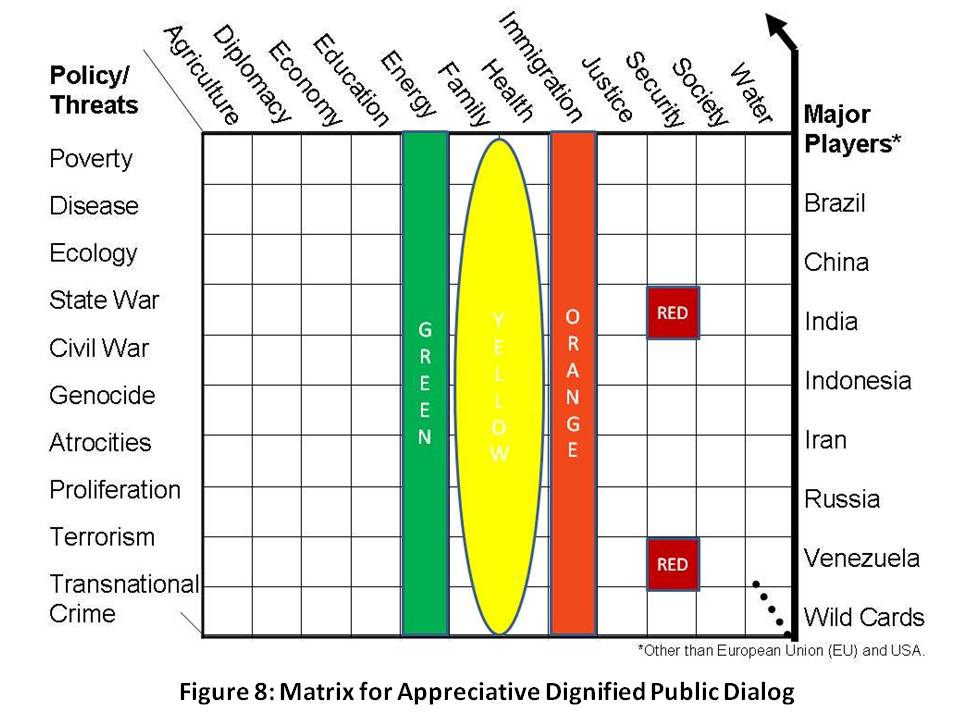 Not yet discussed are the eight demographic challenges that will assuredly determine the future of the Earth and of Humanity. NOTHING the Western powers do in the next twenty years will matter at all, with ONE exception: they can come together with African, Americas, and Asian nations and agree that the one inexhaustible resource we have on this planet is the human brain, and that the quickest way to create infinite stabilizing wealth is by a combination of empowering each of the five billion poor with free cell phone service for at least 3 years; by providing call centers able to educate and inform the poor "one cell call at a time" in each of the 183 core languages using millions of volunteers worldwide; and finally, by sponsoring a totally transparent Open Source World Brain with an embedded EarthGame that connects all human minds with all information in all languages all the time.

All or Nothing Analysis

Bureaucracies do "stove-pipe" analysis. A crippling fact about the U.S. intelligence and defense communities is that they are coming off what one author calls a Fifty Year Wound in which "government specifications cost-plus engineering" has been justified by fraudulent threat studies, and completely disconnected from reality (for example, building 50-70 ton systems when most of the world has 10-30 ton bridge limits). At the strategic level, and remembering the importance of costing out options across all the policy spending areas and in the context of a balanced budget, it has to be all or nothing. Every threat and every policy must be evaluated in relation to all the other threats and policies. Anything less is not strategic. Not only does the US Intelligence Community not do this, but they are wasting $75 billion (going on toward $90 billion) a year producing "at best" 4% of what the President or a major government leader needs, and nothing for everyone else. This is one reason an Open Source Agency and a nation-wide practice of public intelligence in the public interest is so vital. 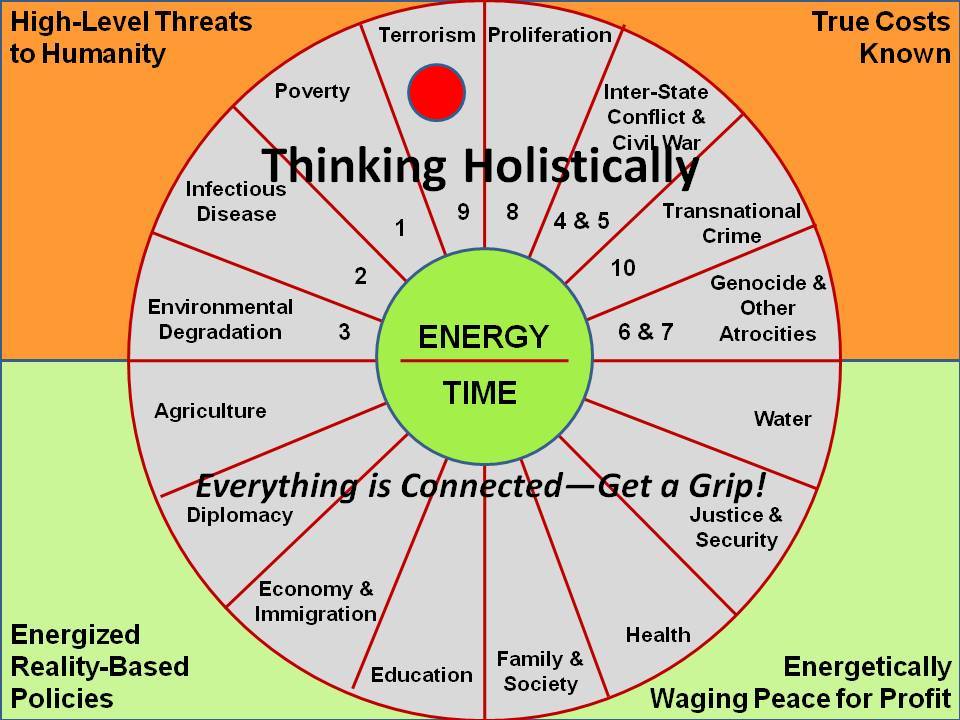 The key point here is that in Whole Systems analysis and remediation it is IMPOSSIBLE to be successful if you allow Departments and Agencies to do stove-piped analysis and stove-piped programming and budgeting. This is why the Office of Management and Budget (OMB) abdication of the "M" and its refusal to demand proper intelligence support for ALL elements of the government (not just the policy level but to the action officer level) makes OMB the most ineffective part of the Executive Office of the President (EOP) in relation to its actual mission and its national and global potential.
This is the analytic model that will be used from this point forward for two vital purposes:

2. Nurture Participatory Budgeting, Participatory Democracy, and Participatory Veto by connecting very eligible voter and all others to all relevant information online, where deliberative dialog can take place to produce accountability through transparency.

I will end by pointing out that Medard Gabel, #2 to Buckminster Fuller in creating the analog World Game and now the designer of the EarthGame(TM) and Earth Dashboard, both uniquely his in design, has rigorously researched the cost of war versus the cost of peace and the bottom line is clear: we spend $1.3 trillion a year on war, when we could eradicate all ten high-level threats to humanity, both here at home where poverty and disease have surged under this Administration, and around the world. His chart, his property is shown below with permission. Find him at BigPictureSmallWorld. 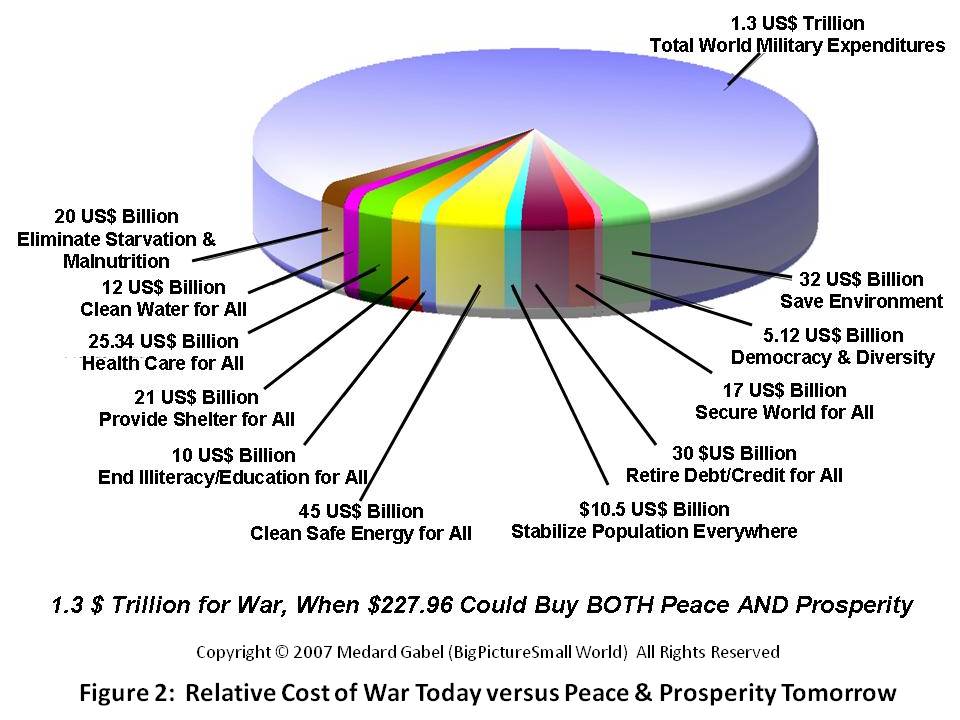 He is one of our most precious national resources. Why is it that this master of serious games, this architect of a whole systems game that could be created at a cost of less than $3 million a year, is not employed to do precisely that? Who benefits? Not the public. And that is why we all need to rally ourselves to action and engagement. Sanity is nice, intelligence is better. Et tu, Colbert? See you on the Mall.

2009 Perhaps We Should Have Shouted: A Twenty-Year Retrospective

1998 JFQ The Asymmetric Threat: Listening to the Debate

Next Thursday: What's Right with America? Let Me List the Books