Listen in to this companion podcast with Alan Kelly on SiriusXM POTUS.

While Jeb Bush dithers, there's much to be said about his opponents' slogans. What's escaped the white gloves of so many branding gurus is an analysis of the influence plays that support them. They tell a deeper story of the candidate's intentions and interests. Here are seven to consider, listed in alphabetical order: 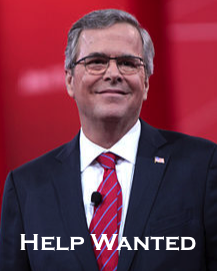 Hillary Clinton: "It's Your Time." Unclear is as unclear does. Clinton's tag betrays the vagueness of her campaign. Perhaps it's a placeholder for something more powerful because it summons in voters little more than self-awareness. What play is Hillary running? I have no idea, nor I think does she.

Ted Cruz: "Courageous Conservatives: Reigniting the Promise of America." The Texas senator starts with a Label, what we sometimes call a self-Label, because Cruz will happily tell you he's courageous. The slogan also features a Screen on the American dream, perhaps also on Ronald Reagan's Morning-In-America refrain. Cruz is telling us that what we had is what can be recovered. Contrasted to Marco Rubio (see below), it's nostalgic and form-fit to his senior-voter base.

Carly Fiorina: "New Possibilities. Real Leadership." Fiorina's tag is a weak Trial Balloon with shades of a Call Out on the sitting president and Hillary Clinton as her foil and gender-counterpart. Given her rocky ride at HP, the claim of "real" leadership is arguably a Trump to preempt the critics of her failed CEOship.

Mike Huckabee: "From Hope To Higher Ground." This is classic Huckabee. Entertaining, always, but often at the expense of education. The play is part Label given the alliteration. And it tells the story that, like Bill Clinton, he's also from Hope, AR. While the slogan takes some thinking, what the former governor figures he really wants to say is that he's better. Higher ground is higher than just high ground. It's even higher than hope! Therein lies a subtle Screen since hope is a central value of the religious right on whom his candidacy relies.

Rand Paul: "Defeat The Washington Machine. Unleash The American Dream." This is a veiled Call Out on establishment politics and another Screen on the American dream. Team it with Bernie Sanders' line (see below) and we've got a full blown palace coup.

Marco Rubio: "A New American Century." At first blush, the young senator's play is a no-spin Fiat and, as such, relatively nondescript. But it contains a veiled Screen on youth and a Call Out on his aging rival, Bush, and later, he hopes, Clinton.

Bernie Sanders: "A Political Revolution is Coming." The socialist-democrat is running a less than subtle Ping, all to signal something inevitable or, depending on your politics, something foreboding. Listen to Bernie and you'll hear his real cry: to rise up against the oligarchy and plutocrats. But who knows what those are? Sanders and Paul are the most provocative by far.

Before The Great Shakeout, there will be more. In any case, by exploring the strategies beneath the slogans, we know more about the politicos and the plays they're running.