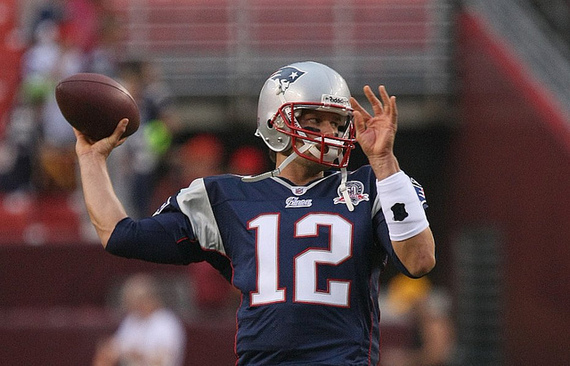 Photo Credit: Keith Allison
A lot has gone on with the "Deflategate" story since my last post. Tom Brady lost his appeal with commissioner Roger Goodell, and has taken his case to federal court. The NFLPA brought the case to Minnesota, where they have had previous success. The court in Minnesota ordered the case back to New York, where there have been settlement conferences and hearings.

That is where we stand. The case doesn't appear to be closer to a settlement, and the judge will be rendering a verdict prior to week one. Both sides agreed that a quick verdict is necessary.

After one hearing, the judge poked holes in both the NFL's side, and Tom Brady's side. The idea was to get them talking settlement, because either side could lose. Both sides do have problems.

The purpose of this post is not to argue either side, so Patriots fans, please read the whole thing before you come looking for me.

The goal here is to give the best strategy for Tom Brady to win and be exonerated. There are two key points he and his team need to key on. If they do, he should win easily.

First of all, don't get into an argument about the science. That will turn into an expert vs. expert debate, and the judge won't hear it.

The NFL made two important concessions that the Tom Brady camp must harp on. The first is a concession from Brady's appeal hearing. Here is the first one:

"Where do you find the policy that says footballs can't be altered with respect to pressure? Is that going to be in the competitive integrity policy that Mr. Wells cited in his report?" attorney Jeffrey Kessler asked Vincent.

This is a huge concession. Tom Brady was disciplined under a rule that the players aren't even aware of. Kessler and company must hammer this home. It is unfair, and really unreasonable, to hold someone responsible for something that they have conceded, is not known by the players as a violation.

The second is the admission in last week's hearing. The NFL admitted that they had no direct evidence to implicate Tom and him having knowledge of a conspiracy to deflate the footballs. Kessler should repeat that over and over again. "There is no direct evidence." That's a fact that is hard for the judge to ignore.

If he hammers home these two points, Tom Brady should be exonerated rather easily. If he makes it too complicated, I believe we will not see Tom Brady when the Patriots take on the Steelers in week one.