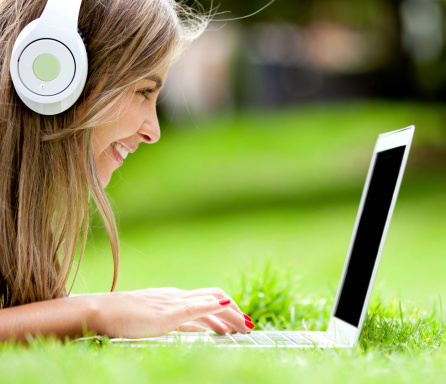 Photo Courtesy of andresrimaging via iStock

If you wanted to listen to a certain song just 30 years ago, you had two options: You could buy the physical album, or you could spend an afternoon waiting for the song to come on the radio so you could record it on a cassette tape in your boom box.

Now, almost any song is just a click away. First, there were on-demand services such as Napster, then came the iPod and other portable MP3 players. Today, millions of people sign up for streaming services such as Pandora, Spotify, and Google Play Music for a nearly unlimited supply of music.

Listeners now control the entire experience. We can listen to our favorite artists or songs at any time and on any device. Streaming has even made the listening experience social. Services such as Spotify are integrated with Facebook, allowing listeners to see what their friends are listening to in real time, making it easy to discover new music.

But what's next for the listening experience? For now, streaming music services are going strong, but the future of music -- streaming and beyond -- will likely be heavily influenced by the company that has already remade the music industry: Apple.

Apple's New Streaming Service Will Start With a Lead

During my 10-plus years leading music and entertainment initiatives at Apple, I helped set the company on a course to become an innovator in the way artists create, market, and distribute music. Back then, the effort revolved around the Macintosh and Pro Tools, leading into the digital revolution. Then, Apple created the iPod and iTunes to move the music industry beyond the analog era, and the rest is (well-documented) history.

Apple has retained its focus on music to this day, so it's no surprise that it will continue to play a key role in determining the future of the listening experience. Its latest effort began last year when the company bought Beats Electronics and Beats Music for $3 billion. At the time, I predicted the acquisition might be the company's smartest move yet, and if recent reports can be trusted, it appears this will prove correct.

The first fruits of the Apple-Beats collaboration are likely to arrive this year, according to 9to5Mac, which reported in February that Apple was working on a new paid streaming music service based on Beats' technologies and music content integrated into the iTunes service.

The service reportedly will cost $7.99 per month -- which is $2 cheaper than rivals such as Spotify and Google Play Music -- and will be integrated into iTunes and the default Music app on iOS.

The lower price tag is a clear advantage, but beyond that, the service would launch with a huge potential customer base. By integrating the new service into iOS, iTunes, and Apple TV, Apple will reach all of its hundreds of millions of customers in addition to existing subscribers to the Beats Music streaming service.

Apple is also reportedly revamping the Beats Music Android application, so it, too, will attract customers who use the mobile operating system with the largest global market share.

Combine Apple's price advantage, its marketing prowess, and its unsurpassed market penetration with its history as a music innovator, and you have a solid foundation for streaming success.

Although Apple is set to launch a streaming service that could quickly become an industry leader, the company isn't content to stop there. Apple knows that customers crave a unique experience that combines the best of streaming and physical CDs, and it's working on a product to meet that demand.

Apple and U2 have been collaborating on a secret interactive digital music experience -- something so unique and engaging that it could tempt music fans into buying whole albums again. According to Bono, this new audiovisual format can't be pirated and will bring back album artwork while giving fans a behind-the-songs experience.

Fans always want to be closer to their favorite artists. During my time at Apple, my friend Ty Roberts of Gracenote created the technology behind the enhanced CD, which offered an immersive listening experience and helped to usher in the digital music revolution.

Today, Apple and U2 appear poised to bring a next-generation version of that concept to the digital world, while helping artists protect their rights and income.

Streaming music as it exists today probably isn't the final destination for music because we crave something more -- a richer experience that combines what we miss with what's still to come. Just as it did with the iPod and iTunes, Apple will create the next listening experience that will help us delve deeper into our favorite tracks and get closer to our favorite artists.

Kelli Richards is the CEO of The All Access Group. She facilitates strategic business opportunities in digital distribution among innovative technology companies, talent and media companies, and brands to foster new revenue streams and deliver compelling consumer experiences. As a trusted advisor, she transforms the quality of people's lives. Kelli is also the author of a bestselling e-book, "The Magic and Moxie of Apple: An Insider's View."