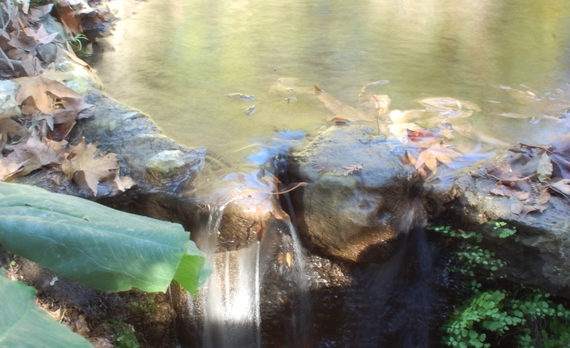 Hopper will always have a place in my heart. He was my first pet that wasn't a dog or cat. I was eight years old and had freshly scooped him out of a creek near a friend's house. He was just a tadpole then, scurrying around shallow pools with other brown polliwogs. After acquiring a small aquarium, I nurtured Hopper into full froghood. The most gratifying part of the whole experience was that no pet stores or negotiations with Mom or Dad were involved. This pet was brought into my world with my own hands from the terrain under my feet.

Like me, Hopper was born in the teeming metropolis of Los Angeles. Hopper's larval stages were spent in a perennial stream at the northern end of Beverly Drive. With so much attention given to restoring the Los Angeles River these days, we tend to forget that the city has dozens of streams - some free-flowing, others entombed - coursing through it. As one would expect, the Santa Monica Mountains contain the majority of them. North-south canyons like Coldwater and Laurel used to provide fresh flowing water to Tongva inhabitants. Though the main waterways have been lost to development, you can still see evidence of the tributaries that once fed them. Like the one alongside Cherokee Lane, where another childhood pal lived. The driveways of Cherokee's houses span a babbling brook that disappears under Coldwater Canyon Drive. Laurel Canyon used to have so many springs, house foundations were built out of the river rock. Despite record dryness, many of the canyon's rivulets are stubbornly hanging around. "Natural running spring" and "bridges" are key selling points for many realtors listing homes in the area north of Mulholland Drive.

L.A.'s creeks can just as easily be found in the flats. University High School in West Los Angeles is home to Serra Springs. In the 1970s, I was enrolled in a summer camp on campus, where our favorite activity was racing empty milk containers down its little waterfalls, unwittingly trashing a 2,500-year-old sacred waterway. Though most of our city streams live more secretive lives, their presence is often betrayed by rows of mature native trees popping up in random places. One of the longest is known as Arroyo de los Jardines, a largely subterranean stream that comes fully into view in the mid-city area. This arroyo has expensive taste. After basking in the verdant links of the Wilshire Country Club, it luxuriates in the leafy backyards of Brookside. But like an intrepid paparazzo, you can catch glimpses of it if you know where to look. It's clearly visible through the country club's fence along West 3rd Street at Hudson Avenue; farther south, it peeks through the trees flanking mansions on the north and south side of West 8th Street where it intersects Longwood Avenue.

In a city notoriously lacking green spaces, it's a shame that so many of our streams are cordoned off from the public. Should it be this difficult to find riparian refuges? County officials seem to be taking the question seriously. In the last few years, $11 million dollars have been spent to restore two waterways alone, at North Atwater Park and along the Tujunga Wash. Other, more modest restorations are also underway.

Hopefully L.A.'s water network has a happier ending than Hopper's. A few months into his boring, uneventful existence, the small frog escaped his glass bowl after someone left the screen off the top. Like a cartoon character flattened by a street paver, I found a green outline of his body on the floor. I suspected Dad, oblivious in his hard-sole loafers. But the amphibian's demise didn't discourage me from seeking more tadpoles at another nearby creek. That one is now buried under the gated, billionaire compound known as Beverly Park.

We can't turn back the clock on progress, but we've proven that restoring old streams is possible. We should insist that any future housing projects over existing aquifers allow for some form of public access, much like we already do with our beaches. It would be a shame if future generations of Angelenos are never allowed to discover their own patch of watery wilderness.