After fighting off conservative censorship, a 26-illustrator show opens in a new location four months late; "For Adults Only."

A French street artist who goes by the name of Titi From Paris has just completed a new plastering of texts and flying pigs to protest a feeling of encroaching censorship in Amiens, a northern French city of 160,000. 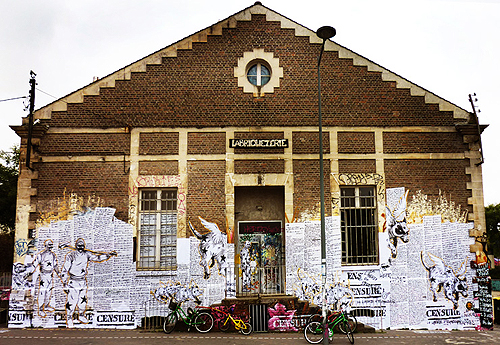 Censorship is sometimes traced back to the Enlightenment, but really the term 'censor' goes back to much older Rome, where a censor was a certain high ranking magistrate who was responsible for supervising public morality. Awarding that kind of role to someone is always a bit tricky. Our holy buddies in the Roman Catholic Church didn't make such a bright call during the Enlightenment with Galileo, who was famously censored for his absurd and true theories concerning the movements of the Earth.

Today, during our time of Endarkenment and of yelling television, we are more often dissuaded from unpalatable truths by clever cluttering, cantankerous clouding and confusing clatter. 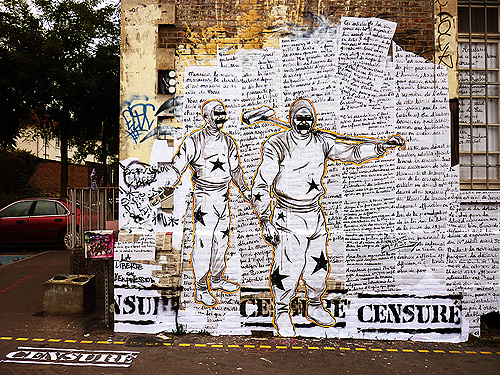 As reported in Le Monde and L'Observatoire de la censure, cultural conservative Christian Manable, President of the General Council of the Somme, vetoed the show (Pour Adultes Seulement) two weeks before it's debut in May because he found certain of the pieces to be degrading to women and therefore a misuse of public funds. The show of sixty drawings, paintings, and prints by twenty-six international artists, including Tomi Ungerer, André François, Jean Claverie, and Nicole Claveloux was effectively closed by the outcry. Luckily, the curator Janine Kotwica fought for the show to be re-presented and it has just opened October 14th after a large public and legal fight over whether some of the pieces were degrading, misogynist, or otherwise unsuitable for public funding.

Street artist Titi From Paris has just installed a large piece addressing the topic of censorship in general and a perception that this sort of thing is happening too often for comfort. Depicting clown-like men with whitewash brushes, winged pigs and similarly snouted animals flying over long texts decrying the idiocy of censorship, you get the idea that the censors have been subject of rather acidic critique recently. This street piece itself has stood untouched so the passing public appears to be in agreement in the assessment. 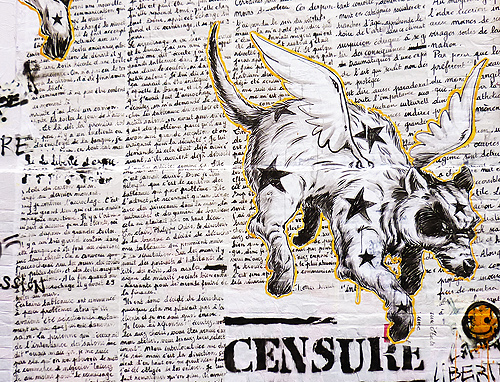 The richest irony of course is that the show is drawing so many new eyeballs than it ever could have without the benefit of an additional 4 months of publicity. On top of it, admission is free and is open to the public until November 5. 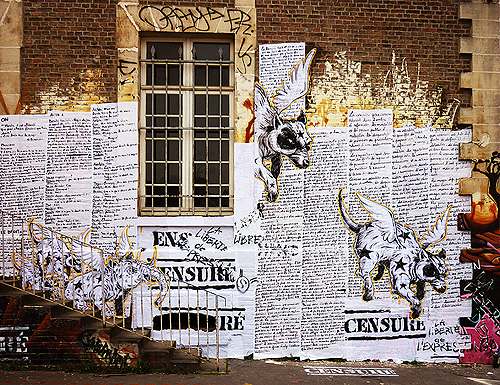 All images © Titi From Paris

A similar version of this article was published at Brooklyn Street Art.