Will you be caught holding the street art bag?

The euphoria, the rush, the excitement... it seemed so unique, so real, so important, so art historical... until it suddenly felt familiar. Too familiar.

When I heard about the investment banker types being led on tours of L.A. MOCA's Art in the Streets show I wondered: How many rich folks will back a street art gallery to acquire deep inventory and never see their money again? How many investment-industry types will be seduced by the glamour of Street Art hype and think they can corner the market? Will they all actually attempt to apply their stupid market metrics to art? None of them will look beyond the glamour of the MOCA seal of approval and ask whether the history books will really be kind to something so prone to trendiness as all this Johnny Come Lately Street Art junk.

MOCA delivers the "Wow" factor, but history shows that the hype can never permanently sustain Street Art and art styles like it that are fundamentally so easy to imitate that there is no inherent investment value in any of it.

Everything marketing manager Roger Gastman touches is turning into gold these days. A lot of it his own gold, of course. And that will continue, feel free to invest in one of his "can't miss" prospects, it will all go up in value, your money, up up up, golden, solid, until the minute it turns into shit. And then everything Gastman touches will all turn into shit, and if you bought that umpteenth Shepard Fairey print from a large edition, you will get caught holding the bag. And it is not just the Obey machine that is on a crash course with history. 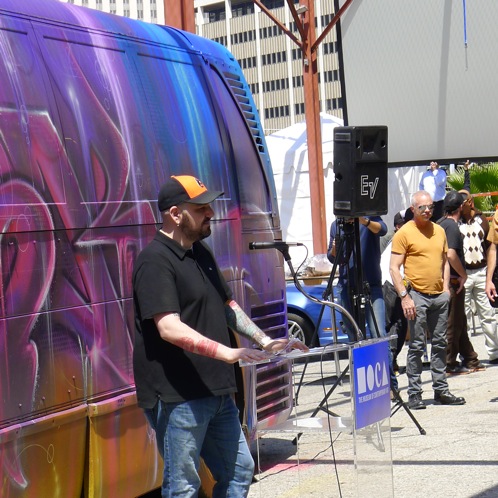 Corporate Branding Consultant Roger Gastman addresses the media at the Art in the Streets Preview.

But let's have a little history lesson, shall we?

Thirty years ago, the people's art was triumphing and the rarefied, elite art world had met its match. The new art was a pure art, no bullshit, it was big and bold and it ignored academic dialogue and theoretical dissertations. It was raw, it was real, it was a movement with many players who brought in diverse influences to create distinct signature styles all under the banner of... hey sounds like Street Art, right? well, back then they called it Neo-Expressionism, and it was authentic as hell. 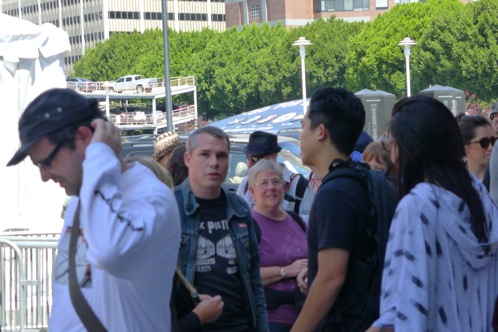 Would a market correction cause Shepard Fairey's prices to fall?

Suddenly the art market was reborn after a decade of conceptualist conceit had neutered every dollar down to a dull Bruce Nauman neon wall socket light fixture plug. In fact, "plugged-up" doesn't even begin to describe how constipated the art world was. The floodgates of creative excitement that opened with the arrival of Neo-Expressionism ruined the dominance of conceptualism, minimalism and abstraction in much the same way that a decade later the Berlin Wall's crumbling would snuff out Soviet ascendancy. And as the new players in the art world changed the rules and replaced the old guard, the money and museum seal of approval emboldened them. Everyone was comfortable and everything they touched turned to gold. Up up up it went in value, and that was solid gold, right up until the minute it turned into shit. And unless you were holding major works, you lost your ass. Major works are not prints. Major works are not graphic ephemera, drawings, one-offs or collaborations. When the Neo-Expressionism bubble burst it took a couple of thousand art careers and tens of millions of dollars with it. The art world contracted for about nine years. 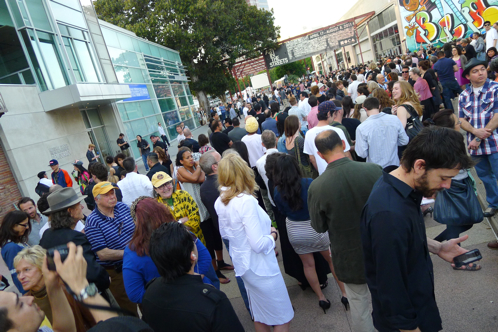 The opening night crowd outside the museum, awaiting entry to the Geffen Wing of the Los Angeles Museum of Contemporary Art, April 16, 2011

Today's absurd prices of "the people's art" and "this breakthrough means of authentic expression" and "commentary on pop culture with an investment value" will all come crashing down. The only thing different is calling it "Street Art" instead of "Neo-Expressionism". Same crock catchphrases to describe sloppy, mediocre painting, different decade and different conniving slackers playing the role of "the anointed one". What Street Artist out there will retain their value? Don't look to those investment fat cats to pick a winner. Their insipid charts told them Las Vegas real estate was a good bet in 2008. Don't look to the galleries. Their inventory exists specifically to soak investors in a scheme that would be labeled money laundering if the art market would ever become regulated. In boom markets, which the street art thing is at this moment, galleries pick artists in the same manner you pick your nose: the biggest available ones get picked and discarded and then there is a digging around for whatever is left that is from some of the same batch as the big one. 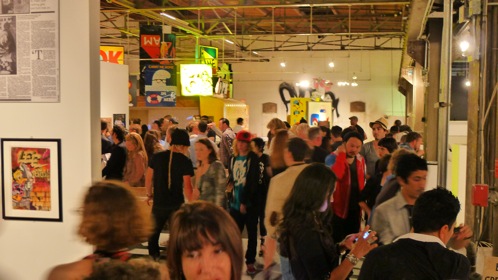 There is no denying the popularity of Street Art, much like the late 1970s Disco craze.

Many a connoisseur of Neo-Expressionism wishes they had followed the old adage that Street Art buyers would be wise to heed: Sell when they are buying and buy when they are selling. If you love street art, sell it all now. You will be able to buy it all back for cents on the dollar in a few years. Of course, it might look uglier than bad 1980s Neo-Expressionist painting did in 1992, once the "keepin' it real" hype had faded. It might take a decade or it might take a summer but the Street Art market will be pushed over a cliff. And the art world lemmings are definitely headed in that direction. Remember, the Bee Gees once ruled the airwaves and then one morning they were a joke.

So in light of this superficial disco-era history I've offered, ask yourself, do you really see Banksy's market "Stayin' Alive"?

All photos by the author.