This is New York right now. Blistering smells of bubbling soot from the street. The Brooklyn artist and poet of the streets whose moniker is Elbow Toe gets up early to "go to work" on the subway, where he rides and draws portraits of his fellow riders in a sketchbook before returning to his studio. It's there, in the air-conditioned underground, that he wakes up and re-connects to his city, loosening up the lines so that they can wend and bend freely, and jotting a little text as it manifests. 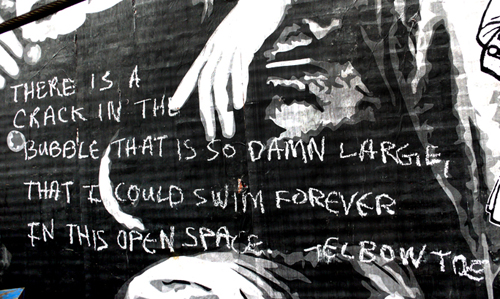 His impressive body of work, including linotype, painting, and collage continues to grow and develop both on the streets and, in the last couple of years, into galleries on both coasts and across the pond. Recently kicked out of his studio (another New York artist story), he has settled in to working at home on a new collage series using ripped and shredded paper to create quite detailed pieces that from a distance look like paintings.

BSA: Have you done any work in the new studio yet?Elbow Toe: The new studio is suitable. I lost the last space when the landlord got in a dispute with the owner and forced us all out. I have been in the new space for a couple of months at this point and it has seen it's fair share of work. I am primarily working on collages. At this point I have converted part of my residence to a studio. I have done well over a half dozen collages at this point so the space is pretty broken in. If I had one complaint it would be that I wish I was in a studio building again so that I could just shut the door at the end of the night. As it is, the pieces sort of nag away at me. Who knows, it might make them just that more intimate with my psyche. 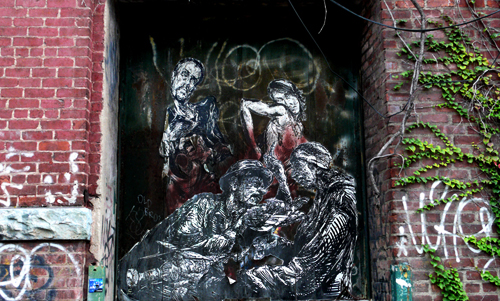 BSA: You touch on political and social themes in your art. Are you a news junkie?Elbow Toe: I am a news junkie. It certainly doesn't help that I get into bouts of listening to NPR for 8 - 10 hours a day. It really makes for great light small talk in social situations, let me tell you.

BSA: What's the environment that you like to create in your studio while you work?Elbow Toe: When I start a piece I like the studio to be pristine. By the time I have completed the piece there is very little space to stand, and it is quite visually painful as there is basically a storm of color all over the floor. I generally get so pulled into the process that the chaos works to my advantage as I tend to know where every piece of paper is amidst the chaos. The real problem that arises is when I set my keys down in the studio by accident. 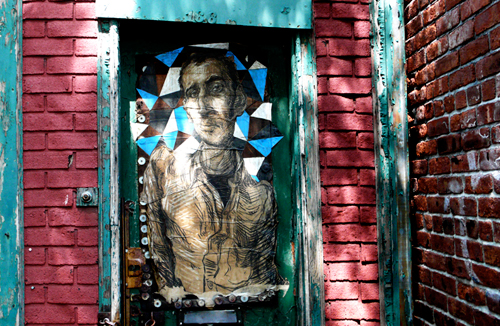 © Jaime RojoBSA: You are known to write a bit of poetry - what brings it forth? People on the street? Books you read? Elbow Toe: The quotes that I write around town... They tend to just well up from somewhere inside me. I go draw (in my sketchbook) on the subway in the mornings to warm up, and when I really drop into the work, they just sort of present themselves.

I like the Haiku masters Basho, Buson and Issa. There is such a compactness to the form. And the work is so humble.

I have been a fan of Sharon Olds for some time. There is such a vocal quality to her work. The rhythm is so strong that it completes the ideas perfectly that she is conveying. A particular favorite book of hers is The Father. Amazing. 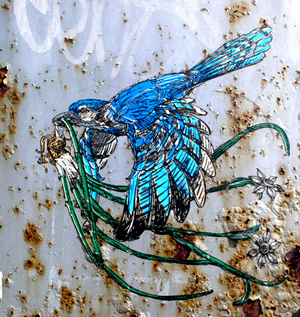 © Jaime RojoYou can see Elbow Toe's newest piece at the Perry Rubenstein Gallery in a collage based group show, "Shred." You can also read an interview with the show's curator, Carlo McCormick.

A version of this post originally appeared on BrooklynStreetArt.com