At first glance, street artist Julian Beever's sidewalk creations look like unfinished chalk drawings of oddly morphed animals or landscapes. But if you happen upon the one perfect angle, the image magically snaps into shape, showing you a giant charging snail or an aerial view of Times Square. So how does he do it? 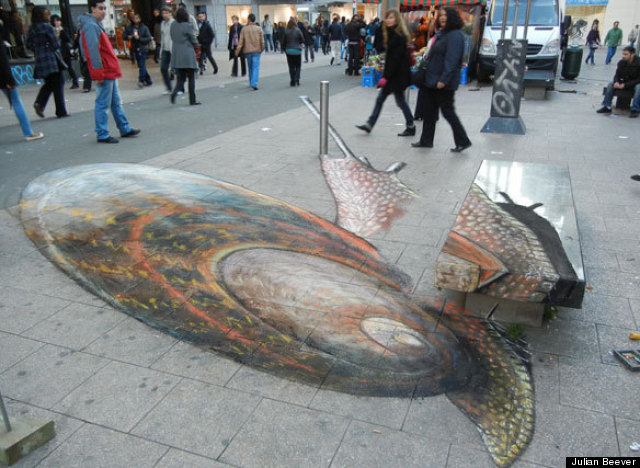 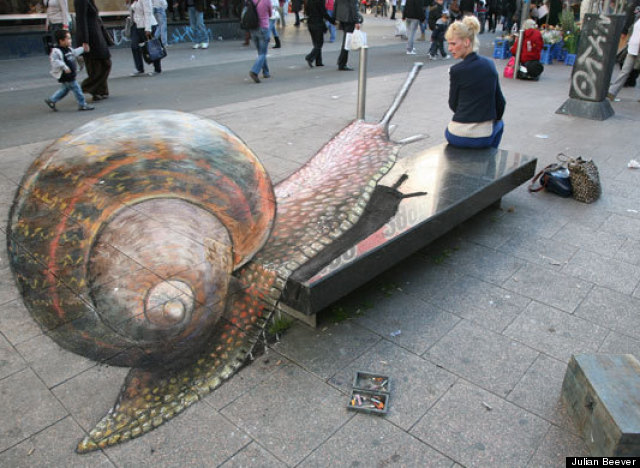 The process is called anamorphosis, which involves drawing a distorted image which gives the impression of a three-dimensional scene from a certain vantage point. According to NPR, the talented artist sets up a camera or a viewfinder in the specific spot he intends his viewers to stand and draws his killer whales and beachy snapshots from that perspective. So if a passerby views the work from that same perspective, the drawings jump to life in their three-dimensional glory. But if they stand from any other position, the chalk creation appears to be elongated fragments of an incomplete design.

Beever began his pedestrian-friendly art in Brussels and has since been dubbed the "Pavement Picasso," as he states on his website. He prides himself on the public appeal of his work and credits the Internet for bringing his street art to the world stage. In the past decade, his work has adorned the streets of the UK, US, Turkey, Chile, Japan and other major cities.

We love the magic of these 3D imaginations and especially enjoy all the children who were put in chalky peril to make these photographs even better. (Watch him draw a giant Ferris wheel in Santiago in the video above.)

See a slideshow of the work here: