Yes, Banksy is here. The giant "Art in the Streets" show opening this weekend at the Museum of Contemporary Art in Los Angeles gives a patch of real estate to the international man of mystery who has contributed greatly to the worldwide profile of this soon to be, maybe already, mainstream phenomenon known as street art. A smattering of his pranksterism is an absolute must for any show staking claim to the mantle of comprehensive survey and an excellent way to garner attention. But "Streets" gets it's momentum by presenting a multi-torch colorful and explosive people's history that began way before Banksy was born and likely will continue for a while after. (Read more below slideshow)

The show is an audacious many-platform and colorful endeavor; part history lesson and part theme park bringing about 50 years of graffiti and street art history, it's influences and influencers, under one roof. Then there is the stuff outside. Engaging and educational, "Art in the Streets" makes sure visitors have the opportunity to learn how certain tributaries lead to this one river of swirling urban goo, mapping connections between cultural movements, communities and relationships within it. When it does this, the museum system effectively differentiates its value apart from a mere gallery show.

"It is very inclusive and community oriented," said MOCA director Jeffrey Deitch as he warmly colored the street art and graffiti scene at a heavily attended press conference outside the Geffen Contempory while standing in front of a bus painted by LA graff writer Risk. "Virtually every great artist in this field is participating in the show," he intoned.

Truthfully this show focuses on that community spirit he referred to as much as it does the work of the artists. For Deitch and Co. each player involved and referenced in "Art In the Streets" is part of a continuum in a series of subcultures mashing together including artists, writers, documenters, scenesters, gallerists, rappers, punks, skaters, designers, performers, collectors and straight up fans.

With bookends of New York and Los Angeles, the story also goes into international influences from Sao Paulo, London, and other European hotspots for the scene. But it's the LA-NY connection that runs this narrative that includes nearly 30 solo artist exhibitions and installations, recreated historical spaces, ephemera, a mini skate park, and even a pink bubbled installation across the stalls of the ladies bathroom by graffiti artist Andre. "Art in the Streets" swings and swerves through five decades bi-coastally in a wild style with a Cosmic Cavern by LA's Kenny Scharf, a recreation of New York's Fun Gallery under the direction of one of it's original co-directors, Patti Astor - complete with façade and a Jean Michel Basquiat painting hung in the window, work from current LA active graffiti writers Revok, Saber, and aforementioned Risk, an installation by Mr Cartoon spotlighting lowrider culture, and a historical graff section including a the coat worn by New York's Freedom for over a decade straight.

No show on this worldwide phenomenon could ever hope to include everyone, and Jeffrey Deitch, along with associate curators Roger Gastman and Aaron Rose have chosen touchstones and flashpoints that punctuate and illuminate their individual visions of how the story has unfolded thus far. Deitch wisely chose these two well-placed pillars on the scene, who expand the shows' reach and view into skater and punk territory, complimenting the hip-hop and downtown New York world he has cultivated.

Addressing the inevitable complaints that the show doesn't include everyone's favorite artists, Rose talks about simple logistics, even as he is confident with the choices. "Obviously there are omissions, there will always be omissions, I mean it is impossible. We would have filled every building in downtown LA and there still would have been omissions because it is just that vast."

Omissions aside, Mr. Rose talks about "Art in the Streets" as a historical event itself and praises the efforts of curatorial coordinator Ethel Seno for her knowledge and vision. He also credits the shows success to the camaraderie and work ethic of the participating artists. "The artists really brought it. I've done a lot of shows with a lot of these guys over the years and this is not our first install. This time is a hundred-fold of what I could have expected in terms of quality and dedication and a spirit of friendly competition. It's not adversarial at all but the one-upmanship that is inherent in this kind of work came together in the best possible way."

For Gastman, a self-professed graffiti nerd who donated much of his home collection of archival graffiti cans and ephemera to the show and just published a tome called "The History of American Graffiti" with Caleb Neelon last week, the show is about recognizing the contributions of graffiti to culture. "This show represents 30 or 40 of the best artists that have come from graffiti/street art/skate movements from around the world who have helped push the levels of the art and have helped get it taken seriously based on its artistic merit. We have to pay respect to the history."

The timelined section of graffiti history he curated includes a sleeveless green military jacket from Bizarro, a section devoted to Richard Hambleton and his spastic shadows on Manhattan's Lower East Side in the 1980s and sections devoted to Freedom who, "transitioned into street art without even knowing what he was doing. He painted something like 70 murals in the tunnels over a period over 15-20 years, and the tunnel ended up getting named after him."

Naturally, visual documentarians of the scene are given a fair amount of space in the show, as without photographers and filmographers, the output of this largely ephemeral art would be forgotten history. Included are Terry Richardson, Spike Jonze, Martha Cooper, Steve Grody, Gusmano Cesaretti, Estevan Oriol, Henry Chalfant, James Prigoff, Ed Templeton and Larry Clark. Photographer Martha Cooper, who with fellow photographer Henry Chalfant documented the vibrant New York City subway graffiti scene in the 1970s and 1980s was invited to show her work in a room next to Henry's, "[Street artist] Aiko pasted 170 of my pictures on my wall. I didn't paste them. I don't know how to paste. She also put up like 800 of Henry's trains, like wallpaper. Henry did strips of painted trains across the wall so it looks like bricks."

Mr. Gastman gives this description of Chalfant's installation, "Sixteen feet tall wall - all cars of trains that Henry shot in the late 70s through the mid-80s. Seeing them all here together is mind-blowing. Futura I think said it best, "This is like a cemetery." As moving as it is for me to stand in this room, I can't even imagine what it would be like for someone that was part of this scene painting these trains."

Looking at the entirety of the show as it comes to fruition, Fab Five Freddy, filmmaker and artist who was part of the downtown New York scene in the 1980s hanging with Basquiat, Haring, and Futura, says the show helps make all the connections for those who care to understand how we got this far. "It's an overwhelming amount of stuff but it tells a brilliant story about how all these scenes developed, who helped set it off, and then ultimately how they all really connect." 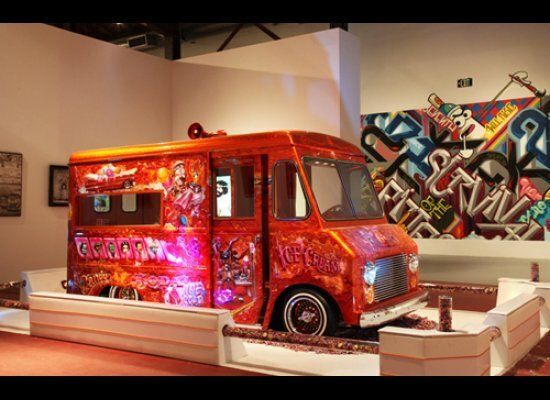