A few months ago, I met a man named Kiley Jon Clark who teaches meditation to the homeless in San Antonio, Texas. My curiosity piqued. I asked him to tell me more about what he calls HMP Street Dharma (HMP stands for Homeless Meditation Practitioners).

What's the purpose of meditation?

"In Tibetan, the word for meditation means, 'To become familiar.' We are trying to become familiar with ourselves -- with how our minds work. It all starts with being here, in the present moment.

It can be very unsettling when you realize just how frantic your mind really is. Just try it. Stop, sit down, stay in the present moment and think of nothing but your own breathing. You may find, like Buddhist elders have said, that the mind is like a crazy monkey swinging from thought to thought and from past to future. Our brains do not know how to relax." 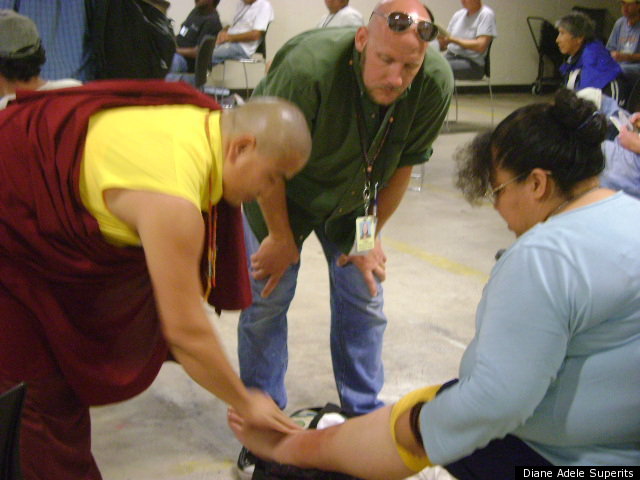 But how can the homeless meditate if they are in a critical situation like homelessness?

"Our main aim of working with the homeless is just being with them. It is about everyday interactions. And those who ask for meditation instruction will gladly get it.

"Like most of us, the homeless have been listening to the same negative thoughts in their heads for years. 'I'm so stupid.' 'I'm such a mess.' 'I can't do this anymore.' 'I wish I were dead.' Everyone has this negative mental chatter going on all the time and we don't even recognize it.

But once the 'monkey mind' is revealed through meditation -- once we start being present with our thoughts as the observer of them -- old thought patterns get broken and things begin to change in our lives.

This is as true for the homeless as it is for anyone else. Whether or not you have a roof over your head has nothing to do with quieting your mind, getting to know yourself and being fully awake."

What does your work entail?

"We go to the streets to the homeless and also teach at a facility called 'Haven for Hope.' Working this way provides freedom to just be ourselves and make friends. Interestingly, this is what both Jesus and Buddha did. Although they both held services and preached, they spent the majority of their lives simply being the message of love and compassion. They lived with the poor -- both Buddha and Jesus sat with, talked with, listened to, ate with and shared the suffering and grief of the people."

What's your own personal story? How did you come to be doing this work?

"My story is a long one, way too much to tell here. But the short version is, I was raised in an alcoholic home and became one myself. I've dealt with clinical depression, divorce, death of loved ones and jail. But, in 2006, I met a Tibetan Lama at the San Antonio Airport, of all places. His name is Lama Tulku Tsori Rinpoche and he runs a monastery for Tibetan refugee children in Mainpat, India.

Meeting this Lama changed the whole course of my life. He has been my guiding light and inspiration.

If you were going to be a meditation teacher, why teach the homeless? Why not upscale people who want to meditate?

"Neglect is something most children of alcoholics feel, so I think my childhood made me especially sensitive to the loneliness and suffering of others. Among other things, the homeless also suffer from personal neglect. When you have lost everything, it is easy to lose yourself, too.

As a Buddhist, my life should reflect my beliefs. Most people's lives are usually driven by unfulfilling desires and cravings for money, status, material goods, sensual pleasures -- things we think will make us happy, but don't.

Instead, why not be completely motivated by compassion, generosity, loving-kindness and wisdom? Can you think of a better alternative?"

Can non-Buddhists be involved in this outreach?

If you would like to become a homeless outreach worker, Buddhist or not, feel free to contact us. We will be living, learning and practicing together. Or, if you'd like to support our work with contributions, we gratefully accept. The need here is enormous, so we welcome your help and support."

What about dangers you might face ... any antagonism from the homeless?

"In my experience, there is very little violence among the homeless community. They often have fights among themselves, but rarely, if ever, is that violence directed at people outside their peer group."

Can you give me an example of how meditation has helped a homeless person?

"When we were doing the meditation group inside the emergency shelter, there was a man named Dino. He was reclusive and angry when he first started coming to group. Little by little, he started opening up. He would share a little more about his life and what he was feeling every week in the group.

"After several months of these weekly meditation groups, he was a very different person. Dino told us that he would use these meditation techniques to keep his mind tranquil and calm throughout the long nights at the shelter. He often spoke about his daughter, from whom he was estranged. We gave him a Tonglen practice to help with this. It was a visualization of taking in the negative energy between him and his daughter, and releasing it back as light, love and healing.

"One day, Dino came up and gave me a big hug. He said that he had called his daughter after years of not speaking to her. They both cried and talked for hours. She sent him a bus ticket, and as far as I know, he is living with her somewhere in Oregon."

It's been fascinating talking with you, Kiley. Any final words you'd like to add?

If you would like to support HMP Street Dharma, go to www.ytdr.org and make a donation for 'Homeless Meditation.' To contact Kiley Jon Clark directly, email hmpstreetdharma@gmail.com.