Paolo Cirio has a problem with Google.

Specifically, Cirio's beef is with Google Street View, the web giant's mammoth project providing 360-degree street-level viewings of the world's cities. He sees a conspiracy in it, or at the very least, a win of profit motive over principle.

"It's interesting to me how a company can takes pictures of the all world's streets and sell them back to people, assembling basically an huge repository of the world and monopolizing it. We all know that knowledge means power," Cirio says of Street View, in emails to the Huffington Post (Google Street View is free to use, but that hasn't stopped Cirio's crusade).

To draw attention to Street View's problems, Cirio's turning what he considers the most problematic aspect of the project, the permission-less photographing of people, into art. To do this, he's taping pasteboard images of people who appear on Google Street View on walls in Berlin, London, New York, and more cities, if he can help it. He says fellow artists and viewers have already contacted him and asked if they can put up images inspired by Cirio's Street Ghosts project in Hong Kong and Sydney.

Wrote Cirio to the Huffington Post, "I'm going to ship posters ready to affix on walls to everyone who asks me, in order to spread them everywhere."

A former street artist turned digital, this is Cirio's first piece that combines the two contexts -- so it's no coincidence that many of his photos show up next to old, elaborate lines of graffiti (Cirio says he looks for walls where the posters "can stay as long as possible"). We at Huffington Post exchanged emails with Cirio, who since 2002 has been traveling the world redistributing books found on Amazon and promoting a project that encourages peer-to-peer money-sharing using mock-VISA cards.

What inspired you to do this project?

My work is about the power of information and so it often addresses abusive Internet companies…In this case, I reverse the abuse of power by Google simply through visual exposure. I didn't need to hack or process any data—they’re just printouts of screenshots. It's simple to show how controversial and critical the information that Google collects is, just by putting it in another context.

What do you think of Google Street View, with regards to the privacy issues?

I find Google especially problematic, when it comes to privacy. I find Google Street View quite invasive in general, but Google just doesn’t care about anything. They could take pictures only during [particular] times of the day or alert people before they pass by with the car, which wouldn’t undermine privacy, or just try to have manual control over the pictures that they take, as all the content of YouTube is checked. The reason is that people in the streets are actually valuable information for Google to resell to its users.

Did you contact the people who appeared on Street View and ask if it was okay to use their images?

The people that I found, printed and affixed to the walls are totally random, there isn't a way to contact them.

What has been the best reception your project's gotten? The worst? The most unusual?

The funniest feedbacks were from people who sent me the links to themselves on Google Street View asking to be printed and became an art piece of mine.

Have you contacted Google about this project?

Not yet, but it may happen soon, if the media and people keep talking about that. Legally, I'm violating the copyright of the images that Google pretends to own, but more important, this project may influence the verdict of next time that Google Street View will be debated in a court case.

What are you planning on doing next?

I've quite a lot of interesting information from Twitter and tax havens users [sic].

Take a look at some of Ciprio's Street Ghosts (below). 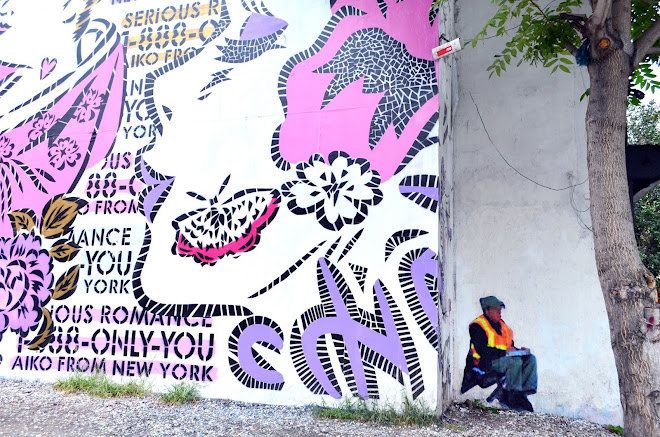