You're walking down the street trying to get to work. You see a group of men standing around, eyeballing you, then one of them lets out a "Hey baby," or something equally nauseating. This, unfortunately, is just a mild example of what a recent survey revealed -- street harassment is everywhere.

The Stop Street Harassment Organization released a report, concluding that 65 percent of women surveyed have experienced some form of street harassment. Specifically, 23 percent have been sexually touched and 20 percent have been followed.

Here's a chart that summarizes the findings: 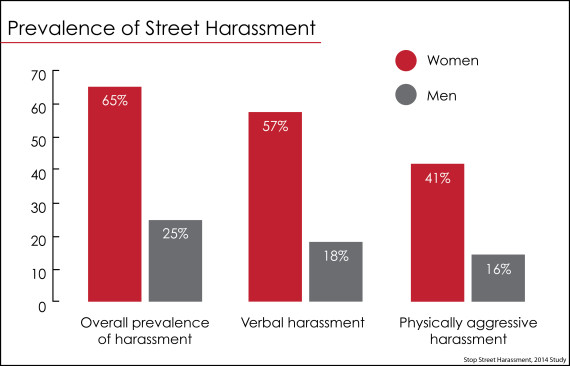 Holly Kearl, the founder of SSH, joined HuffPost Live to discuss the report and explained that women aren't the only ones who fall victim to this harassment -- men do as well, most commonly those within the LBTQ community.

"It's much more severe for women, but, both men and women reported that it was primarily men who were their harassers. So, we really have men who are feeling entitled to women's bodies and then also in a sense to men's if they don't feel like they are meeting gender norms, and so they are doing a bit of gender policing," she said.

In conclusion, let's let everyone cross the street in peace.

Watch the full conversation about street harassment below: