"It's constant, it's inescapable, it's hard to get away from."

"Cat-calling is an all-American past time," Jennifer Pozner notes, pointing out scenes depicting street harassment in "Sex And The City," songs from the '50s and '60s and even children's cartoons. Cat-calling has become so engrained in our culture that we often fail to even recognize it.

Street harassment is considered to be any unwanted gawking, whistling, commenting and/or physical contact.

"Street harassment is about ownership," Pozner says. "It's about the idea that women's bodies and very presence in public space is not for [her]."

As one interviewee points out, no matter how many male allies women have, men truly don't understand how different it is for women to walk down the street. Street harassment is not "a compliment" and women definitely do not "secretly enjoy it." And while we fully support the women who choose to respond to their harasser(s), the very real fear of escalation, or even physical violence, can stop women from standing up for themselves. 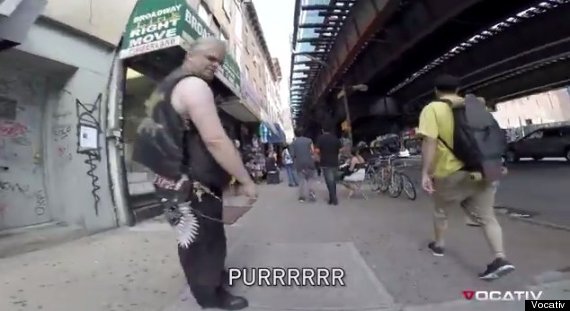 Anti-street harassment advocate and Cornell professor Cynthia Grant Bowman perfectly described the insidious affects of street harassment in a 2013 interview with The Atlantic: “There are kinds of things that are drip, drip, drip persistent -- not cutting or injuring you -- but persistently denigrating behavior that can feel bad and be scary."

Street harassment forces women to change their everyday behaviors, from taking a different route to work out of fear to wearing clothing that may not draw as much "attention."

Of course a whistle on the street is not a physical attack, but it reflects the same sense of entitlement over women's bodies that could lead to one.

"Street harassment is almost like a gateway drug to other, more serious forms, of violence," Pozner said. "The idea that women don't control their own bodies is so connected to the culture that allows women to be sexually assaulted."